Guitar Festival brings together guitarists from around the world 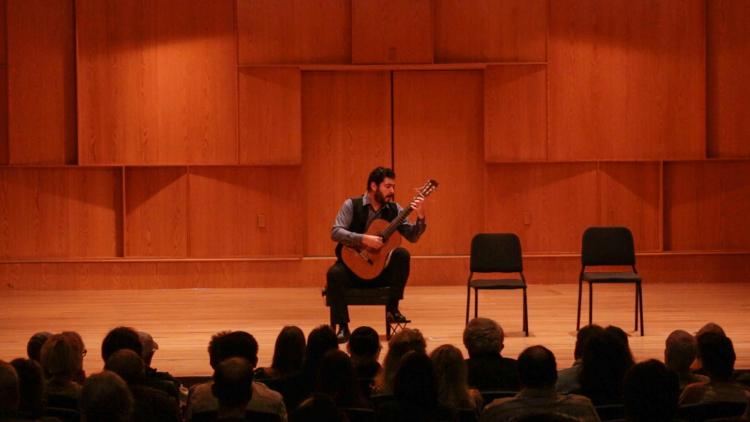 Every couple of years, about a month before CU’s legendary Conference on World Affairs, the College of Music hosts another international gathering in Grusin Music Hall.

Nicolò Spera is the director of the Ritter Family Classical Guitar Program and organizer of the CU International Guitar Festival, happening at the College of Music March 8-10. Since 2013, he’s brought guitar lovers, aficionados and virtuosi to Boulder for a long weekend of moving performances and a friendly competition among some of the best guitarists in the world.

He’s proud of the event, which he says is always eye-opening for musicians who often play their instruments by themselves. “For guitarists and guitar students, it’s important because we spend so much of our time practicing alone. Here, we get to meet so many people who do what exactly what we do.”

The social aspect of the guitar is important to Spera, who started playing the instrument as a child growing up in Italy. He was shy and hoped that by playing guitar, he might make friends.

“It started as a very lighthearted hobby. Then one day I went to a guitar concert and I couldn’t believe what I was hearing. That’s how I began to play more seriously, and since then, I have been blessed with many lucky moments and meetings that have helped me to keep playing.”

Spera was the first member of his family to play music. Today, he considers it his responsibility to share a love of music with those around him, from his toddler daughter to the students in his class and the Boulder community. This year’s CU International Guitar Festival includes more female guitarists than ever before—something Spera says is a good sign.

“Guitar tends to be a male-dominated world. It’s good to be part of this conversation, to get more young women playing guitar and applying to the program. Hopefully this means something is changing.”

There’s also cultural and historical diversity in the music to be performed on the multi-day program: Italian lutist Elisa La Marca and Cuban guitarist René Izquierdo will perform on Saturday night, March 9, in a concert of the Italian Renaissance juxtaposed with Cuban tradition.

On the opening night of the festival, featured performers and artists-in-residence SoloDuo play an intimate concert in Grusin Music Hall. Add to that competition entrants from Korea, Costa Rica, Serbia and everywhere in between, and Spera says it’s easy to see why the CU International Guitar Festival is so popular.

“Each country has a different way of approaching music, and it’s amazing to me that for three days, all of these people come to Boulder to see what other people are doing in other parts of the world.

“Because we’re all human. I always want the festival to be inspiring, and in this moment, in this country, I hope it’s even more inspiring and important this year.”

The CU International Guitar Festival is March 8-10 in Grusin Music Hall. The events are free and open to the public. For more information, visit cupresents.org.

Curiosity drives Lydia Wagenknecht, a PhD candidate in ethnomusicology and recent recipient of a Fulbright Research Award. “I care that my research will help us understand something in a more broad-based way that we didn’t understand before,” she says. END_OF_DOCUMENT_TOKEN_TO_BE_REPLACED

We’re so excited to welcome alumnus Damani Phillips back to campus this week and to present him the College of Music’s 2022 Distinguished Alumnus Award at our commencement ceremony on May 5! “The versatile training provided by CU has been the cornerstone of my success to date, and has enabled me to do and be many things well beyond typical expectations,” he says. Meet Phillips and discover his powerful advice to graduating Music Buffs. END_OF_DOCUMENT_TOKEN_TO_BE_REPLACED

On May 5, we look forward to welcoming back Judith Glyde, formerly professor of cello and chamber music at the College of Music and chair of our string faculty. Since retiring in 2014 to live in New York City, the professor emerita she has been active with the college’s alumni community there, offering tremendous support to Forever Buffs who are now living and working in the city. END_OF_DOCUMENT_TOKEN_TO_BE_REPLACED
Return to the top of the page