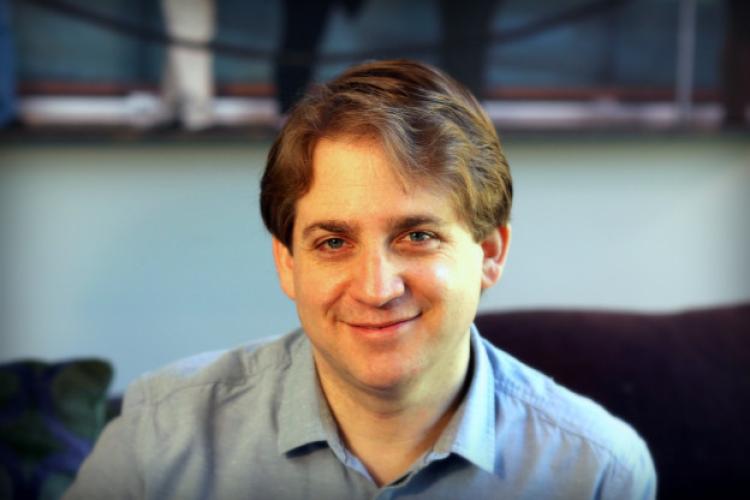 This month's College of Music Alumni Spotlight focuses on Sam Estes, the Los Angeles-based founder of composition software Amper Music and co-owner of Sonicsmiths. We last talked with Sam and fellow alum and Amper Music systems architect Cole Ingraham in 2017.

After earning a master’s degree (MM '05) in composition and technologies at the College of Music, Sam Estes kicked off his career working for Tom Holkenborg (Junkie XL) as his primary assistant, doing sound design studio music tech, conducting, composition and orchestration.

“At CU, I got a lot of behind-the-scenes experience working with Recording Engineer Kevin Harbison at Macky Auditorium,” recalls Estes, also referencing the formative influences of Assistant Director of Production JP Osnes; Associate Professor of Composition Michael Theodore; and Composition and Music Technology Senior Instructor John Drumheller. “A large part of what I’m able to do in my job follows my work experience at CU in conjunction with my studies.”

During his years with Junkie XL, Estes worked on several films—including “Blind” and “Dead or Alive”—along with video games, including “Need for Speed: Pro Street,” “SSX Blur” and “The Sims.” Estes also assisted Holkenborg on an album and a number of remixes, including Madonna’s “Seven Minutes to Save the World,” which was nominated for a Grammy Award. Additionally, Estes’ experience comprises a stint with Remote Control Productions (Hans Zimmer) as U.S. sample department manager. At RCP, Estes expanded the department and led his team in designing sounds for movies such as “Angels and Demons,” “Sherlock Holmes (1 & 2),” “Pirates of the Caribbean IV,” “Inception,” “The Dark Knight Rises” and more video games.

“The College of Music enabled me to explore the breadth of what’s possible and understand how to approach music from a technological level,” he says. “My time at CU really prepared me for what I’m doing now. I had the freedom to study film music and pursue how to approach music on my own.”

Indeed, Estes—a bassoonist, vocalist and pianist—specializes in taking a compositional approach to sound design, and his knowledge of both unusual instrumental acoustics and digital manipulation lends itself to a never-ending source of new and interesting sonic possibilities. Today, he co-owns Sonicsmiths with Michael Hobe, offering a new sound design creation tool—The Foundry—for composers and sound designers. The Foundary draws from more than 15,000 samples and 19+GB of sample content, and offers trillions of ways to manipulate and combine the sounds—including AI.

“What we do means you never settle for presets again,” explains Estes, who also says he had a sense of his career direction by age 3. But his success is hard-earned, having evolved from what he calls a “pain point.”

“When I moved to Los Angeles in 2006, I was still under the impression that you get into the film music industry by pen and paper, submitting your music, getting it worked with and getting in front of an orchestra,” he recalls. “That’s not at all how it works anymore.

“There was a huge shift between 1996 and 2000 when scores were demanded in advance, which then had to be chopped up in pieces if a scene was cut or changed … and you’d have to revise and write all over again under time pressure. It wasn’t a good workflow, but I did it for years, averaging two hours of sleep a night … I think my longest shift was 72 hours just trying to get stuff done. It was one project after the next and if you stopped working, maybe you wouldn’t get called back.”

Eventually, he set out to solve that pain point and he’s excited about the potential of Music Buff Connect, the College of Music's new alumni engagement platform, to attract the employees and collaborators he seeks. “We need to hire a lot of people and I’m really impressed with the quality of people coming out of the College of Music who are prepared to enter this new and unique field,” he says, having already hired a few Music Buffs and eager to bring on more. “Submit your résumés!”

Assistant Professor of Composition Annika Socolofsky blends the realms of art and science through the Instrument Design Lab (IDL). The course offers a science-based context to instrumentation, sound and musical creation, giving College of Music students a foundation in the science of music. END_OF_DOCUMENT_TOKEN_TO_BE_REPLACED

It was a busy fall for the American Music Research Center (AMRC)! One of the... END_OF_DOCUMENT_TOKEN_TO_BE_REPLACED

Friends, My heart is heavy. Associate Professor of Violin Charles (Chas) Wetherbee passed away on... END_OF_DOCUMENT_TOKEN_TO_BE_REPLACED
Return to the top of the page