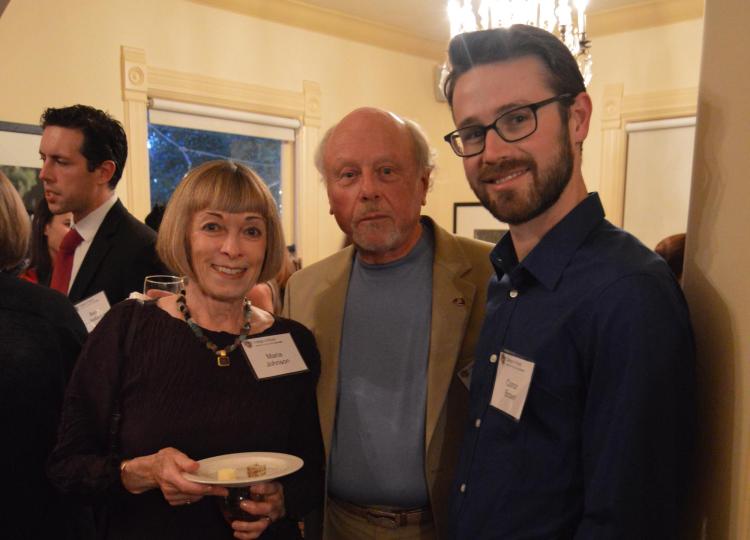 Don and Maria Johnson are generous supporters of the College of Music and the College of Architecture and Planning at the University of Colorado. They are active in providing scholarship support and creating international cultural exchange. The couple has a strong connection to Finland, Maria’s native country. Three years ago, they offered a special scholarship to a graduate music composition student to write a piece celebrating the 100th anniversary of Finnish independence. Conor Brown’s “Ladun hiihin lau lajille” has become the centerpiece for three upcoming concerts sponsored by the College of Music to mark this important anniversary.

Associate Professor of Composition Daniel Kellogg recently sat down with Don and Maria to talk about their involvement with CU and this particular project.

Daniel Kellogg: What is your connection to CU?

Don Johnson: I am the third generation [in my family] to attend the university. My grandfather graduated in 1907 as a medical doctor, and my aunt and mother both graduated from the University of Colorado. One of my sons graduated from CU and we’re working on the fifth generation right now – three more years to go.

Maria Johnson: My connection to the university is Don, and I am on the advisory board for the College of Music.

DK: Maria, How did you come to study in America?

MJ: There was no way to study higher-level education dance in Finland. That was the reason I came. I did my undergraduate study in physical education but I had always danced and been involved in theatre productions. Then I decided I had to study elsewhere, and there was no other way than applying for a scholarship; I got the Fulbright. I visited a friend of mine at UCLA who was doing the same program that I graduated from. I decided that it is a great school and I want to go there.

DK: What do you remember about coming to study in the U.S.?

MJ: First, you had to speak foreign language all of the time and it is really exhausting in the beginning. Second was that you had to drive everywhere. That was exhausting on top of the whole program that was eight to 10 hours every day. But otherwise I just loved it. I jumped two feet in and have been going on ever since. I’ve never looked back.

DJ: The Finnish Initiative—that's been going on for about five years. We’ve had three different students with a full scholarship at CAP for their master’s degrees. Two have completed and we’ve just started with our third, who is a Fulbright Scholar from Finland. He is the first Fulbright Scholar to attend the University of Colorado in architecture; he is very bright, as you would expect.

We’ve expanded from that. Starting this year, we are offering a scholarship to one student to attend the Wood program at Aalto University in Helsinki. We’ve just sent 15 students (from CU) that spent three weeks in Finland with two professors,sketching, moving around the country, learning.  We’ve also had lecturers come here and we send some there. We are doing a faculty exchange as well as a student exchange. I consider both equally relevant.

DK: Why is it important to make sure international experiences are available to students?

MJ: They are more free to go—they don’t have families as a weight, it’s cheaper, their minds are still molding and their ways are shaping. It is a big change for them and it might change their whole thinking about the future. It’s also important when they come back that they share their experiences with their peers. They teach something when they come back about another culture.

DJ: They are at a formative point in their lives. You can take a lot of time off at this point. I would encourage all students when they graduate to take a year off and travel and learn. Go, travel for a period, and come back and tell us what you have learned.

Those who take in the culture of the world realize that you are not the single spark of creativity on the planet. There is a whole world full of people with ideas that have done things that you can learn about and build upon. This broad exposure made so many great giants in fields of creative endeavor.

DK: Three years ago you created a scholarship at the College of Music to recruit a graduate composition student to create a piece of music in celebration of the 100th anniversary of Finnish independence. We selected Conor Brown. Why did you send him to Finland for 10 days?

DJ: You have to feel the culture and you can only do that by going there. This is a really important contribution to his piece.

MJ: Eating the food, experiencing the people, everything…

DJ: Something that is unique to this piece is the accordion. Conor would have never used it had he not gone to Finland, met the man with the accordion, played with these people in Lapland above the Arctic Circle and really took it in—what the accordion means. It's a really important instrument for Finnish folk music.

DK: What did he tell you about his trip?

MJ: [He told us all about ] how he immediately was immersed in the music world there. It was so interesting how it happened and it was almost like it was meant to happen.

DJ: I think it is because music is an international language. He doesn’t speak any Finnish, but he went up there and [he and the local musicians played] music together. Neither speaks the other’s language and so it really opens those doors and I think it is so fantastic.

MJ: And the fact that he says “I like the darkness”—which no one in Finland likes—that was so surprising. A boy from Colorado who lives with the sunshine and loves the cold and the dark.

DJ: and you can’t imagine dark like Finland. You really cannot.

DK: Have you heard that one of our alumni, Alicia Baker, will sing the Finnish text while playing the accordion at the Faculty Tuesday concert on Oct. 24?

DJ: I’m almost in disbelief that this can be done, like she is a Finn—it is absolutely phenomenal. It will blow away the Finns who hear it. This is not some superficial treatment of the Kalevala. This is an in depth spiritual look at what it is to be a Finn.

DK: What do you know about Connor’s piece?

DJ: He has taken up the Kalevala, [which is a] Finnish folk epic. He has a very interesting take on one of the tales. He understood enough to get it together. I’m astounded at his ability to grasp a lot of Finnish ideas, some of his pronunciation and his meticulous detail.

DK: This is the first time you’ve commissioned a piece of music, and it will be premiered in three venues including the Finnish Embassy in Washington, D.C. What are you thoughts?

DJ:  I’m astounded. It was just one idea and it has taken off. Originally we thought it would be nice to have a piece in honor of Finland’s 100th celebration of independence from Russia. It amazes me what one idea can do in the world. Conor made this trip and he may be going back. He may inspire others to go. Three faculty at the College of Music, including Dean Shay, are going to go to Finland and a faculty member from the Sibelius Academy is coming here. It keeps spreading and it is just fantastic.

MJ: I want to be surprised by it. I don’t like to hear the end of the film before I see it. It will be so exciting to hear it.

DJ: I’m especially excited to hear it in Washington, D.C. at the Finnish Embassy. That's the part that blows me away. The performances in Denver and Boulder I figured were highly possible. But to take the group and have it performed in D.C. with an actual invitation from the ambassador… I’m astounded! We’re taking over the embassy for that evening.

MJ: And we are the ambassadors for the College of Music!

DK: The University of Colorado is grateful for your ongoing support of our students and our programs. Why do you have such a strong commitment to Colorado?

DJ: I’ve always loved Colorado. I was raised here. This is our home. Our family has been here since 1903 and will probably be here quite a bit longer. I love everything about living here.

DK: What inspires you to give scholarships?

DJ: I was walking around Norlin Library earlier today. It is so exciting to see these young students so full of energy. I see their smiling faces so happy, and at the same time I know there is a degree of fear. “Will I succeed? Will I do well at this?” I see the family’s’ aspirations for their children. Many times they put a lot on the line financially to allow them to have this opportunity.

That is why we give the scholarships that we do. Debt is such a deadly thing to graduate with.I hear many moving stories. One of the our undergraduate scholarship students at the College of Music said, “I would have never been able to get a college education had you not helped. I am the first person in my family to receive a college education.”

MJ: That is great!

DJ: Maria and I have this opportunity to channel lives long after we’re gone. I think that this is the most amazing thing.

Assistant Professor of Composition Annika Socolofsky blends the realms of art and science through the Instrument Design Lab (IDL). The course offers a science-based context to instrumentation, sound and musical creation, giving College of Music students a foundation in the science of music. END_OF_DOCUMENT_TOKEN_TO_BE_REPLACED

It was a busy fall for the American Music Research Center (AMRC)! One of the... END_OF_DOCUMENT_TOKEN_TO_BE_REPLACED

Friends, My heart is heavy. Associate Professor of Violin Charles (Chas) Wetherbee passed away on... END_OF_DOCUMENT_TOKEN_TO_BE_REPLACED
Return to the top of the page