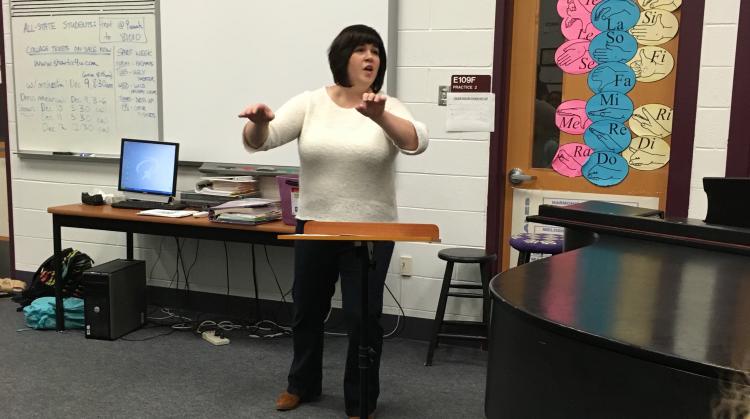 To most people in the United States, the concept of clean and healthy water is a given. A right, not a privilege. But for the past several years, the community that came to embody the decline of the auto industry has had a heartbreaking new distinction: it’s the center of a catastrophic and manmade water crisis.

Improperly treated water from the nearby Flint River has corroded the pipes carrying water to Flint, Michigan, leading to a public health disaster as lead and other toxic chemicals contaminate the area’s main water source. With government action on the issue stalled, residents have been left with few options. But composer and Associate Director of Choirs Andrea Ramsey says they are not without hope.

“When I asked the students what was good about their city, they responded with hope and pride, sharing about the beauty of their neighborhoods and the kindness of the people living there,” she says. “Yet, they also didn’t mince words when asked about the water crisis.”

Ramsey became more closely acquainted with the crisis last year as she worked on a piece commissioned by Chorus America. The organization called on her to donate a choral work as part of a fundraising project that allows choirs to join a commissioning consortium by paying a small fee. In exchange, each choir has their organizational name noted on the printed score and the opportunity to premiere the work in their own communities. The money raised goes directly to benefit the work of Chorus America.

A graduate of Michigan State University, Ramsey wanted to use the spotlight to draw attention to a crisis that had been on her radar for years.

“I lived in Michigan for three years and the crisis began shortly after I moved from East Lansing. I watched it unfold and kept up as best I could with everything going on. It was horrific,” she says. “People have been living without drinkable water in their homes since April 2014.

“One day, the lightbulb just went off. It hit me that this piece would go out to 24 choirs in the U.S. and Canada—many of them in affluent areas. I realized that several of these communities might not even know about the situation in Flint. This was a chance to raise awareness.”

But it had to count. She started working her contacts, reaching out to colleagues in the Flint area, wanting to tap into the emotion of the residents there instead of just rehashing the news stories everyone’s heard and begun to ignore.

“It was terrifying at first,” Ramsey remembers. “I was fortunate to know some people in Michigan who helped me gather information and vet things as we went along. I wanted it to be honest, but I wanted mostly to provide the city with exposure and to open the eyes of others to this massive, ongoing tragedy.”

In the midst of striking that balance, Ramsey came across a poem by 19th-century English poet Christina Rossetti titled “Flint.” She says it fit the bill perfectly.

“It’s essentially about the power in the ordinary—in this case, the very literal power found within a piece of flint. While a flint stone doesn’t have the beauty and glory of a gemstone, it does have the power to create a spark. The poem ends with the line, ‘But a flint holds fire.’”

To fill in the gaps, she looked to Michigan students within Flint and Flint Township. Soliciting written responses from them with the help of Dr. Karen Salvador at the University of Michigan-Flint, she fleshed out their stories and experiences into a piece for piano and treble chorus—both sung and spoken—that seeks to tell the stories that may have been lost in the two years since the crisis began.

“You can hear water in the piano, beginning with what feels like dripping water, ramping up in some places, feeling dirty or murky in others,” she explains. “In the first portion, the voices tell the story with the section of the poem that concludes with the line ‘a flint lies in the mud’ and the gravitas of the music is infused with student’s personal experiences: the acknowledgment that there is no cure for lead poisoning and the challenges of daily living since the crisis began.

“In the final portion, the music becomes more hopeful, with children’s observations about the beauty of their town and the strength of their citizens. Still, as the piece comes to a close, I switch the mood, leaving the audience with three low angst-filled chords and an unresolved, unsettled feeling—because this isn’t over.”

With potentially large and captive audiences, Ramsey added one final touch to the piece.

“We provided the choirs with a QR code that they could add to their concert programs that will link people to information on how to donate to the Flint Rising project. I’ve heard from several choirs already who used this option, and the Cincinnati Children’s Choir  even posted the donation link to Facebook with the video of their performance."

“But a Flint Holds Fire” is the composer’s first foray into musical activism. But she suspects it won’t be her last.

“I have written pieces as memorials before, but never really activism. An issue has to resonate with me, and this one has just grabbed me. People should have clean water. This is an active, ongoing humanitarian crisis, and nothing has been done. The media attention has waned, but we can’t abandon this community.

“I hope the impact is great and encourages many people to donate, but time will tell. For now, it feels like one of the most meaningful things I’ve been able to do as a composer.”

Ramsey travels to Flint in fall 2017 for a choral festival and residence, when she says the piece will be performed in the city for which it was written. For more information on the Chorus America fundraiser, visit the organization’s website.

For information on how to donate to victims of the Flint water crisis, visit the Flint Rising website.

It was a busy fall for the American Music Research Center (AMRC)! One of the... END_OF_DOCUMENT_TOKEN_TO_BE_REPLACED

Friends, My heart is heavy. Associate Professor of Violin Charles (Chas) Wetherbee passed away on... END_OF_DOCUMENT_TOKEN_TO_BE_REPLACED

Longtime Associate Professor of Saxophone Tom Myer retired in May. As the year draws to a close, enjoy his insightful career reflections and advice … and discover what he’s up to now! END_OF_DOCUMENT_TOKEN_TO_BE_REPLACED
Return to the top of the page