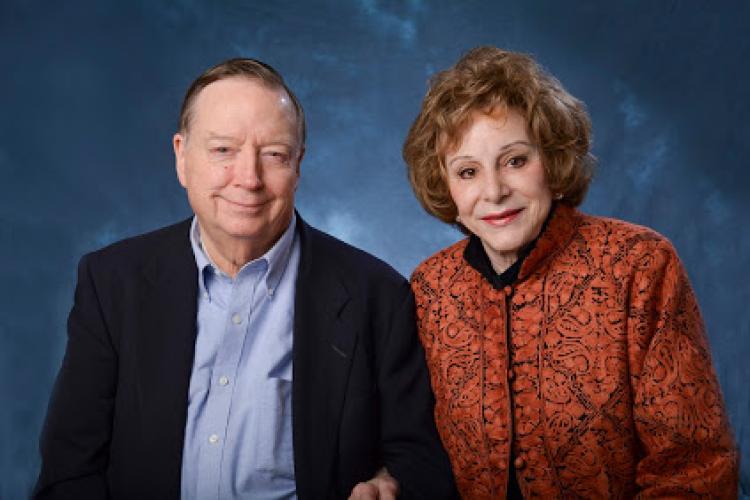 Choral studies have a rich history at the University of Colorado Boulder. The names of Lynn Whitten, Charles Byers, Warner Imig and Walter “Wally” Collins are synonymous with the study of choral conducting and repertoire.

Now one of the pioneers of choral studies at the College of Music is making a trailblazing gift that will ensure that generations of students will have the opportunity to master and carry on both one of the newest and oldest forms of music.

Joan Catoni Conlon and her husband Frank recently endowed the Joan Catoni Conlon Graduate Choral Fellowship. The fellowship provides support to graduate students pursuing the Master of Music or Doctor of Musical Arts in Choral Conducting and Literature degrees. The award is especially intended for students with a demonstrated interest in conducting a wide chronology of choral music from the Renaissance period through contemporary music.

“My husband and I are excited to be able to help future students attend CU and take advantage of the many benefits of studying there,” Joan Conlon says.

Conlon was director of graduate choral research at the college from 1995-2009. Since then, she and her husband have been living in Seattle, but she’s traveled back to Boulder several times to teach the choral conducting symposium.

She holds her time at the college in high regard. “It’s a remarkable place with an enormous reputation as a collection of scholars and performers.

“What I enjoyed most was working with eager, bright students,” Conlon continues. “I also was grateful for support I found for my own publications, a book I authored on Monteverdi and a collection of essays about women choral conductors that I commissioned, contributed to and edited.”

The idea for the fellowship came about when David Kates, a 2007 DMA grad, approached the Conlons.

“I was aware that several scholarships and stipends bore the names of CU choral faculty who were legends in the field,” Kates says. “Dr. Conlon has a similar reputation, and I knew that my fellow alumni and many members of the Boulder community would be eager to support a fellowship in her honor.”

He says he wanted to continue the legacy of the educator who helped shape his musical career. “Dr. Conlon remains one the most influential teachers in my musical life. She helped me to understand structural and aesthetic qualities in music I already treasured, and she introduced me to so much new literature that I’m still digesting what she taught me a decade later.”

For Frank Conlon, Professor Emeritus of History, South Asian Studies and Comparative Religion at the University of Washington, the gift signifies both the importance of music in the couple’s lives and the legacy of his wife’s time in Boulder.

“Choral music has been important for me since grade school. I met Joan through the Northwest Chamber Chorus when she became director in 1971,” he recalls.

“When I retired, my sister-in-law and brother-in-law established an endowed scholarship in South Asian studies in my name. It will be wonderful to be associated with the program as it continues.”

That the Conlon name will be tied to choral studies at CU Boulder is significant because of the indelible mark Joan Catoni Conlon has already left on students and colleagues. Gregory Gentry, Director of Choral Studies and newly named Lynn Whitten Choral Music Faculty Fellow, says Conlon has always been a mentor, a friend and a guide.

“Dr. Conlon has remarkable historical knowledge paired with eternal optimism,” Gentry says. “She’s a magnificent pedagogue and a wonderful embodiment of humanity at its best.

“This fellowship will allow us to seek out future students who have the promise of being great choral leaders like Joan.”

Conlon says part of what excites her about the future of the program is the expertise and passion of Gentry and Associate Director of Choral Studies Andrea Ramsey.

“Greg’s valuable choral leadership at CU is wide ranging and multifaceted. And I’m intrigued by the music Andrea Ramsey composes,” she says. “She uses some compositional techniques from the past, but is attuned to today’s world. I have great respect for her work.”

The attention paid to not just learning choral music but also knowing the historical context in which it was written is what Conlon says sets the College of Music’s program apart. Indeed, CU Boulder’s was one of the first music programs to offer a DMA in Choral Conducting and Literature.

“What always impressed me about Joan and her choral colleagues,” says Frank Conlon, “is that they bring a historical background to the music they perform, and that makes them better able to convey artistic nuance and aesthetic excitement in the music.”

Gentry says the choral studies program will continue that tradition—while making sure choral music remains an outlet for anyone to experience the arts for themselves.

“I think that choral music in particular offers our entire student body, not just music majors, an opportunity to experience the best of men and women, where so much of what we hear or read about in the news is the worst of humanity. We need the arts to balance that.”

The importance of music also extends beyond the choir room.

“We’ve heard a great deal about how students should only study subjects that will get them a good job in science or technology,” says Frank Conlon. “But some of the most excited students who sang with Joan were graduate students in physics or computer science who were more well-rounded individuals because of this affection for choral music. It made them whole people.”

If you would like to support the Joan Catoni Conlon Graduate Choral Fellowship, contact Courtney Rowe, Assistant Director of Development for Music, Arts and Culture at 303-492-1749 or courtney.rowe@colorado.edu.

Olivia Huizar Conner shares how her background inspires her to promote Diversity, Equity and Inclusion (DEI) in music. END_OF_DOCUMENT_TOKEN_TO_BE_REPLACED

Alumna Annie Booth shares how the College of Music continues to impact her career as an award-winning jazz pianist, band leader, composer/arranger and educator—and offers valuable career advice. END_OF_DOCUMENT_TOKEN_TO_BE_REPLACED
Return to the top of the page