Graduates make a connection in the City of Angels 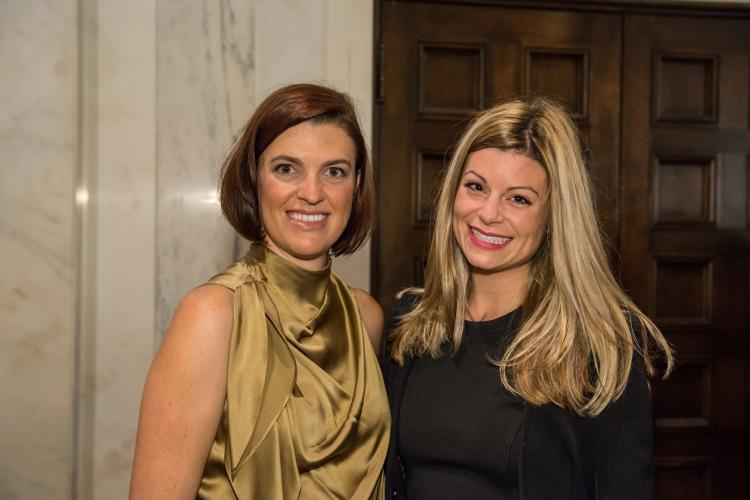 Lacey Huszcza and Isabel DeBoel are College of Music horn performance graduates working as advocates for the arts in Los Angeles.

Sometimes the best way to channel a passion for music isn’t necessarily on the stage.

When horn player Isabel DeBoel graduated with her BM in 2011, that much was clear.

“Right around the time I graduated, the Philadelphia Orchestra filed for bankruptcy,” says DeBoel. “A lot of orchestras were struggling and I was really affected by that.”

Encouraged by horn professor Michael Thornton, DeBoel looked for work in arts administration, advocating for the performers and the art form that she loved and allowing her love of music to manifest itself in her career—despite her decision not to perform herself.

“I wanted to see what I could do for orchestras that were in trouble,” she says.

Thornton helped DeBoel secure an internship at the Colorado Symphony. From there, DeBoel moved to southern California and took a job with the Los Angeles Ballet.

It was a similar journey for Lacey Huszcza.

After graduating in 2003 with a BA in horn performance and a degree in communications, Huszcza also she knew wasn’t destined for a career as a performer.

“Even though I was afraid I’d disappoint him, Professor Thornton was instrumental in encouraging me to pursue a career in arts advocacy and administration,” Huszcza says.

She interned at the Arvada Center in special events fundraising and was hooked. Shortly after that, Huszcza left for LA.

Fast forward to 2016. Huszcza is now in her eighth different position at the Los Angeles Chamber Orchestra, in charge of all income generation for the organization as the Senior Director of Advancement and Strategic Engagements.

Eager to work with an orchestra, DeBoel this year applied for a position at LACO in Huszcza’s department. When Huszcza saw her alma mater on DeBoel’s resume, she knew she’d be a great fit.

“We had gone through the same program with Professor Thornton, so I knew that Isabel would have a real understanding of what an orchestra needs and how to balance that artistic passion with the business side of raising money,” Huszcza explains.

It was the kind of serendipity that gives strength to the theory that in job hunting, it’s all who you know.

“As a student I used to see Lacey’s name everywhere,” says DeBoel. “I used to play sheet music with her name written on the top.

“When I saw she worked at LACO, I actually had a message drafted to her on LinkedIn. But she reached out to me first.”

Now LACO’s newest Advancement and Prospect Research Associate, DeBoel says this isn’t the first time the alumni network has made the difference in her career. “It’s a wonderful thing to make that connection,” she says. “If you’re in a new city and you find people who went to your school, it gives you a sense of home.”

Huszcza, too, knows what an important resource an alumni network can be. She and her husband Daniel Stott—who also graduated from the College of Music—moved to LA in part because they knew other CU grads who had been successful there.

“We knew we would never be totally alone in LA. Keeping in touch with everybody you can is always good because you never know where that connection might lead.”

Huszcza says though she and DeBoel aren’t performing professionally, their passion for music still guides them in their careers—something other music graduates must keep in mind.

“There are many paths you can take that will keep you deeply connected to the music that you love, even if performing in an orchestra isn’t the one for you.”

“Just go for it,” DeBoel adds. “And remember that other alumni and faculty are there to help. There’s always a safety net.”

Collaborative pianist Susan Olenwine works together for the College of Music as a member of the alumni council and advisory board. END_OF_DOCUMENT_TOKEN_TO_BE_REPLACED

Board leaders are spearheading financial support for this college priority. END_OF_DOCUMENT_TOKEN_TO_BE_REPLACED
Return to the top of the page