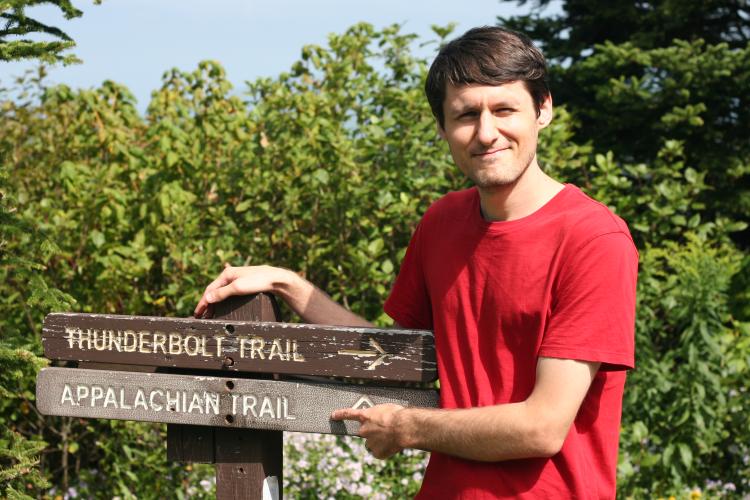 2011 Master's of Music in Composition graduate Keane Southard is planning to hike the Appalachian Trail and write a symphony about the expedition.

Anyone living in Boulder, in the shadow of the Flatirons, could understand the allure of taking your work into the mountains.

Keane Southard has a hunch that the wind blowing through the trees, the sound of critters and the very contour of the earth will set a unique scene as he writes his first symphony.

“I’m not going to bring an iPod or any music with me. I want to listen for the natural sounds and think about how they might be reflected in my music.”

The 2011 composition master's graduate has his compass set on the Appalachian Trail, the 2,000-mile path through the mountains of the eastern United States. He’s currently raising money to hike a five-state stretch of the trail through his home region of New England—and write a large-scale orchestral work inspired by the expedition.

“I’ve kind of been all over the place since getting my master’s in Boulder,” says Southard. “But I’m originally from Massachusetts, so this is a way to reconnect with my home.”

Always an avid traveler and camper, Southard has done a couple of overnight hikes on the trail, and he camped throughout New England as a child. This summer, he intends to spend more than two months trekking the northernmost leg of the trail—through Maine, Vermont, New Hampshire, Massachusetts and Connecticut.

While composition always carries with it a list of expenses, this particular piece—and the journey to make it a reality—presents even more cost challenges. That’s why Southard is asking for help on crowdfunding site IndieGoGo.

“I have to set aside the time to do the hike and compose the symphony … about nine months total,” Southard explains. “But there are also supplies and hiking gear to take into account.”

He’s hoping to raise $10,000 to commission the symphony fund the hike, in addition to help from a couple of grants and backing from the regional orchestras that will eventually perform the piece.

"For the arts entrepreneur, opportunities to support our work are often found outside the art itself—in Keane's case, with his interest in nature and conservation. By connecting his project with orchestras in the vicinity of the Appalachian Trail, Keane has created value for a major work he could not have otherwise undertaken."

As for composing a symphony away from a computer, a piano or any other kind of instrument, Southard has a plan for recording his observations and thoughts.

“All I’m taking is a little notebook with staff paper, which will serve as my journal and my place to jot down any musical ideas that come to me. Most of the composing will take place after I get back.”

And as for what those ideas might be? Southard has tried to keep the pre-hike brainstorming to a minimum.

“I really don’t know what’s going to happen musically,” he says. “I have some general ideas—writing one movement for each of the five states, or determining the length of each movement by the mileage of the trail in each state. But I really want to listen to the soundscapes around me and have the music arise out of my experiences during the hike.”

While Southard has traveled for his work before—he spent a year in Brazil on a Fulbright scholarship in 2013—he says he’s never written a “destination composition” like this before.

“I wrote a piece called ‘A Year in Brazil’ after I got back inspired by all the amazing flute players I met there,” he says.

He’s known the gravity of this project—what it could mean for his career and his personal goals, what a symphony about the trail could do for tourism and conservation in the region—since he first got the idea.

“It’s a realization of two dreams of mine: to hike the trail and to compose a symphony. But as a young composer, it could also provide a lot of visibility for me in my career.

“More than anything, I hope it’s something people are intrigued by. I hope it inspires them to go out and experience and care for this amazing nature that’s right in their backyard.”

If you’d like to help make the Appalachian Trail Symphony a reality, visit Southard’s IndieGoGo page before May 21 to make a donation. In recognition of your support, you could receive a recording of the work, your name in the score and even a signed copy of the score.

It was a busy fall for the American Music Research Center (AMRC)! One of the... END_OF_DOCUMENT_TOKEN_TO_BE_REPLACED

Friends, My heart is heavy. Associate Professor of Violin Charles (Chas) Wetherbee passed away on... END_OF_DOCUMENT_TOKEN_TO_BE_REPLACED

Longtime Associate Professor of Saxophone Tom Myer retired in May. As the year draws to a close, enjoy his insightful career reflections and advice … and discover what he’s up to now! END_OF_DOCUMENT_TOKEN_TO_BE_REPLACED
Return to the top of the page