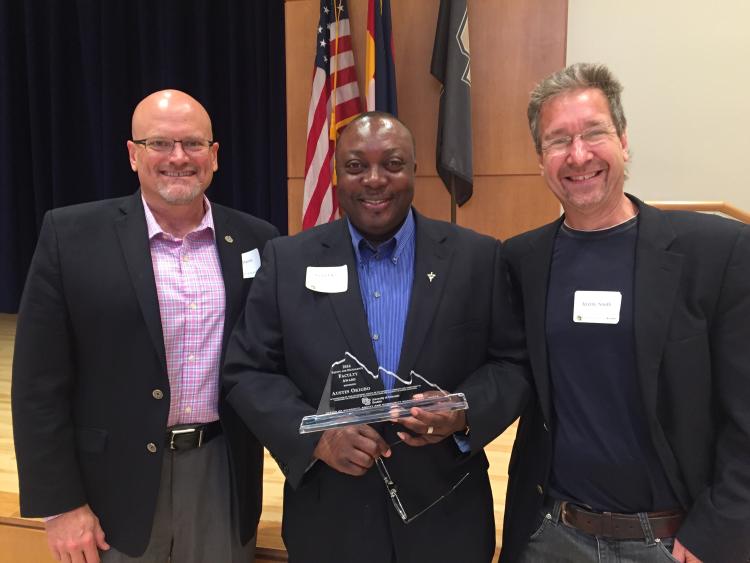 The College of Music’s promotion of diversity and inclusion has been recognized by the University of Colorado Boulder for the third year in a row.

At an April 14 ceremony, Assistant Professor of Ethnomusicology Austin Okigbo was awarded the Equity and Excellence Faculty Award by the Office of Diversity, Equity and Community Engagement.

The award was established to call attention to faculty, staff and students on the Boulder campus who promote inclusion and diversity in their work.

Okigbo says he was surprised to be selected for the honor because he was never doing the work he was doing with the goal of being rewarded.

“I wasn’t doing it hoping someone was noticing. I was doing it because it was the right thing to do.”

The native of Nigeria serves on the College of Music’s diversity taskforce and the study abroad and curriculum committees for the college and the university in the Office of International Education. He says that in all he does, he tries to bring inclusivity into the discussion. “I try to offer ideas in ways I feel I can promote diversity.”

Okigbo is also involved with the Diverse Musicians’ Alliance and serves as the faculty advisor for the African Students’ Association on campus. The group brings speakers to CU-Boulder to address issues related to the African continent and its relationship with the United States.

“We’re giving those students a sense of purpose and belonging,” he says. “They will feel more confident in this environment because they can see their culture being appreciated. And the American students can interact with them by doing something that has cultural meaning.”

In this regard, he says the College of Music has a lot to offer the community.

“Music can provide students a chance to gain cultural competency,” he explains. “That’s something you don’t get in other types of classes.

“Because of the diversity of cultural perspectives we cover in music, it exposes our students in a way that’s more concrete and practical, rather than merely intellectual.”

Okigbo says the college has some work to do, but the foundation is being laid, especially as work begins on implementing the priorities of the strategic plan. “One thing we’ve been talking about—and I’ve been making it a point to address—is diversity of curriculum. We want to make sure our students take classes not just to fulfill requirements, but because they can recognize them as having value beyond that.”

With summer approaching, Okigbo is planning to take a trip to Africa to consult with South African vocal group Ladysmith Black Mambazo as they build a camp to teach their style of music to young musicians.

Okigbo knows the founder of the world-famous ensemble, Joseph Shabalala, and his World Vocal Ensemble opened for the group in March 2014 at the Boulder Theater. He says the group has a lot it can bring to the table in promoting musical diversity.

“My hope is that it will be a wonderful opportunity,” Okigbo says. “They want to give back to young people beyond just performing. They want my opinion as an ethnomusicologist in regard to what this could do for world music studies.”

Eventually, Okigbo says this could lead to a seminar course for CU students to learn from Ladysmith Black Mambazo.

Collaborative pianist Susan Olenwine works together for the College of Music as a member of the alumni council and advisory board. END_OF_DOCUMENT_TOKEN_TO_BE_REPLACED

Board leaders are spearheading financial support for this college priority. END_OF_DOCUMENT_TOKEN_TO_BE_REPLACED
Return to the top of the page