Blurring the lines in art and music 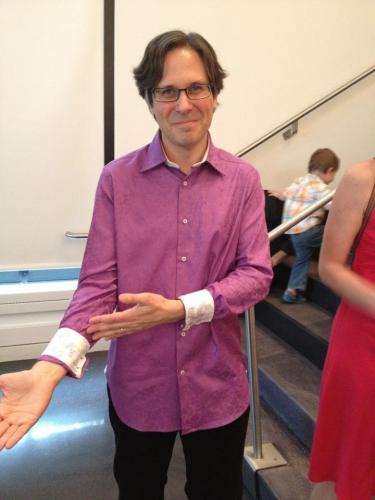 Associate Professor of Music Composition and Technology Michael Theodore was passionate about music from a young age. But from an even earlier age, he'd been making art with his mother.

“I grew up in a very creative household. My mother was an artist and an art teacher in the New York City Public Schools. She was my teacher, too.

“We were always putting things together.”

And as a composer and multimedia artist, putting things together has remained his passion. Theodore recently wrapped up an art and sound installation at David B. Smith Gallery in Denver’s Lower Downtown district.

“It was a month of 15-hour days, driving down to Denver to set up the pieces and driving back here to teach.”

The project was made possible by Theodore’s dedication to his interdisciplinary craft—and by a grant that allowed him to explore new approaches to "spatial computing," a technique that has been pioneered by Nikolaus Correll of the Computer Science department, one of Theodore's collaborators.

Theodore and ATLAS PhD candidate Abhishek Narula were one of 11 teams to receive a grant from the CU-Boulder Entrepreneurship Initiative earlier this year. The seed funding is allowing him to streamline the complicated technology of his art installations by collaborating with Narula on the invention of a new hardware and software platform. 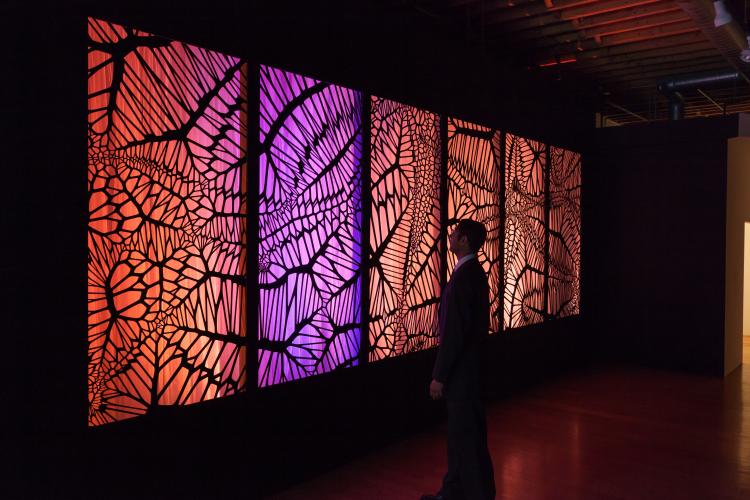 In a nutshell, the circuit boards cut back the amount of cable needed to power and control the installation from 3,000 feet to 30 feet.

“It’s radically changed the scope of what’s possible and practical. So the grant is allowing me to expand the scale and complexity of each show that I produce.”

Inspired by natural phenomena, each of Theodore’s installations has a different theme. All of them have some form and movement, and make use of sound and light to respond to the environment around them.

“An example would be a project at the Boulder Museum of Contemporary Art last year that addressed the floor,” Theodore explains. “It had an old, historic floor that was about to be ripped up and replaced. My installation, through motion and objects sweeping across the wooden floor, made a sound from that floor.

“I wanted people to listen to the unique properties of the wood before it went away.”

Theodore says the role space plays in creating the character of the installation is key.

“My first large installation, and one of the best spaces I’ve presented in, was at the CU Art Museum. It’s a fantastic space and an amazing museum with incredible staff who can help you build anything.”

In his role as professor, Theodore is always conscious of the interdisciplinary nature of the arts.

He teaches in the College of Music and at the ATLAS Institute’s Center for Media, Arts and Performance (CMAP) and considers it his duty to foster connections between music and other forms of art and media on campus.

“In some way, my trajectory in music has been all about that,” he says. “When you collaborate with an artist from another medium, that person brings a different perspective to the table that could provoke something creatively that you wouldn’t have thought of on your own.”

Theodore has facilitated many collaborations in the ATLAS Black Box Theater, and he hopes that these cross-campus projects will continue to expand.

“College of Music students have been working together with fine arts, dance, theater and film for years, but we’re always keeping an eye out for ways to coordinate with other units on campus, specifically those focused on technology,” he says.

Being able to facilitate such a marriage for his students would bring Theodore’s artistic career full circle.

“When I was able to integrate technology, art and movement back into music, that was the biggest ‘A-ha’ moment for me,” he says. “That’s how I can have my creative cake and eat it too.”

Theodore is already preparing for his next installation in late August. He'll bring a brand new, 3,000-square-foot project to the Galleries of Contemporary Art on the Colorado Springs campus of the University of Colorado.

It was a busy fall for the American Music Research Center (AMRC)! One of the... END_OF_DOCUMENT_TOKEN_TO_BE_REPLACED

Friends, My heart is heavy. Associate Professor of Violin Charles (Chas) Wetherbee passed away on... END_OF_DOCUMENT_TOKEN_TO_BE_REPLACED

Longtime Associate Professor of Saxophone Tom Myer retired in May. As the year draws to a close, enjoy his insightful career reflections and advice … and discover what he’s up to now! END_OF_DOCUMENT_TOKEN_TO_BE_REPLACED
Return to the top of the page