A different way to make music 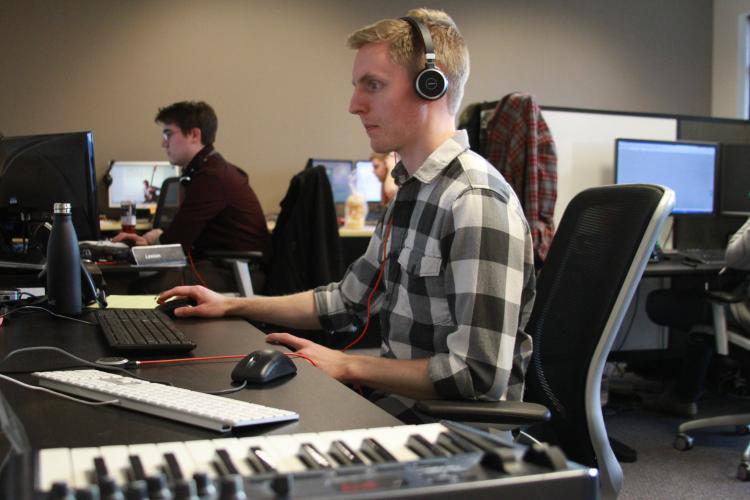 College of Music graduate Malcolm McLean works at his desk in the customer success department at music software company MakeMusic.

A music degree can lead you to any number of different careers.

You could even wind up working at a software company.

“A background in music is a requirement. You have to know or play an instrument to work here. They weren’t concerned that I didn’t know computers when I started.”

Stephanie Doctor is one of a half dozen College of Music graduates working at Boulder-based MakeMusic, a software company known well in the music world. As the team behind Finale, SmartMusic, Garritan and MusicXML, MakeMusic makes products that provide help with music notation and practice.

And this music-savvy group of CU-Boulder alumni provides help with the products.

Doctor, a 2014 saxophone performance and pedagogy MM graduate, works in the customer success department. She spends her days walking music teachers through SmartMusic, a program that trains young musicians on a vast catalog of practice repertoire.

“We take customer questions and help out with technical issues and problem solving. Then we pass bugs along to the developers to fix them,” Doctor says.

“We need to have a vast understanding of music. We’re helping the church organist down the street, but we’re also helping really advanced music engravers,” she explains. “And people are always really impressed when we talk to them. I don’t think they expect to speak to a musician at a software company.” 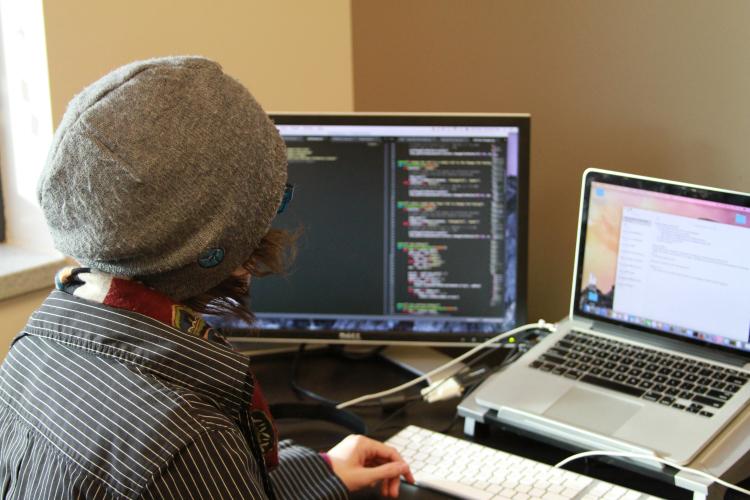 The importance of a music background at MakeMusic comes into play for Jess Garrett as well. The 2013 composition BM grad tests automation on music notation software Finale.

It’s a program she knew like the back of her hand before she even came to the College of Music.

“Long before I began studying composition, working at Finale was a bucket-list job,” says Garrett, who minored in computer science at CU-Boulder. “My interest was always in music and software.”

Garrett used Finale for several years, learning the ins and outs that made her a better composer—and would one day give her the tools to secure a job at MakeMusic.

“Notating music is really complex,” she says. “You have to know what’s going wrong with the app and have an expectation of how things are supposed to work.

“If you don’t, you won’t be effective at testing and improving the product.”

Other members of the team, like Michelle Jones (BM Bassoon/BME ’12) and Malcolm McLean (BM Horn ‘12), say their broad range of experiences at the College of Music set them up for success at MakeMusic after their career paths took different turns.

Jones, an Education Account Manager, taught music for two years in the Douglas County School District before making a change. “Deciding being a teacher wasn’t for me was kind of scary,” she says. “But I’m glad I took the risk and looked for something that was a better fit.” 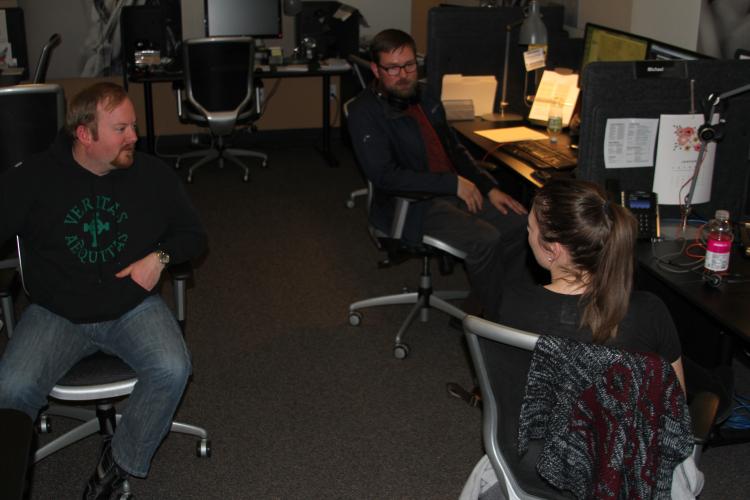 MakeMusic employees hold an impromptu meeting in their Boulder office.

And now, she says, it’s the best of both worlds. She’s still in the music education field, helping teachers.

“I work with music educators and assist them with implementing SmartMusic into their curriculum.”

McLean says his experience with the CU Symphony Orchestra and Pendulum New Music helped prepare him for his post-graduation career as freelance musician. “Thanks to the guidance of [horn professor] Michael Thornton and [orchestra director] Gary Lewis, I was ready to step into fill-in positions at the Colorado Symphony and the Greeley Philharmonic.”

He says as much as he loves performing, music playing is not for everyone. His position in Customer Success at MakeMusic allows him to leverage his passion for music and stretch his legs in different areas.

“I’ve always had broad interests,” he says. “At this job, I get to talk to musicians and performers, along with composers. We all speak the same language.”

As these musicians expand their technological skills—while continuing to play music on their own time—they’re reminded every day of the value of their music pedigree.

“People will look at those skills and see that you know how to use Finale, or you know how to collaborate with other people. Those are things you should have on your resume,” says Jones.

And you should think outside the box.

“Don’t be afraid to fail,” says Garrett. “Go out there and pursue what you love. If you decide you don’t like it, it’s OK. Your past and your interests are what make you stand out.”

For more information about the MakeMusic team, visit its website.

It was a busy fall for the American Music Research Center (AMRC)! One of the... END_OF_DOCUMENT_TOKEN_TO_BE_REPLACED

Friends, My heart is heavy. Associate Professor of Violin Charles (Chas) Wetherbee passed away on... END_OF_DOCUMENT_TOKEN_TO_BE_REPLACED

Longtime Associate Professor of Saxophone Tom Myer retired in May. As the year draws to a close, enjoy his insightful career reflections and advice … and discover what he’s up to now! END_OF_DOCUMENT_TOKEN_TO_BE_REPLACED
Return to the top of the page