Principles of gaming give music students a one-up 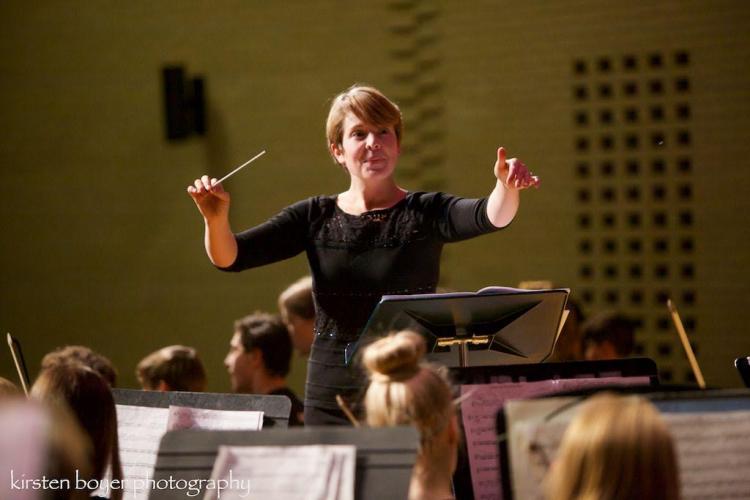 BVSD orchestra teacher and College of Music alumna Ashley Brandin is bringing the principles of gaming into her classroom.

Imagine if music class were a video game.

Learning scales would earn students points. Mastering a particularly difficult piece would be the equivalent of the big-bad “boss” they’d have to defeat to move on to the next level.

And most importantly—they’d be having the time of their lives learning music.

That’s the idea that guides 2013 MME grad Ashley Brandin in her music classroom at Platt Middle School in Boulder every day.

“Games are a great environment because they promote experimentation, learning from your mistakes and choosing your own path,” Brandin says.

But the lifelong gamer and music teacher doesn’t literally bring gaming into the classroom. “I take structural elements that keep kids motivated or engaged and find ways to incorporate that into my teaching.”

Those elements—extra tasks or goals outside your everyday playing—are not required. As a video game player and music student, you’re motivated by points, badges, power-ups and other intrinsic motivators to go beyond what’s being asked of you.

Brandin says that’s what makes them so fun.

“Having it be optional is incredibly important, because in games, you always have the choice to not play. No one’s making you.”

Brandin’s theory is catching on among educators and gamers alike. In January, she presented her research on incorporating the principles of gaming into teaching at Penny Arcade Expo (PAX) South, a huge convention on gaming held in San Antonio that is becoming increasingly academic.

Brandin says while some subjects in school lend themselves easily to the concept, music is a unique case.

“We have a structure to the way our class unfolds. Usually it’s rehearsal, and there’s not really a way to change that. And often kids don’t want that to change because it’s already different from the rest of their classes.”

That’s why Brandin says it’s important for music teachers to modify the structure of their lesson plans—not the content.

“One of the downfalls about edutainment is that it often asks teachers to change what they’re teaching. But changing the presentation is where we can be more engaging.”

Brandin’s done that in her orchestral music class by creating a series of achievement-oriented challenges for students to undertake on their own time. “They’re divided into four different categories,” she says. “Perfunctory, exhaustive, difficulty and exclusionary.”

These achievements introduce students and video game players to the rules, reassuring them when they’re doing the right thing. “At the beginning of the year, kids can feel like they’re making a lot of mistakes and get embarrassed,” says Brandin. “But if you make mistakes in the beginning you have a better chance of success later on.”

Some examples of perfunctory challenges include telling the class a musical pun or bringing in a music-related drawing for Brandin to place on her door—”anything that breaks the ice and creates a connection and a safe environment for them to learn in,” she explains.

Learning all the major scales or memorizing all of your flashcards are good examples of exhaustive achievements. Brandin says her students will often choose to attempt more challenging exhaustive achievements to push themselves to get to the next level. “You’re presented with choices and opportunities to demonstrate your competence, which motivates you to keep going.”

Achievements based on difficulty are all about students pushing themselves creatively. Notating songs by ear or playing a scale in two octaves are examples. “I had one sixth grader notate ‘The Final Countdown.’ He did a great job and he was the one who chose to do this more difficult song,” Brandin says. “And there are obvious relevant musical skills embedded in that, but he had a fun time doing it as well.”

By their very nature, exclusionary exercises—trying to be the best at something—can be competitive, so to avoid that, Brandin focuses again on creativity when encouraging these projects. “In a game, you can receive a badge for playing a game for a long time—like 12 uninterrupted hours—or on a unique day—like Labor Day. It's unique, but not necessarily difficult,” she explains.

“I had one girl create a superhero identity for Beethoven. Because he was deaf, he could feel tremors in the earth whenever there was danger. He would fly around on his harpsichord jet pack to vanquish his enemies with his violin tomahawk.

“It was so cool because she learned about Beethoven, but she and her peers could also relate to this superhero.”

The common thread in all these achievements is self-selection by students—and no grades. “That way, they feel OK about making a mistake and working their way through it,” says Brandin.

During her time as a master’s student at the College of Music, Brandin says she learned to employ the same experimentation in her research that she encourages in her music class.

“I researched all this stuff about games and education and was so excited about it, and I kept waiting for someone to write about it or give me a manual,” she says. “But I learned that you can’t wait for someone else to do something that excites you. If you’re interested in a specific facet of education, just try it.

“Much like when you’re playing a game, the worst thing that can happen is that you try something innovative and it fails. But there’s always another level—or another period in the day—for you to try again.”

Brandin gives her presentation, “You Have Died of Dysentery: Meaningful Gaming in Education,” next at the East Coast Game Conference in Raleigh, North Carolina, on April 21.

Curiosity drives Lydia Wagenknecht, a PhD candidate in ethnomusicology and recent recipient of a Fulbright Research Award. “I care that my research will help us understand something in a more broad-based way that we didn’t understand before,” she says. END_OF_DOCUMENT_TOKEN_TO_BE_REPLACED

We’re so excited to welcome alumnus Damani Phillips back to campus this week and to present him the College of Music’s 2022 Distinguished Alumnus Award at our commencement ceremony on May 5! “The versatile training provided by CU has been the cornerstone of my success to date, and has enabled me to do and be many things well beyond typical expectations,” he says. Meet Phillips and discover his powerful advice to graduating Music Buffs. END_OF_DOCUMENT_TOKEN_TO_BE_REPLACED

On May 5, we look forward to welcoming back Judith Glyde, formerly professor of cello and chamber music at the College of Music and chair of our string faculty. Since retiring in 2014 to live in New York City, the professor emerita she has been active with the college’s alumni community there, offering tremendous support to Forever Buffs who are now living and working in the city. END_OF_DOCUMENT_TOKEN_TO_BE_REPLACED
Return to the top of the page