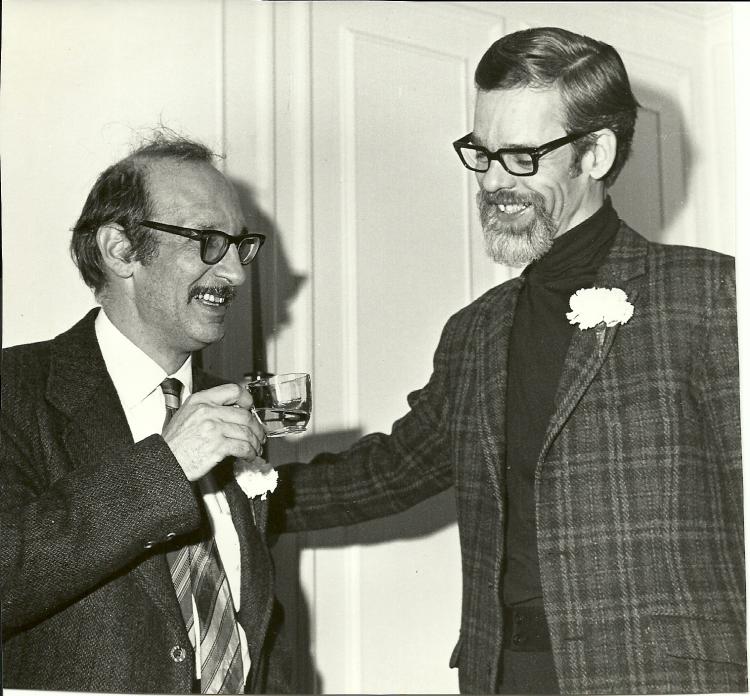 For 14 years, former College of Music piano professor David Burge wrote a column every month for Keyboard Magazine. The late professor wrote about performance, practice technique and the importance of mastering contemporary pieces alongside the classics.

Since 1989, those works of musical expertise have been locked in the magazine’s archives. But with your help, they could soon be made available again for musicians to study and absorb.

Burge’s widow Evon, a College of Music alumna who studied with David when she received her master’s degree in 1969-70, is on a mission to share her husband’s knowledge with the masses.

“These articles should not be left lying in an archive. They have too much to say, too much value that people will appreciate,” Evon says.

With that in mind, she’s compiling those important writings into a book. She’s hoping to fund the publication through a campaign on the crowdfunding website Indiegogo.

The idea began taking shape shortly after David’s death in 2013. Evon had set up a Facebook page and YouTube channel to share photos, videos and pearls of wisdom for those who admired David as a teacher, composer and pianist.

But even among the recordings and compositions, something was missing.

“There were people visiting the page who knew about those articles. They said it was a shame that they were no longer available, because they had so much value for all musicians,” says Evon.

After a while she started looking into the suggestion. “His works had been sent to the archives at New York University, so I contacted them and they began to walk me through the process,” Evon recalls. After Keyboard Magazine cleared the copyright, work could begin on “Timeless Relevance: The Keyboard Magazine Columns.”

Throughout the late 20th century, David Burge brought a unique voice and perspective to the piano performance world. A graduate, longtime professor and department chair at Eastman School of Music, he was a champion of contemporary works, premiering pieces by George Crumb, William Albright and other leaders of American new music.

Evon says he was a force in bringing their work to the mainstream. “Because of him, the attitude that contemporary music is just as important as classical has prevailed among musicians. You’re seeing more performances of today’s music in more venues than would have been possible in the 1950s. And the music David premiered is still being performed today.”

A composer himself, David wrote more than 100 pieces for piano, winds, strings and voice. And as an educator, he was an authority on the music of the day.

“When it became necessary for me to go to university, I knew I wanted to study with David,” says Evon. “I was working as a private piano teacher, and I heard him speak and play and was just entranced.

If you wanted to study contemporary music, he was the only person you went to.”

When Cornell graduate student Tom Darter approached David in 1974 to take on a column in his new magazine geared at keyboardists—then named Contemporary Keyboard—he took the idea and ran with it.

“The columns were received very well by musicians because they had a lot to say about technique and approach. They were also full of wisdom and wit,” Evon says.

The character of the pianist is clear in this excerpt from an article he wrote for Contemporary Music Review in 2002:

I learned, in fact, that the more notoriety I attained the more [fellow pianists] looked upon me as a "specialist" (despite the inclusion on most of my programs of at least one major eighteenth- or nineteenth-century composition), implying that I probably wasn't good enough to do the "real stuff." For my part, I found their desire to emulate Serkin and Horowitz flawed by the fact that they wished to play exactly the same music as they had heard these great pianists perform. Such a total preoccupation with the so-called standard repertoire did not allow them to address the music of their own time at all. Such a circumscribed point of view struck me as self-defeating, so I continued to pursue my exciting minority perspective.

Evon says her husband’s legacy should set an example for musicians of all kinds. “He gave great attention to whatever piece he performed and treated all the music with the same gravitas and honesty.

“His writings should become part of the academic reading for keyboard students,” she adds. “His perspective on different pieces, performance and a musician’s place in the world was extraordinary.”

Evon is hoping to raise $7,000 on Indiegogo to fund the compilation of David Burge’s writings. To help, visit the “Timeless Relevance: The Keyboard Magazine Columns” campaign page and donate before March 17.

Curiosity drives Lydia Wagenknecht, a PhD candidate in ethnomusicology and recent recipient of a Fulbright Research Award. “I care that my research will help us understand something in a more broad-based way that we didn’t understand before,” she says. END_OF_DOCUMENT_TOKEN_TO_BE_REPLACED

We’re so excited to welcome alumnus Damani Phillips back to campus this week and to present him the College of Music’s 2022 Distinguished Alumnus Award at our commencement ceremony on May 5! “The versatile training provided by CU has been the cornerstone of my success to date, and has enabled me to do and be many things well beyond typical expectations,” he says. Meet Phillips and discover his powerful advice to graduating Music Buffs. END_OF_DOCUMENT_TOKEN_TO_BE_REPLACED

On May 5, we look forward to welcoming back Judith Glyde, formerly professor of cello and chamber music at the College of Music and chair of our string faculty. Since retiring in 2014 to live in New York City, the professor emerita she has been active with the college’s alumni community there, offering tremendous support to Forever Buffs who are now living and working in the city. END_OF_DOCUMENT_TOKEN_TO_BE_REPLACED
Return to the top of the page