Want to design your own installation at an art museum? Travel the world changing the lives of young people in developing countries?

In some cases, all you need is a music degree.

Every week, the College of Music’s Entrepreneurship Center for Music hosts the Career Launchpad series, inviting musicians, composers and other arts professionals to share advice about what lies beyond the doors of Imig Music Building. On Wednesday, Feb. 10, the Launchpad welcomes back two College of Music alumni who have run the gamut of gigs in the music world. 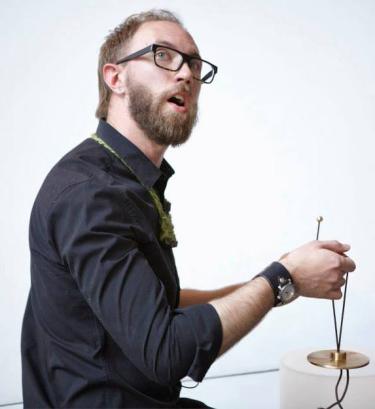 “It’s just been a combination of meeting the right person at the right time and not giving up on ideas,” says Nathan Hall of his diverse resume since graduating with a DMA in composition in 2014.

Hall, who’s originally from Buffalo, New York, spent March 2015 doing something that’s almost unheard of for a composer: He was the first Creative in Residence at the Denver Art Museum.

“I curated several interventions in the galleries, connecting the works on display with music,” Hall says.

Among other things, Hall placed harmonicas in one gallery and invited visitors to play as they viewed pieces depicting the Wild West.

Hall says this and other projects in Denver came about in part thanks to a chance meeting.

“I was in a clothing store where I work part-time, and a customer introduced herself,” he recalls. “She worked for a group that makes use of unusual spaces in Denver as a way to attract new people to the arts.”

They set up a meeting that eventually resulted in Hall’s “Ghost Light” installation at Boettcher Concert Hall. “It was a truly immersive environment,” he explains. “I created an electronic soundscape with speakers throughout the hall. We had the audience lie down on the stage in the dark, and then the sound would come at them from 360 degrees… even vibrating the floor.”

The chorus of ghostly voices attracted 500 people over the course of two weeks in August 2015 and landed Hall his first big newspaper review in The Denver Post.

Both the Boettcher and Denver Art Museum ideas began to percolate in 2014, but Hall had to be patient while the pieces fell in place—a good piece of advice for students.

“You have all these ‘what ifs,’ but until the right circumstances come around you can’t act on them.,” he says.“Those are the ideas you can’t give up on.”

Like Nathan Hall, Kimberly Patterson has been taking opportunities and running with them since earning her DMA in cello performance in 2012. A graduate of the College of Music’s Quartet Program, Patterson played for several years with the Tesla Quartet, winning chamber music awards around the world, and recently wrapped up a year-and-a-half contract with the Colorado Symphony. 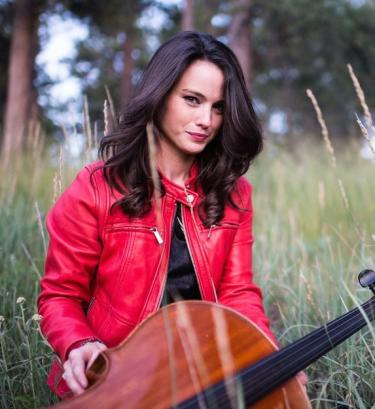 Now, as part of the Patterson/Sutton Duo with 2014 guitar DMA recipient Patrick Sutton, Patterson is continuing her scholarly interest in music—and sharing a love of playing with children overseas. “We presented a lecture recital and paper at the Guitar Foundation of America, and will be again at the International Guitar Research Center in March,” Patterson explains. “And we traveled to Afghanistan last year to teach at the National Institute of Music.”

The duo was in Kabul for a two-week residency, working with young musicians as music makes a slow return to the war-torn country after decades of Taliban rule. This life-changing trip, Patterson says, also happened partially thanks to serendipity.

“I was actually supposed to do another trip with Cultures in Harmony a couple of years ago, but I had to cancel due to a scheduling conflict,” Patterson explains. “Then last year, the organizer called me out of the blue and asked if I wanted to go to Afghanistan.”

Patterson says despite the intimidating prospect, she did her research, consulted friends and took the leap. “It was Patrick who really pushed me to be brave. And then when I got there, I saw what it meant to be truly brave. To walk to school every day with an instrument in your hands, knowing music used to be outlawed—and is still taboo in many cases. It gives you incredible perspective.

“That ended up being one of the defining moments of my career.”

Patterson says she was able to continue working with her students in Afghanistan via Skype even after she returned home, and hopes to travel to another country for similar work soon.

Both Patterson and Hall also released CDs in the last year. They say the biggest piece of advice they hope to impart on students when they come back to Boulder is to be prepared for anything.

“Look at where there’s a need for something that might not have been done before, and see if what you love to do could fit in that opening,” says Hall.

“And documentation is everything,” he adds. “I’ve kicked myself for not having really great video or audio of some of my work—and it’s hard to describe projects that are outside the box.”

Patterson continues, “When you graduate, jobs aren’t necessarily going to line up for you. So having good photos, a website, videos and other recordings is essential. Plus, you need to be well-rounded as a musician. Versatility is what makes a career like this work.”

It was a busy fall for the American Music Research Center (AMRC)! One of the... END_OF_DOCUMENT_TOKEN_TO_BE_REPLACED

Friends, My heart is heavy. Associate Professor of Violin Charles (Chas) Wetherbee passed away on... END_OF_DOCUMENT_TOKEN_TO_BE_REPLACED

Longtime Associate Professor of Saxophone Tom Myer retired in May. As the year draws to a close, enjoy his insightful career reflections and advice … and discover what he’s up to now! END_OF_DOCUMENT_TOKEN_TO_BE_REPLACED
Return to the top of the page