Setting the Bard to music 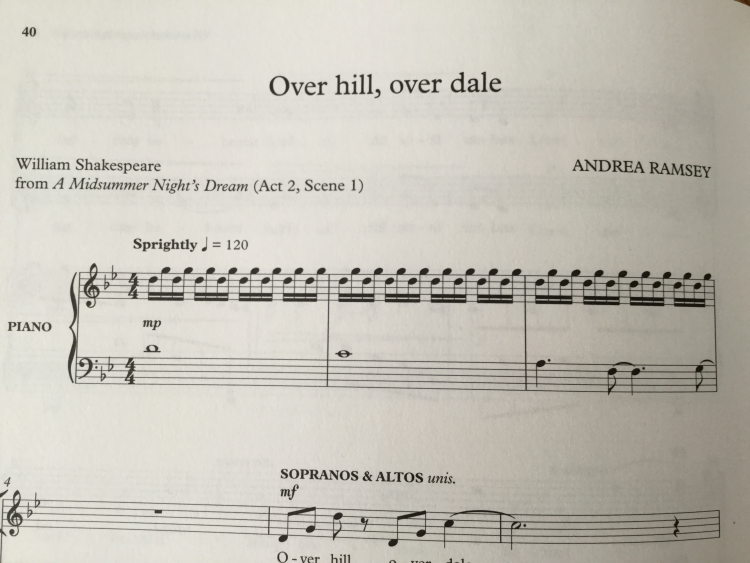 "Over hill, over dale," from "A Midsummer Night's Dream," was set to music for "Hark, Hark, the Lark," by College of Music Associate Director of Choral Studies Andrea Ramsey.

“There’s a timelessness and a depth to Shakespeare,” says Associate Director of Choral Studies Andrea Ramsey. “There’s a lot to dig into. And the form is nice to work with as a musician. There’s a flow to it.”

Now Ramsey and a handful of other composers are part of a new collection of Shakespeare settings, “Hark, Hark, the Lark.” Released in the fall by Oxford University Press, the compilation commemorates the 400th anniversary of Shakespeare’s death.

The collection of eight settings features parts for upper voices, and includes songs inspired by “Hamlet” and “As You Like It” and some of Shakespeare’s most beloved poems. Ramsey’s piece, “Over hill, over dale,” is based on a song sung by the spritely fairy Puck in “A Midsummer Night’s Dream.” In the midst of a light-hearted story about love and mischief, the song is sung as Puck encounters a fairy in the woods who is on an errand for the fairy queen Titania.

“The book has a number of popular Shakespearean texts, but there are also some lesser-known settings that are just beautifully musical,” Ramsey explains. “They chose ‘Over hill, over dale’ because it was both well-known and because it worked well with music.”

While the text was already chosen for her, Ramsey says the musical choices were hers. “I mostly wanted to capture the lightness,” she explains. “The opening is sparkly, as Puck is flying around. It’s dance-like and changes meter throughout.

“There’s a darker section, when the notes are heavier and lower on the piano to denote the strength of the queen’s bodyguard. Then the piece slows slightly as Puck says goodbye.”

Other composers featured in the book include Alan Bullard and Stephen Hatfield. More information is available on the Oxford University Press website.

It was a busy fall for the American Music Research Center (AMRC)! One of the... END_OF_DOCUMENT_TOKEN_TO_BE_REPLACED

Friends, My heart is heavy. Associate Professor of Violin Charles (Chas) Wetherbee passed away on... END_OF_DOCUMENT_TOKEN_TO_BE_REPLACED

Longtime Associate Professor of Saxophone Tom Myer retired in May. As the year draws to a close, enjoy his insightful career reflections and advice … and discover what he’s up to now! END_OF_DOCUMENT_TOKEN_TO_BE_REPLACED
Return to the top of the page