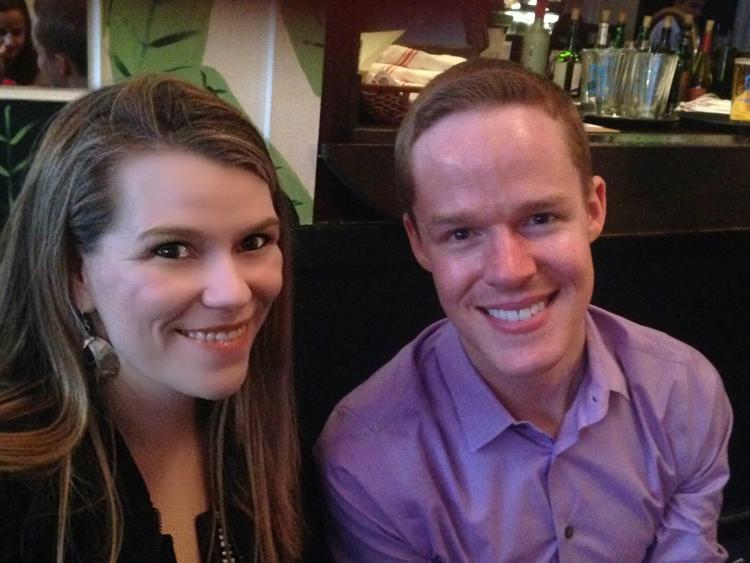 Jessica Kiger (BM '06) and Nathan Brandwein (BM '02) live in New York City and are on the front lines of the effort to make sure opera remains an important part of the cultural conversation.

When College of Music alumni Jessica Kiger (BM ‘06) and Nathan Brandwein (BM ‘02) graduated–with vocal performance and piano performance degrees, respectively–they didn’t picture themselves off stage and behind the scenes. But one grad school job and a nod from a Juilliard professor later, they’re working at one of the premiere opera venues in the world.

Kiger and Brandwein freelance for the Metropolitan Opera’s “Live in HD” broadcasts. Along with a team of videographers, editors, directors and producers, they bring world-class opera to movie theaters around the world. Indeed, they’re on a mission to keep opera fresh and relevant. “The only way the art form survives is if we are entertaining and educating worldwide audiences about what’s going on at the highest level of achievement,” says Brandwein.

Among the few production staffers at “Live in HD” with an extensive background in music, Brandwein and Kiger are integral to each performance. Brandwein is a score consultant for the live broadcasts and audio edit supervisor during post-production. As a production associate, Kiger prepares musical scores for “HD” directors, and works as a script and score reader. “For me, it’s taking the text and making it musical in my head,” says Kiger. “Sometimes you have to go off script, and it’s important for the script reader to be able to follow along, so the associate director knows what’s next.”

Brandwein, who earned a doctorate in collaborative piano at Juilliard, says the success of “Live in HD” – in its 10th season across 70 countries – is due to the talent and dedication of the crew. “It’s a testament to this vision for opera. What you see is the tip of the iceberg in terms of the work that goes into the broadcast. Everybody – production assistants, camera operators, directors – is the best in the world at what they do.”

Meanwhile, in addition to her work with the Met, Kiger is also leading the charge in New York’s new opera scene. In 2012, she became executive director and producer of On Site Opera, which takes opera on the road, performing pieces in locations that give them new context. For example, the critically acclaimed company has produced Giovanni Paisiello’s “The Barber of Seville” in an Upper East Side mansion and Jean-Philippe Rameau’s “Pygmalion” at Madame Tussauds New York. “We’re making a case for intimate, immersive opera. More and more, I think that’s where the art form is going,” she says.

Brandwein continues to teach piano and perform in New York and abroad. He says he owes his education at CU for his success as a pianist ... and at the Met. “I studied a lot of theory, which is important in my career–especially when I’m working with directors at the Met. I can make sure they understand the music and how it’s constructed, and that foundation was laid at CU. I’ll always be grateful for that.”

Kiger says she would never have ended up pursuing this path if it hadn’t been for the support of CU faculty. “My teacher, Maggie Lattimore, told me she would support me and she believed in my talents no matter how I used them. That was really encouraging.”

Kiger’s next project is as a Project Manager with VisionIntoArt, the multimedia production company run by visionary composer Paola Prestini. Kiger continues to evolve with the opera world itself. “It’s been exciting to do a lot of different things, to challenge myself in different ways and see what sticks.”

Read more stories like this in the online edition of Colorado Music magazine.

Curiosity drives Lydia Wagenknecht, a PhD candidate in ethnomusicology and recent recipient of a Fulbright Research Award. “I care that my research will help us understand something in a more broad-based way that we didn’t understand before,” she says. END_OF_DOCUMENT_TOKEN_TO_BE_REPLACED

We’re so excited to welcome alumnus Damani Phillips back to campus this week and to present him the College of Music’s 2022 Distinguished Alumnus Award at our commencement ceremony on May 5! “The versatile training provided by CU has been the cornerstone of my success to date, and has enabled me to do and be many things well beyond typical expectations,” he says. Meet Phillips and discover his powerful advice to graduating Music Buffs. END_OF_DOCUMENT_TOKEN_TO_BE_REPLACED

On May 5, we look forward to welcoming back Judith Glyde, formerly professor of cello and chamber music at the College of Music and chair of our string faculty. Since retiring in 2014 to live in New York City, the professor emerita she has been active with the college’s alumni community there, offering tremendous support to Forever Buffs who are now living and working in the city. END_OF_DOCUMENT_TOKEN_TO_BE_REPLACED
Return to the top of the page