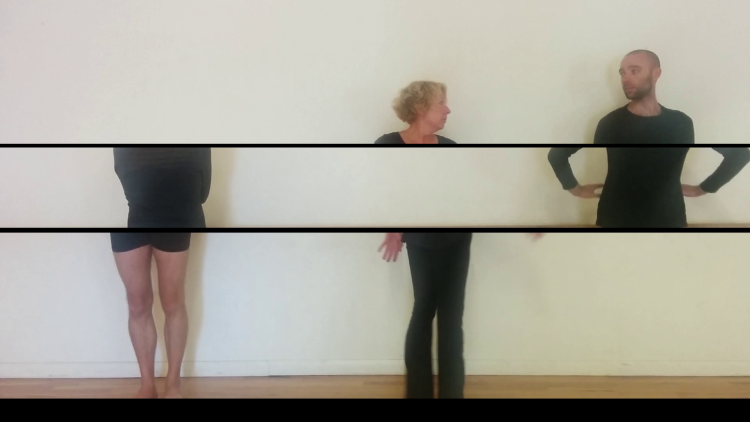 Preview of one of the videos featured in "Frames."

But that’s about to change. With Danelle Helander and Boulder’s Helander Dance Theater, the piano professor is cooking up a revival of last spring’s popular multimedia show, “Frames.”

Even for Korevaar and Helander, it’s hard to describe what audiences will see and hear at the show. “It’s an experience,” says Helander. “Dance and music don’t even encompass it. And we’re adding video into the mix.”

“Frames” was first presented to audiences last spring, billed as a “musical fusion of jazz, classical, art punk and techno pop.” Artistic Director Helander says the program explores different perspectives—those of the audience and the performers—and portrays the many ways music, art, even life are interpreted differently.

“When David and I first started talking about this collaboration, we focused on how interesting it is to see yourself perform. The faces you make—the things you aren’t even aware of. The idea grew from there,” says Helander.

The team has been expanding and perfecting the idea after the show’s spring run at the Broomfield Auditorium and the Dairy Center for the Arts, excited to bring new videos to the show. They say the venue for this iteration—the ATLAS Black Box Theater—allows them to stretch their legs.

“This is the most appropriate venue we’ve been in,” says Helander. “It allows us to add the final piece of the puzzle.”

“They help explain the idea of ‘perspective’ as we’re dealing with it in the music and dance,” says Executive Director Sean Owens. “In one video, we focus on three parts of the body—shoulders, torso and legs—all moving independently of one another.”

“The videos sum up and clarify a lot of what happens in the show up until that point. They’re a recapitulation, which is what we’re doing musically, too,” says Korevaar.

For Korevaar, “Frames” offers a chance to step out of his comfort zone. “The musical component is interesting,” he says. “I’m up there with a bass player and a percussionist. Jazz is their thing. And I’m not a jazz artist.

“We’re doing intentional improvisation, which—outside a short passage in a Mozart piece or such—isn’t something I do very often.”

Helander says a goal of the collaboration is for the performers themselves to explore new sides of their respective arts. “I love collaborating with different kinds of artists,” she says. “It’s been really fun to watch David and the other musicians open up more and more.”

“It’s a completely new experience,” Korevaar adds. “We’re such a diverse group, and the different backgrounds we bring to the stage are really what make this show unique.”

Indeed, each of the performers brings something different to the table: Helander is an elder caregiver, Owens is an attorney. Bassist and musical director Matt Powelson is a cabinet maker, and drummer Mearl Thompson is a tai chi master.

Owens says for him and Helander, working with different kinds of artists keeps them on their toes. “We’ve been working together for about a decade, so we really understand each other and our art. It’s helpful to bring other people in, to make sure what we’re doing makes sense to someone besides us.

“Working with someone like David is really fun because we’re getting him out from behind his instrument and doing something that’s really novel.”

“It’s liberating, and to some extent it’s scary,” says Korevaar. “We’re working as an ensemble in the moment … while the framework is there, it’s different every time.”

Curiosity drives Lydia Wagenknecht, a PhD candidate in ethnomusicology and recent recipient of a Fulbright Research Award. “I care that my research will help us understand something in a more broad-based way that we didn’t understand before,” she says. END_OF_DOCUMENT_TOKEN_TO_BE_REPLACED

We’re so excited to welcome alumnus Damani Phillips back to campus this week and to present him the College of Music’s 2022 Distinguished Alumnus Award at our commencement ceremony on May 5! “The versatile training provided by CU has been the cornerstone of my success to date, and has enabled me to do and be many things well beyond typical expectations,” he says. Meet Phillips and discover his powerful advice to graduating Music Buffs. END_OF_DOCUMENT_TOKEN_TO_BE_REPLACED

On May 5, we look forward to welcoming back Judith Glyde, formerly professor of cello and chamber music at the College of Music and chair of our string faculty. Since retiring in 2014 to live in New York City, the professor emerita she has been active with the college’s alumni community there, offering tremendous support to Forever Buffs who are now living and working in the city. END_OF_DOCUMENT_TOKEN_TO_BE_REPLACED
Return to the top of the page