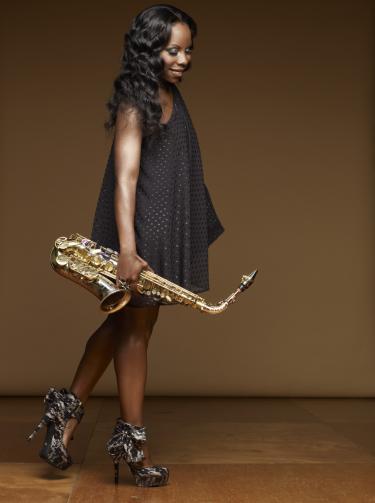 Saxophonist Tia Fuller graduated in 2000 with her master's degree in jazz pedagogy and performance. Since then, she’s recorded albums with her quartet and performed with legends like Patti LaBelle and Rufus Reid. She’s also shared the stage with R&B superstar Beyoncé as her band’s lead saxophonist.

Fuller will be back in Boulder the weekend of Nov. 14, taking part in an open rehearsal on Thursday, a master class on Friday and performing with the Jazz Ensembles on Saturday. The Colorado native will be the first alumna to perform as a guest artist with jazz studies students.

Thompson Jazz Studies Program Director John Gunther hopes that will send a powerful message to students. “By meeting Tia—someone who was in their shoes—they can see themselves in her, and see themselves having that kind of success some day.”

For someone who’s performed at the White House and traveled the world with one of the most recognizable artists in music, Fuller says she’s excited to be back in a place so integral to her story. “I went back to Boulder a couple of years ago for a performance, and it almost felt like another lifetime since I was there,” she says. “It was so long ago, but everything was very much the same. I attended the Mile High Jazz Camp on campus as a kid, so I have a lot of great memories of my foundation in music.”

Not only her foundation, but her vision for her career, began at CU-Boulder. “Byron Stripling came to the college when I was there, and he had us do a vision exercise. We closed our eyes and visualized ourselves walking into Carnegie Hall, or wherever we wanted to play some day,” she remembers. “Then he had us write down all our goals. Ten years later, I remember pulling out that sheet and coming to tears because I had hit 98 percent of my goals.

“It was that experience—which I had at CU—that really showed me the importance of a crystallized vision, of not being afraid to relentlessly pursue your dreams. So I’m excited to be back in the place where that happened for me.”

When she isn’t touring, Fuller keeps a busy schedule as a professor, teaching three days a week at Berklee College of Music in Boston, then jumping on a plane to play concerts in Canada, Atlanta and Wisconsin … to name a few recent trips. And she has an album coming out next year.

She says she first learned to balance her life as a performer and pedagogue during her time in Boulder. “It was during that period that I really got to delve into pedagogy,” Fuller explains. “I was directing one of the jazz ensembles, and while I was new at it, I learned by watching the faculty. CU taught me the art and science of teaching, and it’s been really helpful in developing my career in performance and education.”

Associate Dean for Administration and Jazz Studies Professor John Davis had Fuller as a student when she was in Boulder. He says Fuller, who was the program’s first student to earn the jazz performance and pedagogy master’s degree, was already a talented performer and composer when she arrived in Boulder.

“While a student here, she entered the highly competitive ‘Sisters in Jazz’ competition, sponsored by the International Association for Jazz Education,” Davis recalls. “Needless to say, we were beyond proud when Tia was selected.

“To this day, we point to Tia as an inspiration for students and faculty. We are so proud to call her one of our own!”

Fuller’s visit coincides with the Colorado Conservatory for the Jazz Arts (CCJA) mini-camp on the CU-Boulder campus. “The camp is about supporting young jazz musicians in Colorado,” says Gunther. “So for them to get to see Tia in concert will be really inspiring as well.”

It’ll also be an inspirational trip for Fuller. “If I had any advice for students, it would be to never allow fear to dictate your steps. Moving forward in faith and not fear has been one of my mantras,” she says.

While in Colorado, Fuller will perform at the Nocturne Jazz and Supper Club in Denver at 7 p.m., Friday, Nov. 13, in addition to her work with students at the College of Music.

A new member of the College of Music faculty shares his approach to preparing students to become universal musicians, and fostering an environment of diversity and inclusivity. “It's not about hyper-specialization, but about flexibility, creativity and keeping an open mind,” he says. END_OF_DOCUMENT_TOKEN_TO_BE_REPLACED
Return to the top of the page