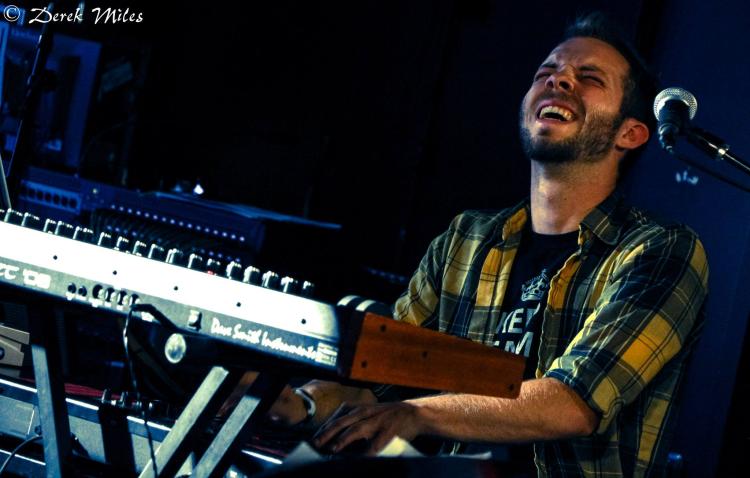 As far as careers go, jazz pianist Stephen Thurston is hitting all the right notes. Since graduating from the College of Music with a bachelor’s degree in jazz piano in 2013, Thurston has been growing roots in the Denver jazz scene, playing an average of one show per day—often two.

“I’m lucky if I have a day off,” says Thurston. “But when you’re a musician, you have to get paid … so the more gigs you have, the better.”

And it helps if you’re versatile. Thurston plays with psychedelic funk band Jalbatross at Quixotes True Blue on Mondays, gigs with Mark Emmons and the B3 Jazz Project at Herb’s on Tuesdays and sits in with musicians during the Hump Day Funk Jam at Herb’s on Wednesdays. He also plays weddings with the Diamond Empire Band and subs for other musicians to fill out his week.

It’s a dream lifestyle for a performer. And Thurston says it all started in Boulder.

Learning the fundamentals of jazz

The first time the Boulder native started studying music, it didn’t take. “We had a piano in the house, and I would play around on my own,” he says. “I started taking classical piano lessons, but I didn’t really like it as much. So I quit.”

He played off and on for a few years, but it wasn’t until high school—when music theory started to enter into his studies—that things clicked. He started taking lessons with CU-Boulder music theory professor and jazz expert Keith Waters. “That’s when my interest in music really started to go somewhere. I started going to Jazz Jam at the Outlook Hotel and I was hooked.”

Thurston says his music theory studies made him a stronger jazz musician. “It helps with improvising. You have the tools you need to play with a person—maybe someone you’ve never met—and know what notes he’s playing and what you can do to accompany him.

“Playing music without knowing theory is like having a conversation without grammar or syntax.”

Yet learning to improvise without first learning your scales could be considered just as problematic. That’s why, when it came time to go to college, the blossoming teen jazz artist—who was playing Miles Davis at 16—decided to give classical piano another try.

“I don’t feel like I learned how to play the instrument correctly until I got to CU,” Thurston admits. He brought his jazz chops to classical piano in his studies with now-retired professor Doris Lehnert. “I did it all backward. When I got here, they said to me, ‘You need to practice your major scales.’”

At the same time, Thurston perfected his jazz skills with his primary teacher—jazz piano faculty Jeff Jenkins—while staying active in the local music scene playing gigs around Boulder. He also earned a Music Technology Certificate, which he says sets him apart. “Most pianists don’t like synthesizers—and if they do, they don’t have the classical training to play well. So the fact that I got both the training and the technology background here has landed me a lot of gigs,” he says.

“I was able to do things at CU that I wouldn’t have been able to do anywhere else. I got to play with a lot of the older, graduate-level musicians because I was the only jazz piano major my junior and senior year. I grew and learned a lot by doing that.”

Eyes on the Big Easy

At just 24 years old, Thurston has a long career ahead of him. Fortunately for Denver audiences, he’ll be in the city at least a little while longer. “I’ll be here probably for another year or so, but ultimately I want to end up in New Orleans,” he says. “Denver is a really creative scene, and there are a lot of jazz fans here … but for a jazz professional, New Orleans is the place to be.

“I like New Orleans because the groove and the styles are on lockdown, even in the rhythm section of the band. The music feels right because the rhythm musicians are taking care of it. That’s what I see for Denver’s scene in a few years.”

He also hopes to hone in on a couple of particular styles. “My biggest piece of advice for young musicians is to really ask yourself what you want to do,” Thurston says. “You can be overwhelmed with different styles, and I’m a jack-of-all-trades. But I want to play more jazz piano gigs.

“The earlier you know exactly what you want to do, the better. Start working toward that.”

A new member of the College of Music faculty shares his approach to preparing students to become universal musicians, and fostering an environment of diversity and inclusivity. “It's not about hyper-specialization, but about flexibility, creativity and keeping an open mind,” he says. END_OF_DOCUMENT_TOKEN_TO_BE_REPLACED
Return to the top of the page