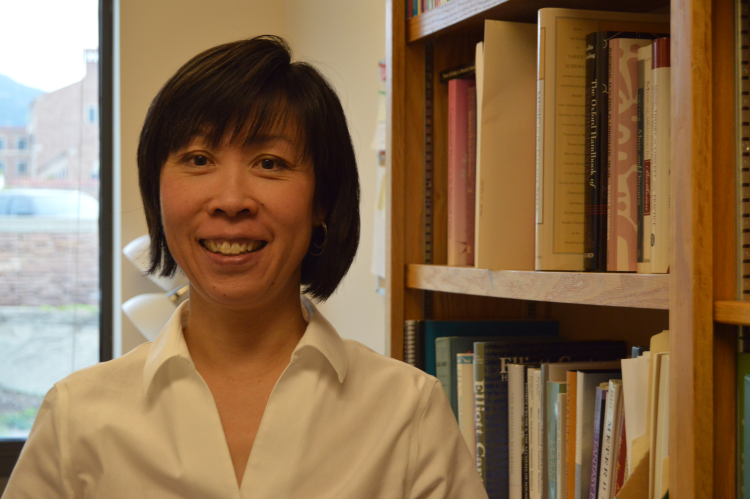 Associate Professor Daphne Leong has been named Vice President of the Society for Music Theory.

Music theorists from the University of Colorado continue to lead the development of their growing field. Most recently, Associate Professor of Music Theory Daphne Leong was elected Vice President of the Society for Music Theory (SMT).

SMT serves North America as a way to, according to its website, “promote the development of and engagement with music theory as a scholarly and pedagogical discipline.” Each member of the CU-Boulder music theory faculty is active in the group, along with students.

The vice president serves a two-year term, starting in November. Leong has been involved with the SMT since college. “In music theory, this is where things are happening,” she says.

Because music theory broke away from musicology and developed as a discipline in North America, the SMT represents the future of the field. One place where that plays out is the organization’s annual conference. “The conference is the one time per year when we all get together—national theorists and some international—and hear research, network and take care of important business,” says Leong.

One of her responsibilities will be organizing an aspect of SMT that she helped pioneer: interest groups.

“I’m excited to be involved in interest groups again,” says Leong. “In 2004, I started one of the earlier interest groups, called the Performance and Analysis Interest Group. When we talk about what makes pieces tick, it relates to performance, but not in a straightforward way. So the group I started looked at questions like these, and how what we do as analysts relates to performers.

“I’m thrilled to be in this role, and get to see what other interest groups are doing and what they’re working on."

Leong says there are SMT interest groups on everything from jazz theory to music and math. The groups bring music theorists together to stimulate research and promote publications. They also play a big role in growing the presence of the society.

“Interest groups put on sessions at conferences. By doing that, they help bring new people to the SMT who wouldn’t ordinarily know what we’re doing. They also advocate for other groups within music research,” says Leong.

Expanding the profile of music theory is a passion for Leong, and part of the collaborative mission of the SMT. It’s a tall order, since the fundamentals of theory are often, unfortunately, taken for granted.

“When we listen to music, we don’t always think about things like triads and chord progressions—the things that are happening that make us enjoy music or not enjoy it,” says Leong. “But knowing how to describe and think about music allows you to appreciate it more. And it makes you a better musician.

“It’s interdisciplinary. How music moves us, how math relates to it, how culture inspired it. Knowing those things can affect how we practice and how we perform. It’s innate and integral.”

Leong says this new leadership position will allow her to foster relationships between the SMT’s regional chapters, the North American organization and its international counterparts.

“I’m interested in those aspects where people connect,” she says. “It’s personal and research-focused, and the fact that you connect people and research—and dive into subjects with international groups, too—is thrilling.”

Curiosity drives Lydia Wagenknecht, a PhD candidate in ethnomusicology and recent recipient of a Fulbright Research Award. “I care that my research will help us understand something in a more broad-based way that we didn’t understand before,” she says. END_OF_DOCUMENT_TOKEN_TO_BE_REPLACED

We’re so excited to welcome alumnus Damani Phillips back to campus this week and to present him the College of Music’s 2022 Distinguished Alumnus Award at our commencement ceremony on May 5! “The versatile training provided by CU has been the cornerstone of my success to date, and has enabled me to do and be many things well beyond typical expectations,” he says. Meet Phillips and discover his powerful advice to graduating Music Buffs. END_OF_DOCUMENT_TOKEN_TO_BE_REPLACED

On May 5, we look forward to welcoming back Judith Glyde, formerly professor of cello and chamber music at the College of Music and chair of our string faculty. Since retiring in 2014 to live in New York City, the professor emerita she has been active with the college’s alumni community there, offering tremendous support to Forever Buffs who are now living and working in the city. END_OF_DOCUMENT_TOKEN_TO_BE_REPLACED
Return to the top of the page