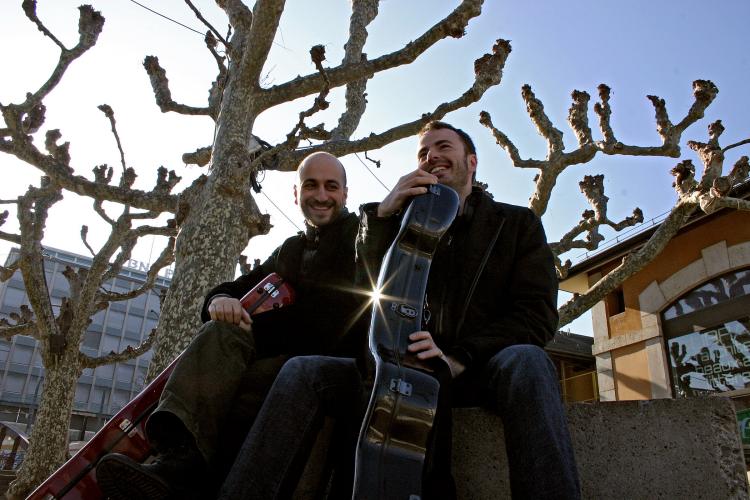 What does it mean when two classical guitarists, known the world over as one-of-a-kind—even life-changing—performers and teachers, choose to call Boulder their U.S. home-base?

“It means we are a great college of music.”

Spera is perhaps being modest. Since founding the program within the string department four years ago, he’s helped solidify classical guitar’s place in Boulder culture. In 2013, the program expanded to put on the bi-annual University of Colorado International Guitar Festival, attracting guitarists and guitar lovers from all over the world.

Then last fall, a gift from two CU alumni, Mikhy and Mike Ritter, resulted in an endowment and a new name for the program. Together with Spera’s work, the gift helped put CU-Boulder on the worldwide classical guitar map.

And the endowment made it possible for Nicolò to bring on his old teacher, Lorenzo Micheli, on a long-term basis.

“There’s no one like Lorenzo and Matteo. Anyone who’s taken a class of theirs will say that,” Spera, a native of Milan, says of his teacher from school in Italy. “Everyone is amazed at their insightful comments and what you can learn from them in just a half hour.”

"Nicolò has transformed the guitar program at CU-Boulder into one of the most important and attractive programs for the classical guitar in North America," Micheli explains.

Micheli and Mela, his performing partner of 11 years, travel the world teaching classes and giving performances. Hailing from Italy, they’re based at two of the most prestigious music conservatories in the world—Mela at Conservatoire Populaire de Musique in Geneva and Micheli at the Conservatorio della Svizzera Italiana in Lugano, Switzerland.

They’re preeminent. Global masters of their craft. That’s why Spera says bringing them on as visiting artists at CU-Boulder is such an achievement for the College of Music.

“This is the only college in the U.S. where they will be regular artists and teachers. When they tour the country, they will call Boulder their home. The community will be like family,” says Spera.

Mela explains that Boulder is like a second home to the duo. "It's a place where you can breathe a deep and genuine love for art, music and the humanities. We look forward to that experience again that extraordinary feeling of being so far from our native Europe, yet so close to everything that we love."

The pair, who has already performed and lectured at CU, will spend up to two weeks every semester in Boulder, working with individuals and ensembles on the graduate and undergraduate levels, and performing with students and faculty.

“Their presence is a response to the vision and the mission of the program,” Spera says.

Micheli says this is a once-in-a-lifetime opportunity for he and Mela as well. "This residency will give us the unique chance to work with Nicolò and his students and to share with them ideas, experiences, knowledge and all the invisible insights that turn music into a living thing."

Having Micheli and Mela at the college, Spera adds, will also do much to help broaden the musical culture at CU.

“Sometimes it’s hard to create an international environment, and bringing these successful performers and teachers to the program brings a richness to the community and the students.”

SoloDuo’s residency will begin in October 2015, at which time Spera says the Boulder community can look forward to “wondrous” performances, and students of the Ritter Family Classical Guitar Program can expect what he says is the most encouraging and positive lesson you can learn.

“Lorenzo and Matteo are the only teachers I’ve ever met who leave any student—at any level and any age—feeling better, happier and more motivated to practice after every single lesson.”

Curiosity drives Lydia Wagenknecht, a PhD candidate in ethnomusicology and recent recipient of a Fulbright Research Award. “I care that my research will help us understand something in a more broad-based way that we didn’t understand before,” she says. END_OF_DOCUMENT_TOKEN_TO_BE_REPLACED

We’re so excited to welcome alumnus Damani Phillips back to campus this week and to present him the College of Music’s 2022 Distinguished Alumnus Award at our commencement ceremony on May 5! “The versatile training provided by CU has been the cornerstone of my success to date, and has enabled me to do and be many things well beyond typical expectations,” he says. Meet Phillips and discover his powerful advice to graduating Music Buffs. END_OF_DOCUMENT_TOKEN_TO_BE_REPLACED

On May 5, we look forward to welcoming back Judith Glyde, formerly professor of cello and chamber music at the College of Music and chair of our string faculty. Since retiring in 2014 to live in New York City, the professor emerita she has been active with the college’s alumni community there, offering tremendous support to Forever Buffs who are now living and working in the city. END_OF_DOCUMENT_TOKEN_TO_BE_REPLACED
Return to the top of the page