One of the fundamental issues in the design of thermotropic and lyotropic LC monomers and polymer assemblies with additional functional properties is the compatibility of the functional element(s). Elements that give rise to properties such as catalytic activity, light emission, paramagnetism, etc. often do not have the correct shape or structural features to be conducive to thermotropic or lyotropic mesogenic behavior. In order to address this issue, part of our research effort is devoted to testing new LC design strategies for incorporating functional entities into LC monomers with preservation of the desired mesogenic properties and retention of the added functional properties.

One strategy that we have been exploring in the design of functional thermotropic LCs is substituting a functional element for a crucial component in different classes of thermotropic LCs. Our objective in this endeavor is to determine whether certain functional units can effectively play two roles, i.e., carry an orthogonal property and enforce thermotropic LC behavior. We recently synthesized the first example of a luminescent hexacatenar LC (10) in which the rod-like core is substituted with a conjugated unit. Depending on the alkyl tail length, this molecule displays the columnar hexagonal phase typical for this type of LC, indicating a tolerance for the new core (Figure 12). Experiments have shown that the emission properties of these LCs are dependent upon their degree of molecular organization.

We have made polymerizable analogs of this new class of photoactive LCs. The resulting polymer networks are being studied as anisotropic light emitting materials and photoconductors. New polymerizable tail systems containing terminal 1,3-diene units were developed for these LC systems because of their incompatibility with traditional polymerizable groups (e.g., acrylates, styrenes)
.
A different strategy that we have been exploring for integrating functional properties into lyotropic LC assemblies is the use of a structure-directing agent to template or blend functionalized monomer with weak or non-mesogenic properties into the desired lyotropic LC phase. We have found that the L-alanine monomer (4) acts as an effective lyotropic LC structure-directing agent for bringing functional derivatives of monomer 1 into the HII phase, even though the latter compounds may not show good mesogenic properties on their own (Figure 13). Using this approach, we have managed to induce derivatives of 1 containing strong acid headgroups, chiral organic catalyst groups, and even controlled radical polymerization catalyst groups to form the HII phase for subsequent in situ cross-linking. We are in the process of determining the breadth and scope of this method for bringing even more sophisticated functional groups into lyotropic LC registry for the design of new materials. 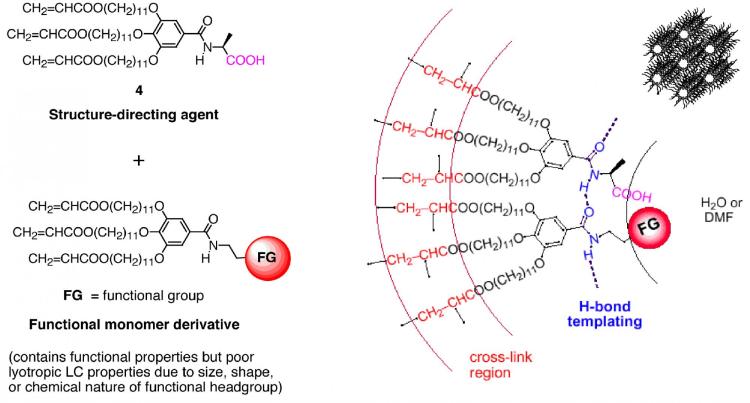 Figure 13. Templating of functionalized derivatives of monomer 1 into the HII phase using a H-bonding structure-directing agent (4).

We also discovered a second method for inducing functional derivatives of 1 containing slightly Lewis basic sites on the headgroup to form lyotropic LC phases without an additional LC templating agent. We discovered that weakly mesogenic or non-mesogenic derivatives of monomer 1 containing weakly Lewis basic sites on the headgroup can be acidified with nonvolatile Brønsted acids (HX). The resulting transient salts of the monomers tend to have the required amphiphilic LC character to form stable lyotropic LC phases, even though the neutral starting monomers do not. Applying this acid-induced lyotropic LC phase formation strategy to chiral Diels-Alder catalyst monomer 11, we found that we were able to simultaneous activate the catalyst, as well as allow the system to form stable lyotropic LC phases. In fact, the type of lyotropic LC phase formed depends on the strength, stoichiometry, and type of conjugate base anion in the acid used (Figure 14). The resulting lyotropic LC assemblies (11/nHX) can then be photo-cross-linked to afford nanostructured, heterogeneous, chiral Diels-Alder catalysts with good active site accessibility (66–72%) and high enantioselectivity. We have also successfully applied this approach to induce HII phase formation of neutral, non-mesogenic derivatives of monomer 1 containing oligo(ethylene oxide units) units on the headgroup. Consequently, this acid-induced lyotropic LC phase formation behavior also appears to be a fairly general for enabling functional units and properties to be incorporated into polymerizable lyotropic LC assemblies.