In addition to nanocomposite synthesis and catalysis, we have also successfully shown that these cross-linked lyotropic LC phases can serve as a new type of nanoporous polymer membrane for molecular size-based water and gas filtration. Aqueous separation processes employing polymer ultrafiltration membranes with pore sizes in the 1 to 100 nm range are important in industry and healthcare. Unfortunately, current membrane technologies afford extremely poor control over critical features such as pore size, pore architecture, and pore density in this size regime. However, lyotropic LC assemblies offer this control. Features such as pore size and interchannel spacing can be altered via structural modifications to the constituent monomer. In order to test our materials as membranes, we pioneered novel pre-polymerization processing procedures that afford largely pinhole-free films of 1 after cross-linking. Collaborative efforts with Prof. Rich Noble in the Dept. of Chemical and Biological Engineering at CU Boulder have demonstrated that it is possible to solution-cast submicron thick films of the HII phase of 1 onto commercial ultraporous polymer supports. Water solution permeation studies on the resulting composite membranes indicate that they able to completely reject water-soluble molecules and ions greater than or equal to the 1.2 nm diameter pores, allowing them to cleanly separate molecular mixtures straddling this size threshold. For example, water-soluble rigid dye molecules larger than the 1.2 nm diameter pores are completely rejected while dye molecules smaller than the pores are transported (Figure 5). Control experiments with molecular substrates that do not exhibit any sorption or staining with the membrane components confirmed that the separation mechanism is molecular size discrimination, not differences in chemical affinity between the substrates and the membrane.

Figure 5. TEM photo of the cross-linked inverted hexagonal phase of monomer 1, and size-selective nanofiltration in water through a supported membrane of the material on PSf support.

We have recently designed second-generation lyotropic LC polymer membranes with a type I bicontinuous cubic (QI) phase containing 3D-interconnected nanopores. The resulting supported type I bicontinuous cubic membranes are formed by gemini phosphonium monomer 5 and were found to have a uniform, 0.75 nm wide, annulus-type pore system that is small enough to remove hydrated salt ions and very small neutral molecules bigger than ca. 0.75 nm in diameter from water (0.25 nm kinetic diameter) in a single pass, affording a new type of water desalination membrane that operates by predictable molecular-size-exclusion through discrete sub-1-nm-size pores (Figure 6). This desalination process is intermediate between classical reverse osmosis (RO), which operates via dense membranes; and nanofiltration (NF), which operates through conventional porous membranes that do not have uniform pores on this very small size scale. Our work in this area was written up in Nature as a research highlight in 2007. 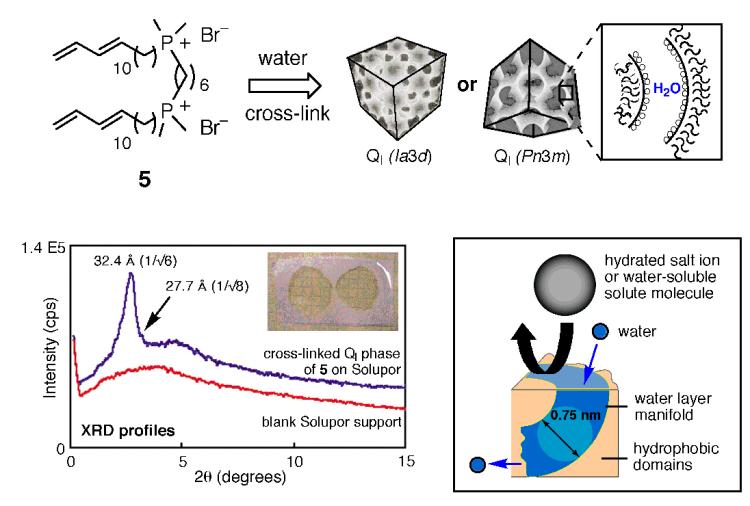 In addition to water nanofiltration and desalination, we have also demonstrated that lyotropic LC monomers 1and 5 can be blended and copolymerized with commercial hydrophobic polymers used for vapor protection, such as butyl rubber (BR), to make “breathable” nanoporous barrier materials for chemical warfare agent (CWA) protection. The nanoporous lyotropic LC domains allow water vapor to be selectively transported through an otherwise impermeable polymer material. The water-filled nanochannels are sufficiently hydrophilic and/or small enough to selectively allow only water molecules (0.25 nm diameter) to pass through easily, while almost completely rejecting larger, more hydrophobic thioether- and phosphorus ester-based CWA simulant molecules (i.e., chloroethyl ethyl sulfide (CEES) and dimethylmethylphosphonate (DMMP)) (Figure 7). This effect affords evaporative cooling for the wearer, which is not possible in conventional cross-linked, dense BR protective garments. One of our lyotropic LC-BR breathable vapor membrane papers received international attention from the scientific and mainstream press in late 2006. 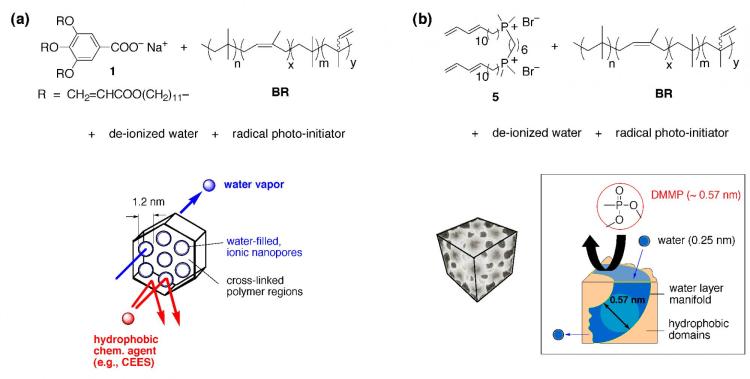 Work on modifying the shape, structure, and size of these lyotropic LC monomers to incrementally adjust the effective nanopore size on the 0.5–1.5 nm scale is currently in progress. The Gin group has recently successfully designed and demonstrated a 2nd-generation bicontinuous cubic phase lyotropic LC monomer (6) based on a gemini ammonium headgroup unit (Figure 8), in order to reduce the synthesis cost and improve the processability for potential commercialization as water filtration membrane and protective fabric materials. Monomer 6 is much easier and economical to produce compared to our first phosphonium monomer 5, and is much more amenable to scale-up and modular modification. Water NF tests on supported, cross-linked QI-membranes of 6 have shown that they have a uniform, 0.86 nm wide, annulus-type pore system. We are in the process of designing new monomers with chiral or reactive groups to generate nanoporous membranes capable of selective transport based on chemical or stereochemical differences. 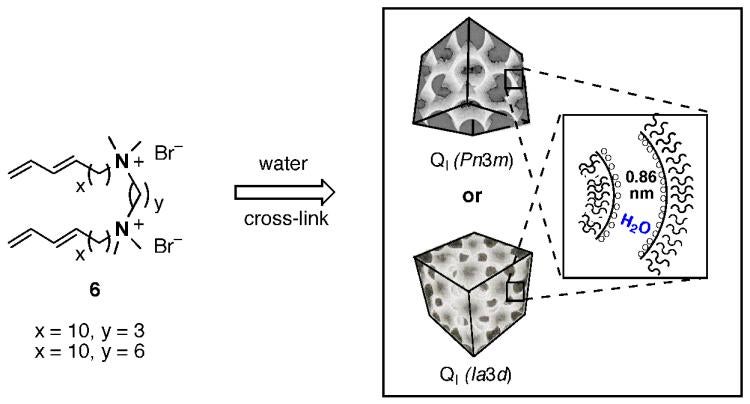 Figure 8. Structure of new gemini ammonium lyotropic LC monomer 6 that can be cross-linked in the QII phase with uniform, 0.86 nm-wide, annulus-type nanopores.