A second area of investigation with these cross-linked lyotropic LC assemblies is their potential catalytic properties because of their structural similarity to inorganic zeolites and mesoporous sieve catalysts. Zeolites and mesoporous sieves such as MCM-41 are able to facilitate acid- or base-catalyzed reactions by localizing reactants in their nanopores and providing a high local concentration of active sites. The cross-linked HII phases of 1 and 2 contain ordered channels of similar size that are lined with ionic functional groups. Though careful physical studies, we have demonstrated that cross-linked 2, containing weakly basic sodium carboxylate groups in the nanochannels, exhibits enhanced basicity as result of the ordered structure. In addition, it acts as an efficient heterogeneous base catalyst for the Knoevenagel condensation of benzaldehyde and ethyl cyanoacetate, with a performance surpassing that of basic forms of zeolite Y and MCM-41 (Figure 3). (This work was highlighted in the Oct. 18, 1999 issue of Chemical & Engineering News.) Since then, we have shown that catalytic Lewis acid sites such as Sc(III) can be ion-exchanged into the cross-linked inverted hexagonal phases to yield heterogeneous catalysts that afford enhanced stereoselectivity in organic coupling reactions in water. More recently, we have designed a new -SO3H derivatized LC monomer system based on monomer 3that affords cross-linked inverted hexagonal assemblies containing strongly Brønsted acidic nanochannels via hydrogen-bond templating with a lyotropic LC structure-directing agent (monomer 4) (Figure 4). These nanostructured acid resins were found to have similar activities to commercial amorphous, solid acid resins such as Amberlyst-15 and Nafion NR50 in catalyzing esterification reactions; however, they exhibit much higher product selectivities and produce less side-products (Figure 4). (This work was highlighted in the Mar. 1, 2004 issue of Chemical & Engineering News.) 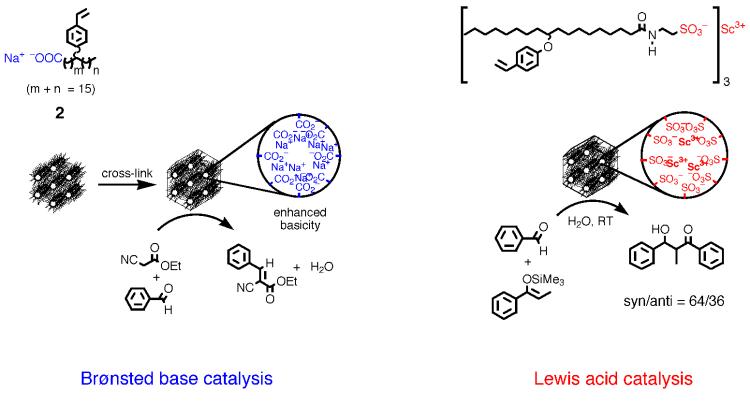 Although many approaches have been taken to try and make organic “analogs" to zeolites and molecular sieves in the literature, we believe that we have generated the first organic platform that exhibits all the essential features of the inorganic catalysts: ordered nanopore architecture, high reactivity, excellent site accessibility, robustness, and substrate size selectivity. We recently found that the methods used to incorporate acidic and basic catalytic headgroups into polymerizable lyotropic LC assemblies can also be extended to other types of catalytic groups, such as chiral Diels-Alder reaction catalysts and “controlled” radical polymerization catalysts.