In addition to designing new types of functionalized RTIL molecules, we have also been making ionic polymers based on RTIL building blocks to make solid-state ionic materials with RTIL-like gas selectivity properties but solid mechanical properties. For example, we have made a number of imidazolium-based RTIL monomers that afford linear side-chain, main-chain, and amorphous cross-linked ionic polymers (Figure 17).

Figure 17. Some of the functionalized imidazolium monomers prepared by our group to make new RTIL-based ionic polymers for light gas separations.

We are in the process of making and exploring the properties of other polyelectrolyte architectures based on imidazolium RTIL units. For example, with the help of Prof. Travis Bailey's group at Colorado State University, we recently designed, synthesized, and characterized one of the first examples of an RTIL-based, alkyl-ionic diblock copolymer that forms an ordered, nanophase-separated morphology in the pure melt state (as opposed to simple micelles and vesicles) (Figure 18). We are in the process of learning to prepare supported membrane films of this new type of block copolymer for CO2/light gas separation testing, since block copolymer nanostructure has been shown by other researchers to affect gas transport properties. 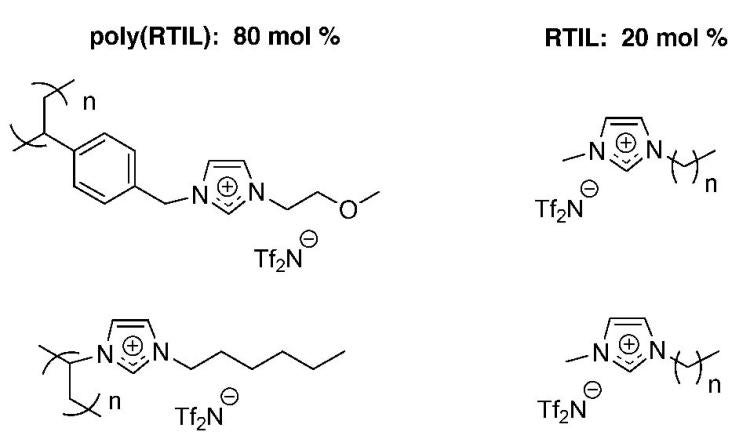 We are currently extending that work to ordered ionic polymer-RTIL solid-liquid nanocomposites by designing lyotropic LC monomers based on imidazolium units to make nanostructured polymer networks around the RTIL fluid component.

In an effort to maximize the gas permeability of RTIL-based membranes, RTIL gels have been used to make solid materials with liquid-like gas transport properties. These soft-solids are composed of 95–98 wt % RTIL plus a small amount of a low-molecular-weight organic gelator (LMOG). We have recently made supported RTIL gel membranes and showed that the CO2 solubility selectivity for the RTIL gel (containing only a few wt % LMOG) is the same as the neat RTIL and that the gas permeability is slightly (10%) lower than the neat RTIL (Figure 20). There are many examples of LMOGs and hydro-gelators in the literature, but there are only a handful reported to gel RTILs. Prior to our work in this area, LMOG-gelled RTIL systems were unprecedented for use in gas separations. We are in the process of designing new LMOG structures specifically for RTIL gelation and use as a new type of CO2 separation membrane materials with the best properties of solid film and supported liquid membranes. 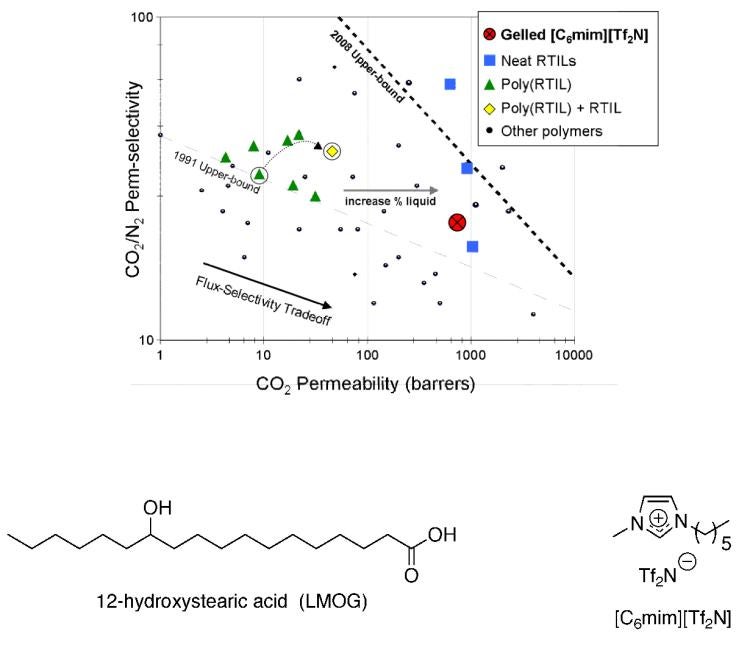 For functional RTIL-based CWA and TICs vapor protection membranes and materials, we recently developed two new functionalized poly(RTIL) composite membrane materials that allow extremely facile water vapor transport for evaporative cooling, while completely blocking the transport of the blister CWA simulant, CEES, in vapor form. The first system is based on a new hydrophilic poly(diol-RTIL) that readily transports water vapor, blended with a commercial organic amine or co-polymerized with an amine-containing co-monomer (Figure 21a). The second system is based on the same hydrophilic poly(diol-RTIL) that exhibits high water vapor breathability, but it is blended with basic zeolite particles (e.g., Na-zeolite Y) instead of amine additives to react with CEES (Figure 21b).