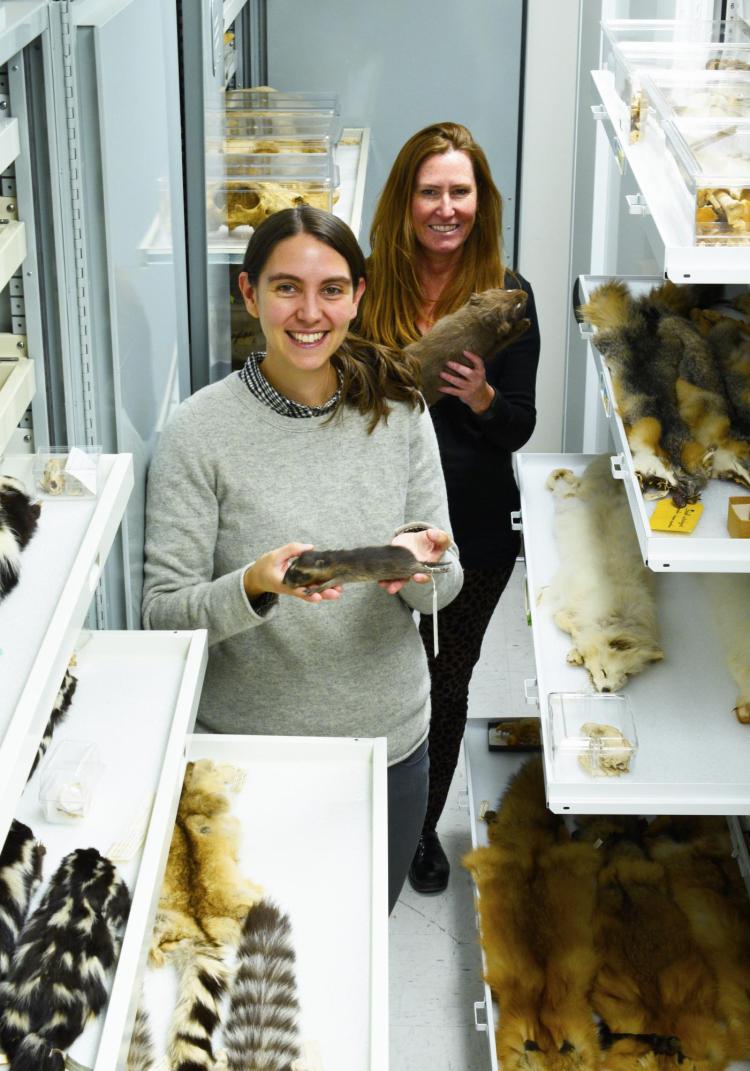 The CUMNH Vertebrate Collections are a biodiversity repository of more than 130,000 extant specimens from five taxa: Fishes, Amphibians, Reptiles, Birds, and Mammals. With the exception of birds, our collections are the largest of their kind in Colorado and document changes in biodiversity over the last 200 years. In addition to being historically significant, the scope of our holdings is global. Over 100 countries are represented by the collections, with geopgraphic strengths in Colorado, the Rocky Mountains, Great Plains, Great Basin, and Mexico.

The mission of the Vertebrate Section is to:

Vertebrate specimens are actively used by university faculty, students, and researchers for scientific research, as well as by the general public for science education, artistry, and natural history programming. All vertebrate specimen data are available online at ARCTOS.

The herpetology collection spans 77 countries, although its geographic strength is Mexico and the southwestern USA. Our Mexican reptile specimens have been most actively studied and cited in systematic herpetology publications over recent decades. Additionally, the whiptail lizards (genus Aspidoscelis) are particularly well represented, including over 12,000 fluid-preserved specimens and two hundred dry skulls. The world-renowned herpetologists, Hobart M. Smith, and T. Paul Maslin, as well as a number of their students and collaborators, were the major architects of our largest vertebrate collection. R. Earl Olson's contribution of 3,800+ specimens recently expanded our taxonomic and geographic coverage, including new material from Minnesota and Haiti. Most recently, Julio A. Lemos-Espinal contributed 2,600 specimens from the northern Mexican states of Sonora, Chihuahua, and Coahuila. Specimen data are available on ARCTOS: herpetology.

Twenty-five countries are represented in the mammal collection, though most specimens are from Colorado (nearly 70%) and other western states. Specimens are typically preserved as a set of a study skin and an extracted skull, although large mammals are prepared also as hides, taxidermy, and skeletons. Many people have added to the mammal collection over the years, including the pioneer Colorado naturalist, Edward Royal Warren (3,000+ specimens), Donald A. Spencer, Dallas A. Sutton, Leslie Viereck, and emeritus professor and former Museum Director, David M. Armstrong. E.R. Warren's archive of field notes and photographs are an invaluable resource for documenting distributions and changes of Colorado mammals in the first three decades of the 20th century. Specimen data are available on ARCTOS: mammals.

The geographic scope of our bird specimens is global representing 38 countries, including over two hundred from Colombia. But as in all of our collections, the emphasis is on Colorado species (over 80% represented) and collecting from the early 1800s to the present. Nearly 6,000 specimens were donated by the Colorado College Museum in Colorado Springs in the 1960s. This material includes the collection of Charles E. Aiken, a pioneer ornithologist in Colorado, and dates back to 1805. The bird collection is also home to several specimens of iconic extinct species such as Passenger Pigeons and Carolina Parakeets. Our egg and nest collection is of historic value, containing specimens mainly from Colorado and parts of the midwest, and featuring groundwork laid by Denis Gale and G. Morrison on Boulder County avifauna from the late 1800s. Specimen data are available on ARCTOS: birds and ARCTOS: eggs and nests.

The collection of fishes is primarily preserved in fluid, normally 70% ethanol solution. The majority were collected in Colorado, although there is a worldwide representation of both marine and freshwater species. Many specimens were collected in the early 1900s by Max M. Ellis, including several hundred from Guyana. The collection also includes about 2000 Salmonid specimens donated by Robert J. Behnke, Colorado State University Professor Emeritus and the author of Trout and Salmon of North America. Nearly 10% of our holdings are representatives of endangered and threatened species. Specimen data are available on ARCTOS: fish.