The Wonder of Glass

The people of the Roman Empire were a mix of many different cultures, religions, and societies. They enjoyed varying economic statuses and took advantage of the extensive trade network throughout the Empire. Trade allowed new and foreign technologies and materials to be quickly distributed across the Mediterranean Sea and to lands beyond. The methods for creating and shaping glass originated in the eastern region of the Empire, according to Pliny the Elder, a 1st century C.E. Roman author and naturalist. In Natural History XXXVI.65, Pliny reported that the material of glass was discovered accidentally by Phoenician merchants on a beach in the region of Syria long before the Romans ruled the Mediterranean. In actuality, the technology of glass probably developed in the regions of ancient Mesopotamia and Egypt, where the oldest manufactured glass objects have been found. 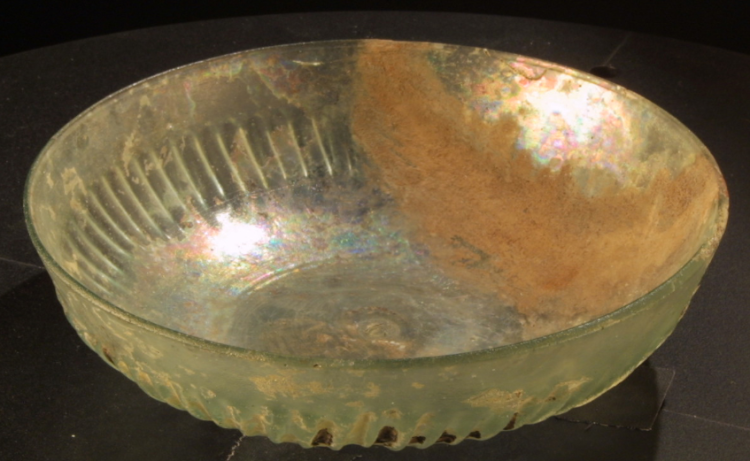 Ancient people found that glass was an incredibly useful material. When cooled, it hardened into a solid that could be used for storage or decoration. When reheated, the glass became pliable and could be manipulated into shapes such as beads, bowls, vases, and figurines. Glass in ancient Rome served the purposes of gold, silver, and ceramics, yet was less expensive than the metals and more impressive than the terracotta. In its most desirable form it resembled the clear and colorless rock crystal that was so highly prized by Romans. Even so, luxury glass items were produced for wealthy and elite Romans.

Roman Glass in the CU Collection

The glass objects in the CU Art Museum collection represent a wide array of quality and types. Many of the small or narrow bottles once held perfume or oil, which was used for beautification by Roman men and women. Other vessels such as bowls were used for other purposes such as formal dining.