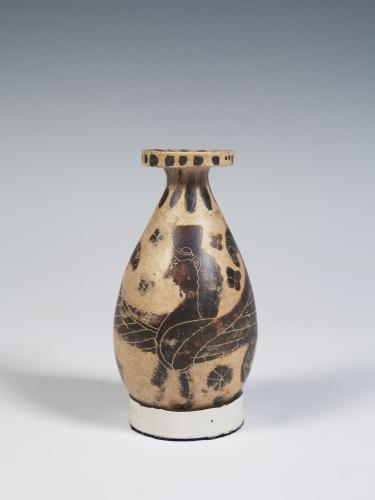 Additional photos of this vase show details of the mouth, base, and decoration.

This vessel is an Early Corinthian (c. 620-590 B.C.E.) alabastron (plural: alabastra). Its small size is typical of alabastra from the Early Corinthian period. This alabastron has a footless rounded base, with a wide, flat mouth. Its narrow neck tapers into a wider belly. Its fine clay has a light buff color, as is typical of Corinthian vessels, and its decoration is added in black slip. Black tongues decorate the mouth, neck, and vase of the vessel; small black circles dot the rim; and a black line is painted on the (now-broken) handle of the vessel (1).

The main body of the vessel is decorated with a single figure of a sphinx, located on the side opposite the handle, and rosettes. The figural decoration on the body is not confined by any horizontal bands. The body decoration is painted in silhouette with black slip and decorative details were added by incision. The artist added red paint on top of the black slip to alternating feathers of the wings and face of the sphinx before incising details and firing the vessel. In some places, however, black slip seems to be missing beneath the red paint, suggesting that, perhaps, the red paint was applied later, after the vessel had aged and some of the decoration had weathered or chipped away.

A sphinx is a mythological creature with the body of a lion, wings, and the head of a human woman. Here, the sphinx rests on its haunches and is facing toward the viewer's left. The face is in profile and the face bears traces of red paint. The hair is long and thick; it runs down the back of the head and is held in place by a fillet or ribbon. On top of the head is a high, cylidrical hat called a polos. The wings are outspread and curl upward. Individual feathers are indicated by incision and additional flourishes are added in red paint. The front legs are staggered as the figure rests on the back legs. A long tail extends and curls backward from the animal. Hastily drawn rosettes fill the space beneath and around the sphinx's body.

Small clay alabastra gained popularity during the 7th century B.C.E., reaching a peak in popularity toward the end of that century. The shape was gradually replaced by another oil vessel, the aryballos, during the 6th century B.C.E. (2). The alabastron gets its name from earlier vessels of a similar pear shape that were made of alabaster, a kind of stone, in Egypt and the Near East (3). Two such vessels, though not of an early date, can be seen in the CU Art Museum's collection: one is 4th century B.C.E. Macedonian stone alabastron, while the other, a 6th century B.C.E. Anatolian alabastron, is closer in date to this Early Corinthian ceramic example. Greek and Eastern alabastra are made of many materials, including stone, clay, glass, and faience (4). The droopy shape of this ceramic vessel may derive from the shape's relationship with animal skin flasks (5).

Alabastra were used to hold ointments and perfumed oils. The Greeks used ointments and perfumed oils for a variety of purposes, including as medicines, for ritual purposes, or in the act of bathing. Alabastra would typically be hung, possibly by a string looped through the handle. This type of vessel is often portrayed in Greek vase painting in association with athletes and bathing.