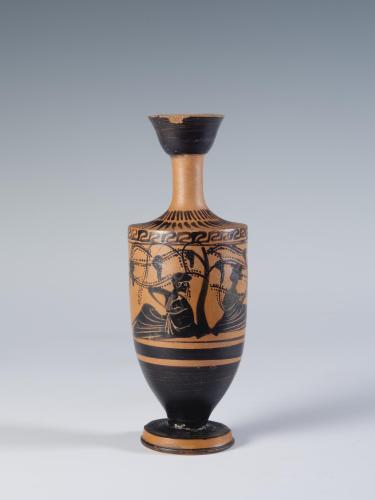 A major source of evidence for ancient Greece is painted pottery. The two most popular decorative styles of ancient Greek pots are black-figure vase painting, practiced primarily in the 6th centuries B.C.E., and red-figure vase painting, developed from the late 6th through 4th centuries B.C.E. Despite the names for these styles, decoration was largely created not with paint, but with a material called slip, a liquid mixture of clay and water (1). Slip was an integral component of ancient Greek vase construction and decoration (1).

In ancient Greece, slip seems to have been about 20 percent clay and 80 percent water. It is more accurately referred to as levigated slip because the coarser particles in the clay were removed by the process of levigation. Ancient Greeks may also have used potash to deflocculate their slip, a process that allows clay particles to remain suspended by prohibiting them from adhering to one another.

Slip functioned in a variety of ways in ancient Greek vase construction and decoration. Slip was, for example, used as an adhesive for attaching appendages to the body of a vessel. Likewise, it was applied as decoration to the surface of a vessel while it was leather-hard and before it was fired in a pottery kiln. When it is used as decoration, slip is applied like paint, that is, with a brush or similar tool. Unlike paint, however, slip has the advantage of bonding with the surface of the clay vessel and, for this reason, it is more durable than paint.

The black-figure and red-figure techniques of ancient Greek vase painting were achieved using slip, not paint. The familiar black color of ancient Greek slip resulted from the natural presence of iron oxide in the clay, which turns black during the firing process. Other colors could be achieved by adding various materials to the slip mixture. White, for example, was created by using a pure primary clay, one that had few or no iron oxides. Red slip was created by the addition of red ochre to the slip mixture, while brown was produced by using a more diluted solution of the standard black slip (2). Ancient Greek vase painters used slip to its full extent to create lively scenes and decorative elements on the surfaces of vases.