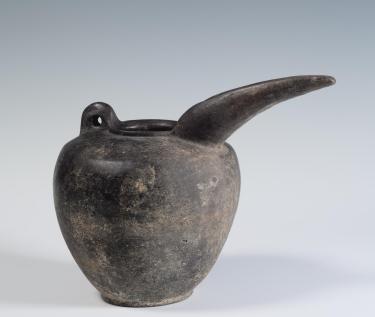 A common method for making a lid was to use the potter's wheel, just as in the creation of the vase itself. If a lid required a flange to hold it in place, as for an amphora or a stamnos, or if it fit over the outside of the mouth of a vessel, as for some types of pyxides and psykters, the potter would throw the lid upside-down.

Spouts can be either open or closed. In ancient Greece, open spouts were made primarily on shapes like the trefoil oinochoe. The potter created the open spout of this jug by squeezing the sides of a round mouth inward at two places while the clay was still wet, which resulted in an outward protrusion between the indentations.

Closed spouts, on the other hand, were cut to shape from a slender cylinder shape. Such spouts can be found on shapes such as the askos and the guttus. Spouts on these vessels could take on unusual forms, as on a Geometric bird askos in the Cleveland Museum of Art.

Handles can be formed by pulling, rolling, extruding, or throwing. In ancient Greece, most handles were created by pulling. To pull a handle, the potter would take a cone-shaped lump of clay in one hand and, using the other hand and starting at the widest part of the cone, squeeze and pull the clay into a long rope. Once the rope had been forced into the proper curve required for the handle and had dried slightly, the potter would cut off a section of appropriate length and attach it to the vessel body.