The Production of Pottery 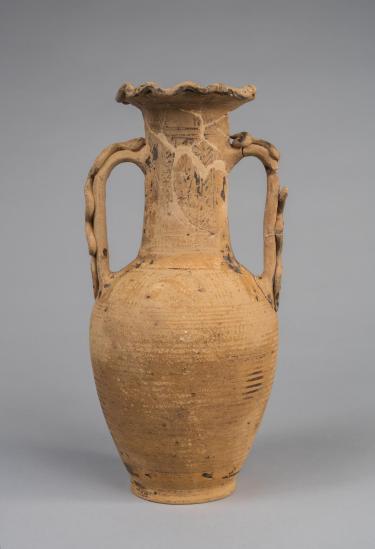 Evidence for the production of pottery dates back to as early as 14,000 B.C.E. in Japan and especially during the Jōmon period, which constitutes Japan's Neolithic period (1). The technology of pottery production emerged in the Near East around the same time as the formation of permanent settlements and was well established as a practice by the 5th millennium B.C.E. (2). Its development alongside permanent settlements makes sense because the fragile nature of pottery, its weight, and the requirements for its production, including a clay source, a firing location, and fuel, makes it an impractical medium for use by nomadic people (3).

The raw material of pottery is clay, which is rarely used in its unprocessed state. In order for clay to be used to make pottery, it must first be dug out of the ground and gathered into a common location. A scene decorating a 6th century B.C.E. cup shows a potter's workshop, including the pile of clay gathered for use in the production of pottery. After it is gathered, the clay is then mixed with a large amount of water in a basin and allowed to settle in a process called levigation. Lighter impurities, such as twigs and leaves, rise to the surface and are removed, while heavier impurities, such as rocks, sink to the bottom. The middle layer of clay and water is then poured off into a separate basin, leaving the separated impurities behind. This process is repeated until the mixture of clay and water has attained a suitable state of purity, depending on the needs of the potter. Some of the water is allowed to evaporate and the clay partially hardens. The plasticity of the clay that is produced at this stage is unsuitable for throwing on a wheel and it must therefore be allowed to mature before it can be formed into a vessel (4). The mature clay is then thoroughly worked in a process called wedging, which aligns the clay particles and removes air bubbles.

The techniques for constructing a pot can be divided into two categories: hand-building and throwing. Hand-building is the process of forming a pot without the aid of the potter's wheel. Two methods of hand-building a vessel are pinching and coiling. The simplest, and possibly the earliest, method is pinching. In this method, a fist-sized ball of clay is pinched into the shape of a bowl: first an indent is pressed into the center and then the walls are squeezed, or pinched, to the desired thickness. In the coil method, ipre-rolled strips of clay are joined, one on top of the other, to a base. The coil method may have developed out of the pinching technique.

When a potter constructs a pot with the use of the potter's wheel, the process is called throwing. This is the most technically complicated method of pottery production. Larger vessels were too big to be thrown in one piece and were therefore either thrown in separate sections and then combined or were partially thrown and completed with coils (5).

Regardless of whether a pot was hand-made or wheel-made, it is then allowed to dry to a leather-hard state. At this point, the vessel is turned or trimmed, depending on whether it was wheel-made or hand-made, a process that involves removing excess clay. Finally, appendages like spouts, handles, and lids are added.

In ancient Greece, the surfaces of completed pots were frequently decorated. Incised lines are the earliest form of surface treatment, but the technique of applying the characteristic black slip in decorative patterns was perfected in the Bronze Age and later refined in the 7th century B.C.E. After decoration was applied in the black-figure technique, which was most popular in the 6th century B.C.E., or the red-figure technique, which was most popular in the 5th and 4th centuries B.C.E., the pot was left to dry thoroughly before it was fired. During the drying process, vessels would shrink a certain amount, although the greatest shrinkage occurred during firing.

After a vessel dried to the point where it is no longer cold to the touch, it was placed in a pottery kiln and fired. The ancient Greeks used a three-stage firing process that consisted of a cycle of oxidizing, reducing, and re-oxidizing the atmosphere inside the pottery kiln. This three-stage process was necessary to achieve the lustrous black gloss of the slip against the natural or augmented color of the clay. The main fuel source in the ancient Greek pottery industry was wood. During firing, the ancient Greek potter monitored the temperature of the kiln visually. This was done either by looking directly into the kiln through a small hole and observing the color or by taking out draw trials, small pieces of clay with slip on them that served as test pieces.

Some vessels, including white-ground lekythoi, were painted in the traditional sense after firing. The paints got their color from plants or minerals and did not adhere to the surface of the vessels in the same way or as well as slip. As a result, these added colors survive only under exceptional circumstances (6).