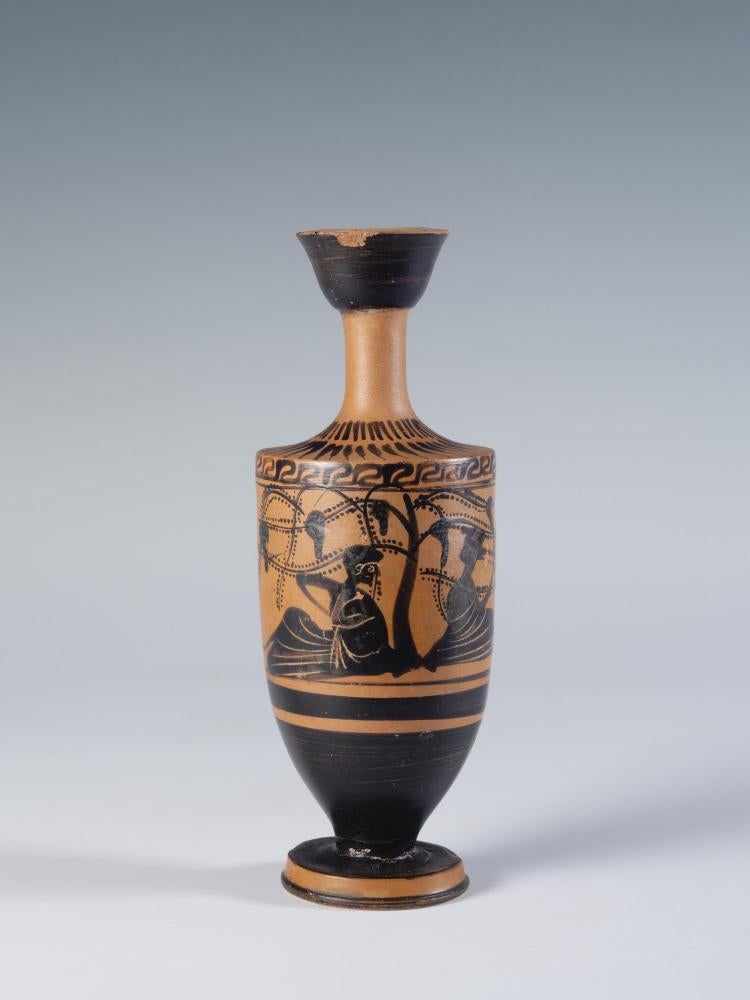 The black-figure technique of vase painting was invented in the city of Corinth around 700 B.C.E. It was around this time that Corinthian vase painters began adorning their vessels with animal friezes and occasional mythological scenes and they developed this new style of painting to depict these motifs. In this style of decoration, figures were drawn in silhouette on the surfaces of leather-hard vessels using black slip. Details were added using incision, which revealed the color of the clay beneath. Although it was invented by the Corinthians, the Athenians quickly adopted the black-figure technique and made it their own. Easily one of the most remarkable examples of the black-figure technique of vase painting is an amphora by Exekias showing the Greek heroes Achilles and Ajax playing a game of dice. This scene was so famous in antiquity that it was copied over 150 times.

As the name indicates, the figures on these vases were black silhouettes set against the color of the clay beneath, which, in Athens, was a red-orange color. The production of black-figure vases was a lengthy process and it began with the procurement of the clay. Potters in ancient Athens used a process called levigation, whereby clay is mixed with water and heavy impurities allowed to sink to the bottom. This process was repeated until the clay had reached a sufficient level of purity and therefore plasticity. The clay was wedged in order to eliminate air bubbles before it was thrown on the potter's wheel. In ancient Greece, the potter's wheel was a large wooden or stone disk attached to an axle, which sat atop a pivot point on the ground. The wheel was kept in motion by a slave or potter's assistant, allowing the potter to use both hands to form the vessels (1). Most pottery was made in sections and appendages like lids, spouts, and handles added after the vessel had dried to a leather-hard state.

Once a vessel had dried to a leather-hard state, it could be burnished and/or decorated. The process of burnishing a pot involves rubbing it vigorously with a hard, smooth object, such as leather, wood, or a stone, in order to compact and smooth the surface of the clay (2). A light coating of red ochre was sometimes applied and the vessel re-burnished, enhancing the natural red-orange color of the clay (3). A sketch of the final design was then made on the surface of the vessel using charcoal. The vase painter then applied black slip to the areas to be decorated and used a sharp tool to incise any necessary details, a process that revealed the color of the clay beneath.

After the decoration was applied, the vase painter -- who may sometimes have also been the potter -- could choose to add additional colors. Whites, reds, and yellows were the only colors able to withstand the high heat of the pottery kilns. Colors were applied according to certain conventions that developed along with the black-figure technique. White, for example, was used to indiciate women's flesh, while men's flesh was usually left in the black color of the slip, although it was sometimes painted over in red. The application of red and white could be used to create patterns, such as stripes on drapery or the ribs on an animal (4). White could be used to enhance the beards of elderly men, while red sometimes picked out the hair of other human figures or the manes of horses (5).

Once the vessel has been decorated, it progresses through a three-stage firing process. This three-step firing process, which consisted of a cycle of oxidizing, reducing, and re-oxidizing the atmosphere inside the pottery kiln, was necessary to achieve the lustrous black gloss and the reserved red-orange decorative panels (6). The three-stage process occurred in the following order:

Ancient Greek potters and vase painters did not have thorough understandings of the chemistry involved in these processes, nor tools with which to measure temperature precisely. Pottery production was, then, a process of trial and error and, as consumers of their art, we can marvel at their abilities to make pieces that were both beautiful and functional.