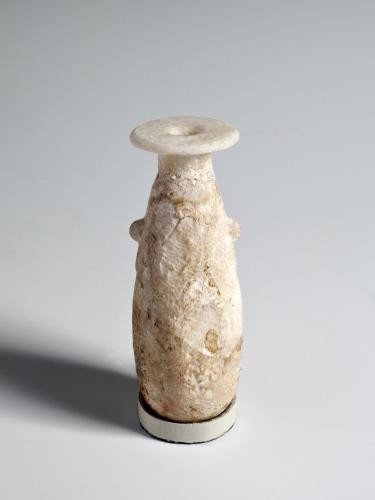 This vase is one of a collection of vases held by the CU Art Museum.

Description: Small white alabastron with a relatively wide, flat lip and two small lug handles on opposite sides of the body.

Additional photos of this vessel show details of the mouth, rim, neck, handles, and base.

An alabastron is antiquity's version of a perfume bottle: it is a long, thin flask with a long, narrow neck and rounded bottom. Its small lug handles were often pierced to allow the vessel to be suspended with string. The content of alabastra was luxurious purfumed oil that was used for decorative or funerary purposes. Alabastra had a unique shape with a small opening that was ideal for pouring oil. Originating in Egypt and Syria, the alabastron shape found popularity in ancient Greece, where it was produced in a variety of materials, including stone, clay, glass, and precious metals from an early date. A late 7th century B.C.E. Corinthian alabastron in the CU Art Museum's collection, for example, shows how the shape could be interpreted in a Greek context.

This delicately rendered stone alabastron bears strong resemblance to counterparts made both in stone and precious materials during 6th century B.C.E. in Anatolia, modern Turkey. At least ten stone alabastra were found in the Ikiztepe Tomb and are now a part of the so-called Lydian Treasure, which dates to the second half of the 6th century B.C.E. The alabastra in this tomb were made from a beige-brown banded alabaster and, incidentally, each bore two small side lugs in the shape of duck heads. Similar duck-head lugs are found on contemporary silver alabastra. The silver and stone duck-head lugs are unpierced.

The production of glass, stone, and clay vessels first began in Egypt in the 2nd millennium B.C.E. and the concept and technologies slowly made their way to the Greek world. Egyptian influence is easily identifiable in the alabaster vessels. The stone, in fact, was quarried in the what has been called Alabastron but is known today as Stone Village, located near Tell el-Amarna along the Nile River, and was held in high esteem in Egypt, where it was used to manufacture luxury items, especially perfume bottles and ointment vases. Egyptians were well-known for their stoneworking in antiquity.

This is one of two stone alabastra in the CU Art Museum's collection: the other is a 4th century B.C.E. example from Macedonia.