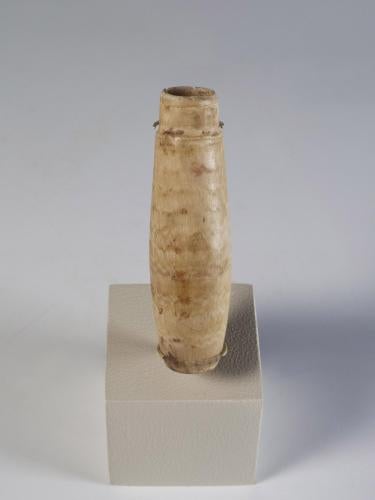 Comment: This vase was originally identified as Egyptian from the 1st millennium B.C.E. but was re-identified in 2017 as a 4th century B.C.E. Macedonian vessel by Dr. Sarah James.

The term 'alabaster' was used in antiquity to refer to travertine, a type of limestone formed by the chemical precipitation of water saturated with dissolved calcium carbonate. There are two varieties of travertine: calcerous tufa and calcareous sinter. The latter was used by the Egyptians to make stone vessels. In the 18th century C.E. the term was used to refer to a form of gypsum that resembled travertine and travertine was referred to as Egyptian alabaster or onyx marble, both of which terms are misleading.

Alabastra made of glass, constructed on the same motif as those of alabaster, were very numerous in Egypt and Syria throughout the 1st millennium B.C.E. and spread throughout the eastern Mediterranean.

This vessel is not actually glass, but alabaster.

The alabaster that this vessel is carved from is also called "calcareous sinter," a type of travertine. It is cream-grey in color. This stone can also be called "calcite," which simply refers to Egyptian alabaster, an abundant resource in Egypt's Eastern Desert (1). This material was commonly used by the Egyptian artisans to make stone vessels. This type of rock is formed by the chemical precipitation of water saturated with dissolved calcium carbonate.

Due to the availability of alabaster, Egyptians became masters of stone-carving. Alabaster is a soft stone that is easy to work into delicate shapes and polishes very well. When cut thin, it can be translucent. Alabaster decorative inlays and jewelry were found in the tomb of King Tutankhamun. The stone-vessel industry blossomed in the Nile Valley, not in the Eastern Desert, due to smaller and more accessible alabaster deposits. After the value of the stone was fully realized, Egyptians began transporting blocks of alabaster from the deserts to the valley. The stone-vessel industry peaked during the Egyptian Early Dynastic Period (2).

Properly dating this alabastron proved to be a challenge. It does not have any particularly distinguishing characteristics, such as a distinctive shape, lip, or decoration. Henry P. Colburn, who originally analyzed the Roman Glass collection, narrowed down the date of production to sometime in the first millennium B.C.E, based on the material and shape. A vessel with a similar silhouette appeared in a very early book by Sir W. M. Flinders Petrie, who is sometimes called the "father of modern archaeology." Petrie determined this alabastron shape to be from the Late Ptolemaic Period in Egypt, which is ca.the 2nd and 1st centuries B.C.E. (3), a determination based on the discovery of alabastra during his archaeological excavations.

In 2017, Dr. Sarah James re-identified the vessel as being a 4th century B.C.E. Macedonian production. A group of 21 stone alabastra, made of gypsum and not Egyptian veined alabaster, were found in Grave B in Derveni, located near Thessaloniki in northern Greece (4). The grave, which also yielded the famous Derveni Krater and the Derveni papyrus, dates probably to the 4th century B.C.E. Although the alabastra in this deposit are unlike the example in CU's collection, their presence attests to the popularity of stone vessels in Macedon at this time.

This is one of two stone alabastra in the CU Art Museum's collection: the other is a 6th century B.C.E. example from Anatolia.