Published: May 8, 2018 • By Jessika Akmenkalns and Debby Sneed 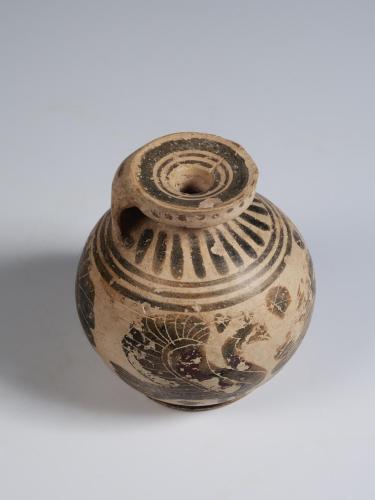 Description: Small round oil jar with a short neck, a small, flat mouth, and a relatively small handle connecting the mouth to the shoulder of the vessel. Multi-colored decoration covers most of the vessel, with a siren, a duck, and a griffin decorating the main frieze of the body. Details on the animals and other decorative elements are added by incision.

Additional photos of this vessel show details of the mouth, base, and decoration.

This vessel shape is called an aryballos (plural: aryballoi). Aryballoi functioned as oil jars and are associated with bathing by athletes in the gymnasion or palaestra. Because of its design, the aryballos could conveniently be carried on the wrist with a string or strap looped through the small handle (1). Athletes would adorn their bodies with oil before training and then, when the session was over, use a metal instrument called a strigil to scrape away dirt and excess oil from their bodies.

This particular vase was made and decorated in Corinth. The shape itself originated in Corinth (2) and is usually spherical or globular, as here. Some aryballoi, however, can be ovoid or pointed (3), and some are even molded into figural shapes. A well-known vessel, for example, the so-called Macmillan aryballos, has a mouth in the shape of a lion's head and gaping maw. The aryballos in the CU Art Museum's collection likely dates to the first half of the 6th century B.C.E. for several reasons. First, earlier vases tend to be more carefully painted (4). This vessel's decoration appears to have been done relatively hastily, suggesting 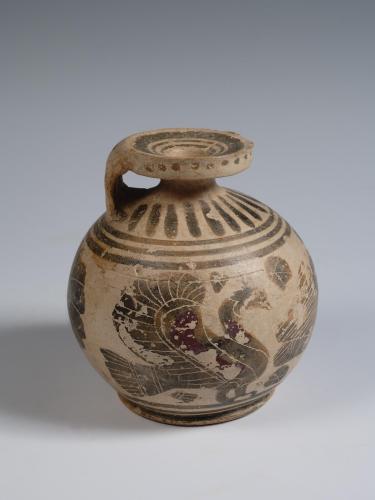 that it was produced later in the Corinthian period. Second, the composition of its decoration, sirens, suggests a later date: earlier Corinthian vases tended to be decorated with one large figure, while animal friezes and copious filling ornamentation were popular in later decoration (5).

Corinthian-style vases are characterized by their very fine yellowish or beige-colored clay as well as by their so-called Orientalizing decorative themes, which are derived from Near Eastern artistic motifs. Most typical of Orientalizing vases are floral decoration and, especially, horizontal registers with animal friezes. The animal frieze on this particular vase includes two sirens and a duck; these figures fill almost the entire horizontal space of the body, except for the area directly beneath the handle. One siren and the duck face toward the viewer's right, in the direction of the second siren, while the other siren faces toward the viewer's left and toward the first siren and the duck. The two sirens, though, are in a heraldic pose, facing each other with a duck between them; the heraldic pose is typical in Near Eastern representations of animals (6).

Also typical of Corinthian vase decoration are filler ornaments like rosettes. On this vase, a large rosette decorates the space below the handle, and several small but hastily drawn rosettes are spread among and around the animals. Although the decoration on this aryballos is primarily added with a black slip, Corinthian vase painters often made use of a variety of colors (7), including purple and red, which can be seen used on the animals' bodies on this vase.