The Orientalizing Period in Ancient Greece 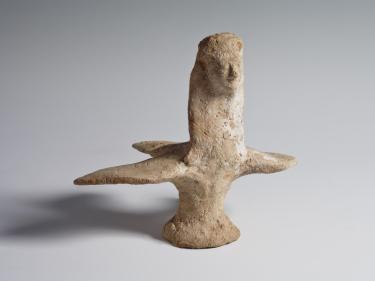 The Orientalizing period in Greece refers to a roughly 100-year period in which Greek art was greatly influenced by eastern, and specifically Near Eastern and Egyptian, ideas, myths, and decorative styles.

The Orientalizing Period lasted from about the mid-8th until the mid-7th centuries B.C.E. "Orientalizing" is a complex term that was coined in reference to the spread of Near Eastern and Egyptian ideas, motifs, and other cultural elements to Greece and the rest of the Mediterranean world. The term does not refer to the modern and derogatory use of the term "Oriental" to refer to the peoples and cultures of East Asia. Importantly for the study of Greek vases, the term refers to the adoption of Near Eastern and Egyptian themes into Greek art. Artistic elements, such as floral and animal motifs, spread with the movement of people, particularly with Greek and Phoenician traders (1). Greek vase decoration provides the most prolific examples in the archaeological record of the active assimilation of distinctive artistic elements from the east (2). Orientalizing decorative styles, however, were not spread primarily through Near Eastern pottery; rather, scholars turn to artifacts like Urartian metalworking, north Syrian relief sculptures, Assyrian relief sculpture and textiles, and Phoenician ivories and bronzes to determine the artistic relationship between Greece and its neighbors to the east (3).

Greek artisans appropriated floral, faunal, mythical, and mythological motifs from Near Eastern artistic media, which they selectively incorporated into their own crafts. Appropriated floral elements included rosettes, as well as palmettes and lotuses, which are represented in a chain on a dinos painted by Sophilos, the earliest Greek vase painter known to have signed his work. These elements are important because they represent themes that were indigenous to the Near East but uncommon in Greek art before this time. The Near Eastern scared tree, sometimes called the Tree of Life, is adopted on many Greek vases, although, arguably, in the Greek context it is used decoratively, without its eastern religious significance (4).

Representations of animals were prominent in Near Eastern art and the Greeks borrowed elements of animal imagery, as well. Appropriated faunal elements included lions, goats, water fowl, and panthers, all of which are pictured together on a bowl dated to c. 600 B.C.E., as well as bovines, boars, dogs, hens, and roosters. The animals were depicted in very stylized forms and the specific stylizations can often be traced to separate cultural regions of the Near East. Lions, for example, were depicted differently in Neo-Hittite and Assyrian cultures. The styles used to depict animals in Orientalizing Greek art, then, can sometimes hint at which specific Near Eastern civilizations the Greeks were in contact with.

Mythical creatures, including griffins, sirens, and sphinxes, are examples of Eastern hybridization of multiple beasts, often including elements of the human form. After the importation of these Near Eastern creatures, a new genre of beasts emerged as a popular form in Greek art. These hybrid creatures were incorporated into various aspects of Greek art: sirens and harpies, for example, could become attachments to tripod cauldrons.

Jeffrey Hurwit suggested that "Orientalizing art is Oriental on the surface but still recognizably Greek below" (5). What does this mean? Although it may seem from the above discussion that the Greeks indiscriminately absorbed all aspects of Near Eastern artistic culture at this time, this is decidedly not the case. As William A. Childs points out, "On the orthostats of Neo-Hittite sites, the Chimaera had no narrative context and served only to ward off evil, but in Greek myth the beast was to be conquered by a hero" (6). A Protocorinthian aryballos dated to 650-630 B.C.E., for example, shows Bellerophon riding on Pegasus, his winged horse, as they conquer the Chimaera, which has the head and body of a lion, the head of a goat on its back, and, often, a tail that ended in the head of a serpent. Greeks were fond of expressing narrative in their vase painting and they appropriated Near Eastern creatures like the Chimaera and the siren and altered their basic function by making them a part of a larger story.