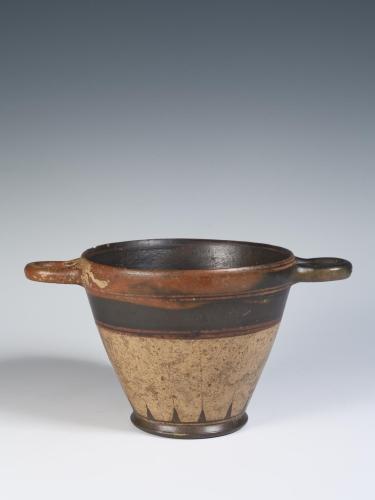 Description: Tall ceramic skyphos, with straight sides that taper down to a slightly narrower base. Large, open mouth, no lip, with two small handles, extending horizontally from just below mouth on opposite sides. Decorated in slip with a thick black horizontal band, misfired to red in places, covering the top third of the cup, including the handles. This thick black band is augmented by three sets of thin, red, parallel lines, horizontally placed, one along the mouth, one halfway down the band, one at the bottom of the band. The bottom two-thirds of the cup reserved in the color of the clay, with vertical black triangular rays emanating up from the base. The base of the cup is decorated in black slip.

A skyphos (plural: skyphoi) is a type of drinking cup in ancient Greece; such a cup is sometimes referred to as a kotyle (plural: kotylai). These deep drinking cups were used at banquets or drinking parties called symposia. Black-gloss skyphoi seem to have been the most popular form of drinking cup in ancient Greece (1), though several other shapes could be used, including two shapes represented in the CU Art Museum's collection, the wide-mouthed kylix and the high-handled kantharos. 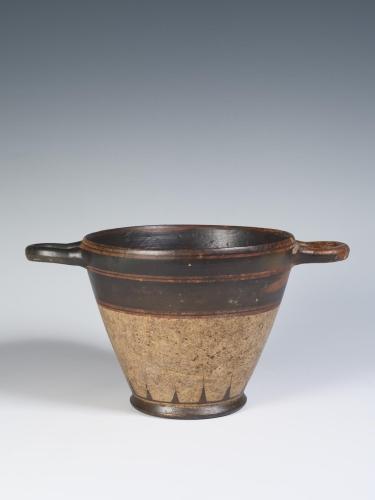 This particular skyphos probably dates to the second half of the 6th century B.C.E. (2). Its pale brown clay is similar to the clay sources in and around Corinth, though the clay appears to have a somewhat unusual composition. This cup, moreover, does not conform exactly to the typical Corinthian style. Its lip curves slightly inward and its body is relatively narrow and deep, while the typical Corinthian-style skyphos is characterized by an outward-curving lip and a body that is rather wider and shallower (3).

The decoration on this vase consists of a series of black and dark red bands in varying widths, which cover the top one-third of the cup, and a small ray pattern near the cup's base. Additionally, three concentric colored bands -- one red between two black -- decorate the underside of the base, which is typical for Corinthian skyphoi (4). The inside of the cup is entirely black, with the except of a single faint, thin red line near the rim and two others near the floor.

There are three basic types of skyphoi, the earliest of which is the Corinthian or lipped skyphos. True skyphoi date as early as the Geometric period in Greece, roughly 900 to 700 B.C.E., but it was in the 7th century B.C.E. that Corinthian potters first conventionalized the shape. It seems that skyphoi were popular in Corinth through the late 6th century B.C.E. (5). This particular skyphos has a shape more similar to later Attic skyphoi, suggesting that it may be slightly later in the production of skyphoi in Corinth.

The remaining two types of skyphoi, labeled the Type A skyphos and the Type B skyphos, emerged especially during the 6th and 5th centuries B.C.E., this time in Attica. These skyphoi are derived from the original Corinthian form, though they tend to be narrower and deeper. These Attic types reached their greatest popularity during the 5th century B.C.E. (6).

The original author of this article found no exact parallels for this skyphos. The closest examples include a cup in Würzburg (7) and one in Harvard's Fogg Museum (8). The cup's particular shape, decoration, and clay, however, do not conform to the most common varieties of Greek skyphoi, and the author suggested that the vessel may not be ancient, despite its discussion here as a 6th century B.C.E. Corinthian skyphos.