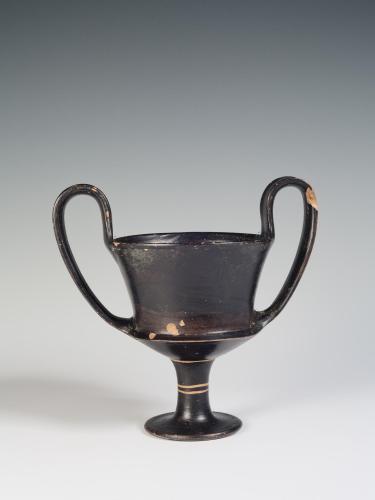 A kantharos is a type of cup in ancient Greece, with a deep bowl and two distinctive high handles. The stem of the cup is often tall, as it is on this example. This cup was originally identified as Boeotian but has been reclassed as Attic.

The shape dates as early as the 8th century B.C.E. and may have originated in the central Greek region of Boeotia (1). The Etruscans in central Italy produced bucchero kantharoi in the late 7th or early 6th century B.C.E. The shape was long-lived and the example in the CU Art Museum's collection dates to the mid-4th century B.C.E. (2). Its decoration is described as black gloss, a common decorative schema at 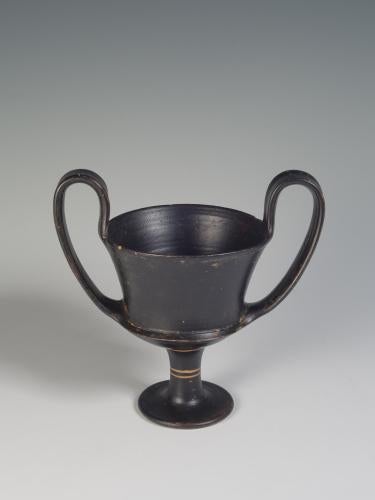 this time (3). A thin band is inscised or scratched into the black gloss at the junction of the cup's body and its stem, revealing the orange color of the clay beneath. Two additional thin bands, relatively close together, are incised in the middle of the stem. Finally, a ring of the orange clay is visible around the outer edge of the vessel's foot. The CU kantharos has been compared with a mid-5th century B.C.E. Boeotian kantharos at the Ure Museum at the University of Reading. Though the Reading cup bears figural decoration, it has a similar shape.

There are several different types of kantharoi. The CU kantharos is identified as a Type A Kantharos, a type characterized by a high stemmed foot; tall, straight sides; and tall handles that rise above the lip (4). On this and other Type A Kantharoi, a high step marks the transition between the vertical sides and the stem. This step corresponds to an undercut lip on the interior of the cup, which leads to the shallow, curved base on the interior of the bowl. The transition between the exterior step and the handles is smooth.

Kantharoi were cups used to hold wine, possibly for drinking, though they could instead have served for ritual purposes or as an offering or votive. The kantharos seems to be an attribute of Dionysus, the god of wine (5), who can be seen holding one in the tondo of an early 5th century B.C.E. kylix at the Museum of Fine Arts in Boston. The connection between Dionysus and the kantharos was widespread and appeared in a variety of media, including on a late 5th century B.C.E. silver coin from Cilicia in Asia Minor (6). Likewise, Dionysus's companions, including Satyrs and Maenads, were commonly portrayed on Greek vases holding a kantharos (7). Scenes of Dionysus, Satyrs, and Maenads revelling and often holding kantharoi recall the ancient Greek symposium and, indeed, such scenes often appear on sympotic vessels, including kraters and kylikes. Despite this fact, however, the kantharos may not be a banqueting cup, but rather a vessel used in cult as a symbol of rebirth or of the immortality offered by wine, "removing in moments of ecstacy the burden of self-consciousness and elevating man to the rank of deity" (8). The kantharos is depicted in scenes that may be related to funerary cult, as on a 6th century B.C.E. marble relief from Laconia (9).