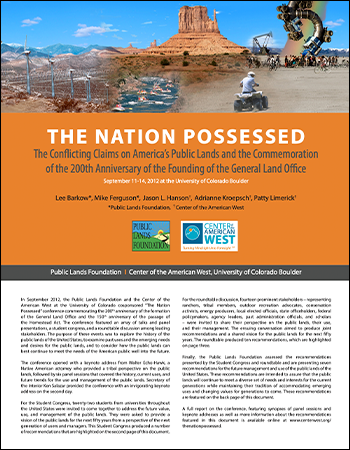 The Nation Possessed: The Conflicting Claims on America's Public Lands and the Commemoration of the 200th Anniversary of the Founding of the General Land Office

In September 2012, the Center of the American West, the Bureau of Land Management, and the Public Lands Foundation hosted an event entitled “The Nation Possessed: The Conflicting Claims on America’s Public Lands,” which commemorated the bicentennial of the founding of the General Land Office and the 150th anniversary of the passage of the Homestead Act. The conference brought together scores of thinkers, scholars, stakeholders, and citizens (young and old), and asked them to reckon with the dramatic history of the federal government’s management of the public domain.

Every day, thousands of Americans move through a landscape that reflects the long-term impact of the work of the General Land Office, even though they would not recognize its name. Especially in the American West, much of the public domain remains under federal ownership and management, configured as National Parks, National Forests, National Wildlife Refuges, National Wilderness Areas, and the BLM’s National System of Public Lands. The resources of the public domain have made, and continue to make, an unmistakable contribution to our national identity, well-being, prosperity, and power.

This conference wrestled with the meaning of public lands and asked its participants to help form guiding principles that reflect the tradition of public lands and also help to shape the future role public lands will play in American life. Herein, you will find the results of those efforts, including recommendations from students, suggestions from public officials, observations of scholars, and much more. The discussions from the conference were compiled into a longer report titled The Nation Possessed: The Conflicting Claims on America's Public Lands and the Commemoration of the 200th Anniversary of the Founding of the General Land Office  as well as a condensed version titled The Nation Possessed: Condensed Report.

About the Center of the American West: A hub for scholarship, public outreach, and education about the American West based at the University of Colorado Boulder, the Center of the American West serves as a forum committed to the civil, respectful, and problem-solving exploration of important and often contentious public issues. In an era of political polarization and contention, the Center strives to bring out “the better angels of our nature” by appealing to our common loyalties and hopes as Westerners. Authors Patty Limerick, Jason L. Hanson, Adrianne Kroepsch, and Kurt Gutjahr are affiliated with the Center.