Professor of Piano Pedagogy Alejandro Cremaschi and his students are uncovering a neglected group of composers rarely visible in the world of classical piano music. Their new project, “Hidden Voices” explores the performance and pedagogical potential of piano compositions from 19th and 20th century African American women composers whose music is preserved in the Helen Walker-Hill Collection at the American Music Research Center on the CU Boulder campus.  Funded by an Undergraduate Research Opportunity Program (UROP) Award, this student-driven project reflects on the importance and impact of diverse voices, cultures, and social environments among classical piano artists and aspires to bring their music to light within the CU community and beyond.

Students are illuminating the work of these marginalized composers by researching, analyzing, and recording their music from primary source materials found in the collection and posting performance videos and articles about the composers on the project’s Wiki site.  Researchers Reina Krumvieda, Indigo Farmer, Anastasiia Pavlenko, and Boheng Wang, pictured below, are among the first College of Music piano students to work on Hidden Voices. 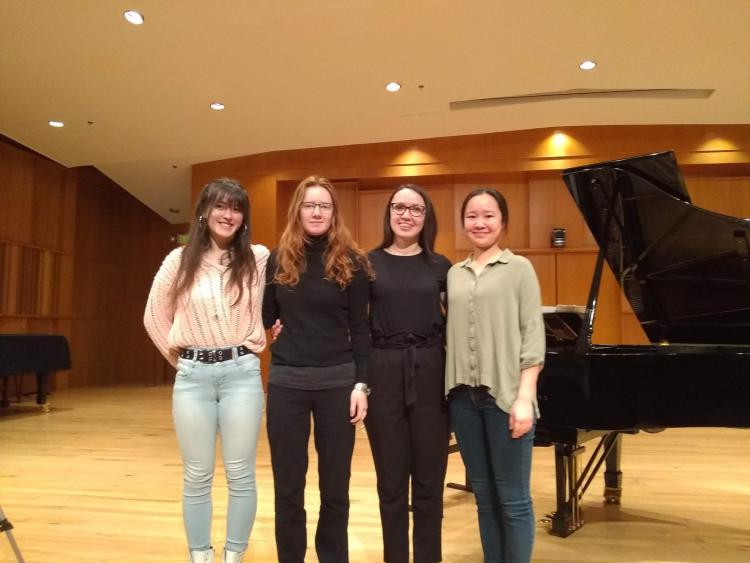 “I liked working with primary source materials, but it was challenging not to have other peoples' interpretations to rely on,” said Indigo Farmer, who helped launch the project. “Having only the primary source forces you to be creative and interpret things yourself, and that means that sometimes you are inaccurate.  It was a challenge to read the music, some of it was handwritten, and the tonal language of my composer, Lettie Beckon Alston, was unfamiliar to me. It was a great experience to become familiar with another composer's style.”

Students first heard the music by sight-reading scores on a traveling digital keyboard and headphones placed inside Norlin Library’s Special Collections Reading Room, a quiet space where collection materials--like these compositions and manuscripts--are accessible to anyone.

Anastasiia Povlenko reflected, “Going through compositions, realizing that I am one of a few people who had a chance to take a close look at them, and analyzing those compositions to raise awareness of their existence for others has definitely given me goosebumps a couple of times.”  And, Boheng Wang expressed, “I have learned a lot about analyzing music from a pedagogical perspective and figuring out what the composer might want to express through the music based on their background.”

“As a mixed-race woman it was very meaningful to learn more in depth about fellow minority female composers and pianists,“ notes Reina Krumveida, whose Hidden Voices research was featured in the Persevering Legacy Concert earlier this year. “I was able to learn about their life experiences in detail, some of which I could relate to as a result of my own experiences as a woman minority.” 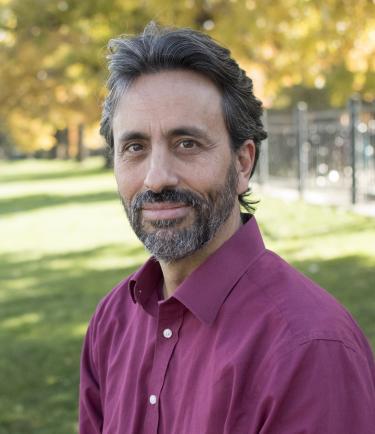 Professor Cremeschi, pictured right, indicated that the project has barely scratched the surface in understanding how racial issues are present in the lives of these composers.

He explained, “Zenobia Powell Perry, for example, was involved in the civil rights movement, and, as a young girl she met Booker T. Washington and befriended Eleanor Roosevelt.  And, there’s Undine Smith Moore, who composed the Cantata, 'Scenes from the Life of a Martyr' in honor of Martin Luther King Jr.  Some of these musicians stood up against being labeled simplistically.  You have Undine Moore, for example, who said ‘black music is a house of many mansions.  Blacks have many musics and some of them relate in an extremely universal way to the human condition.’"

"Others felt their gender and skin color often created preconceptions; for example, Eleanor Alberga, when asked [to describe] her greatest frustration or challenge during an interview, said ‘two things: issues of race and gender in as much as they have defined me in the minds of others,’” added Cremaschi.

Hidden Voices contributors hope that pianists and teachers everywhere will learn about these compositions and start teaching and performing them.