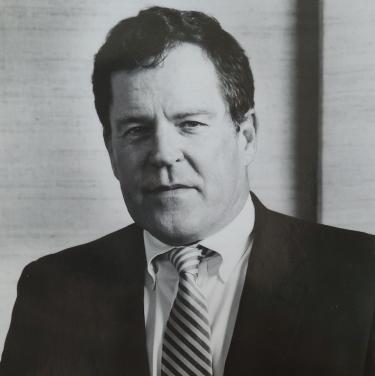 Woodhull’s involvement with the U.S. Armed Forces was a theme throughout his career, as he would find success in the private sector, serving as president and CEO of defense sector heavyweight, Logicon, Inc. Jack held this position from 1969 until 1998 when Northrop Grumman merged with Logicon, a billion-dollar acquisition when adjusted for inflation. Logicon was a leader in providing advanced technology systems, hardware, software, and other services to the Department of Defense, the Navy, the Air Force, the Department of Justice, and other government agencies.

Woodhull’s involvement with the University of Colorado, and especially the Applied Math Department, did not end upon his graduation. He was an active member of the CU community, serving on the University of Colorado Foundation Board of Directors and the Engineering Advisory Council.  In fact, he was Chairman of the Engineering and Applied Science College’s Centennial Campaign that raised over $57.5 million dollars in the early 1990s.

Of particular note was that Jack spearheaded an investment in the newly created Applied Mathematics program on the Boulder campus. He created an endowment fund that survives to this day as the J.R. Woodhull/Logicon Teaching Professorship, the first of its kind on the Boulder Campus.  Dr. Anne Dougherty is the current teaching professor, and Professor Jim Curry held the position from 1999 to 2012. The purpose of the professorship is to support undergraduate applied mathematics education, as Jack believed that engineering students would be best prepared with dedicated applied mathematics education that addressed real world problems that would be supplementary to a student’s engineering education.

Professor Curry, in a statement made about his tenure as APPM Department Chair explained and Woodhull’s visionary investment in the undergraduate education of engineers:

“Each year I wrote a summary of the department's accomplishments and the ones I remember were to accelerate undergraduate research opportunities, with the help of a major grant from the National Science Foundation and helping to raise the ranking of the Department in the National Academies of Sciences ranking of Applied Mathematics department. I attribute these foundational accomplishments and transformation to the strong support of Mr. "Jack" Woodhull and especially his love and support of future generations of engineering student's excellence.”

Professor Curry continued on, explaining that Woodhull was “adamant about supporting undergraduate students,” and that the J.R. Woodhull/Logicon Teaching Professorship was instrumental in pushing the department and the students forward -- “Jack Woodhull nudged the department in the direction of student excellence … [his] insights and gift to CU Boulder continue to transform the future!”

The Department mourns the passing of a strong and impactful member of the CU family who was a major contributor in the history of Applied Mathematics and whose generosity survives to this day. His legacy will live on for the students who benefit from his vision.  More information about the life and successes of Jack Woodhull can be found in his obituary.