In Memory of Peter Teets 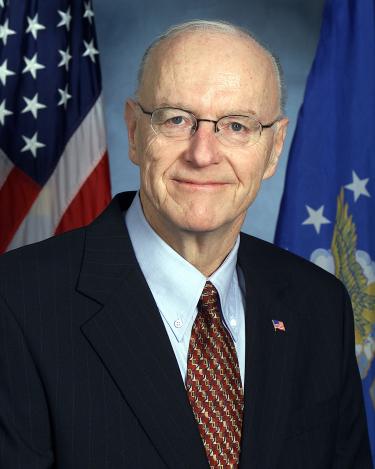 In November, the University of Colorado lost Peter Teets, a distinguished alumnus of the original Applied Mathematics department on the Boulder campus. Teets graduated in 1963 with a Bachelor of Science degree in applied mathematics and two years later, a Master of Science degree, also in applied mathematics, from the Denver campus. In 1978, he attended Massachusetts Institute of Technology and earned a second master’s degree in management.

By the time he graduated from MIT, Teets had already risen from engineer to manager and then to director of space systems at Martin Marietta in Denver. In 1985, Teets became president of Martin Marietta Denver Aerospace. In 1997, when Martin Marietta merged with Lockheed Corporation to form Lockheed Martin, Teets was selected as chief operating officer of the newly named industry icon.

He left the private sector in 2001 when President George W. Bush appointed him as director of the National Reconnaissance Office. He then served at the Pentagon as undersecretary of the Air Force for four years. During his time in the Bush administration, Teets pioneered “a comprehensive national security space enterprise, laying the groundwork for the integration of open and classified space activities in support of national security objectives,” according to the National Reconnaissance Office. “He greatly improved the acquisition, operation, and effectiveness of national security space capabilities.”

Throughout his accomplished career, Teets accrued significant honors and recognition reflecting his dedication to his work and the impact he had in his field. Among the many impressive awards he received was the W. Stuart Symington Award, given to civilians with significant contributions to national defense.

Teets was inducted into the Colorado Space Heroes Hall of Fame in 2016, which was created to “celebrate those who have contributed most significantly to the development and success of Colorado’s space economy, and highlight Colorado’s leading role in all things space.” In 1990, the University of Colorado awarded him an honorary Doctor of Science degree.

Teets remained strongly connected to his alma mater over the years, serving as a member of the  College of Engineering and Applied Science’s Engineering Advisory Council in the 1980s and early 1990s. His advocacy for a renewed engineering focus on math led to the launch of the Applied Mathematics program in 1989, which went on to become a full department.

“Pete spoke often of the value of his applied mathematics degree as he navigated both his engineering-related positions and his leadership roles,” said Enid Ablowitz, who was the director of development for the College of Engineering while Teets served on the EAC and remains close with the Teets family. “He was an articulate advocate for the return, growth and importance of an applied mathematics department and was particularly vocal about how his applied math education was foundational to his career successes. Often he would say that his broad understanding of engineering through the interdisciplinary lens of applied mathematics was a unique perspective and a powerful asset.”

Not only did Teets help reintroduce applied mathematics to CU Boulder, but he also contributed to boosting recognition of the department on campus. In the 2000s, Teets gave the yearly Applied Mathematics Distinguished Lecture that James Curry, the department chair at the time, described as a “very positive presentation. APPM made every effort to impress,” which incentivized the chancellor to speak at the same event. Having the chancellor speak “helped put Applied Mathematics on the campus map,” Curry said.

Teets impacted the Applied Math department in deep and enduring ways, helping it become the department it is today. The students, faculty and staff of the department mourn the loss of Peter Teets and are profoundly appreciative of the contributions he made to Applied Mathematics, to CU, to the nation and to the world.

“Applied Mathematics has been fortunate to have interactions with students like Mr. Peter Teets,” Curry said. “He helped transform the future.”