Earlier this August, Anne Dougherty was presented with the Doug Faires award during the Mathematical Association of America’s (MCM) annual meeting- the 2018 MathFest. She received this award for her years of dedicated participation, recruitment, and coaching of teams in the MCM/ICM contest.

The Doug Faires award is presented by COMAP, and according to their press release, it’s meant to recognize advisors’ efforts to start modeling teams, and to encourage current advisors to recruit and mentor new advisors. COMAP hopes the presentation of these awards will promote the formation of local groups with an interest in mathematical modeling.

Anne Dougherty has been with the CU Applied Math Department since 1994, and currently serves as a Senior Instructor and the department’s Associate Chair. She “particularly enjoys working with undergraduate students and watching them grow and develop.” Throughout the courses she’s taught, she has always tried to provide her students with the motivation and desire to think for themselves. As such, Dougherty has been a strong advocate for student participation in the MCM/ICM for over twenty years. According to Anne, “the spirit of MCM/ICM resonates with my own beliefs on what constitutes a strong undergraduate Applied Math education, and I would love to see more participants.”

Over the years, other CU faculty have joined Anne in her efforts to recruit MCM/ICM participants and train the teams. Professors Bengt Fornberg and Manuel Lladser have worked with various teams to help them prepare for the contest. Every year before the MCM/ICM contest, there are 4-6 training sessions in which the rules and main steps (e.g. picking a problem, the process of solving it, etc) of the contest are reviewed. Additionally, Professor Scot Douglass, the Director of the Engineering Honors Program, has been instrumental in recruiting students from a wide variety of majors and STEM disciplines. Over time, they have found that the strongest teams are comprised of students from different majors and with different interests and skills. Given everyone’s combined effort, CU Boulder’s participation in the MCM/ICM contest has increased from 3-5 teams to over 15 teams in just the past few years.

The participating teams have continually found their participation in the contest both challenging and rewarding. The MCM/ICM is an intense compressed research project in which students are required to selected a problem, research its history, create mathematical and numerical models of the problem, analyze the sensitivity of their results, and then write a written report- in only four days. The collaborative nature of the contest allows the participating students to present a final product which is usually superior to that which would have been produced by the students working individually.

Anne thoroughly enjoys working with the students on all aspects of contest preparation; according to her, “when I first learned about the MCM/ICM, I thought this was a perfect venue for our students to showcase their mathematical, computational, and communication skills.” Dougherty believes that the current tradition of excellence in the MCM/ICM is due to the university having “some of the best students in the world” who are then well trained through rigorous coursework.

Below you can see Anne and this years MCM Outstanding Team at MathFest2018. From left to right: Marc Thomson, Christine Reilly, Anne Dougherty, Derek Gorthy, and the President-elect of the MAA. 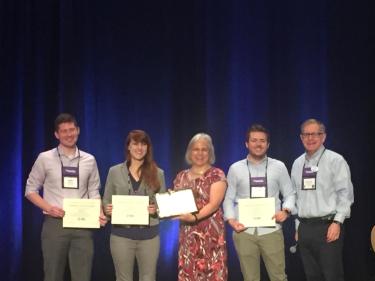