We are primarily focused on the processes controlling hydrologic fluxes in cold regions and within the greater Earth system. Improved understanding of these processes is essential for sustainable management of natural resources and for making informed environmental policy decisions.

Learn about the Mountain Hydrology Group 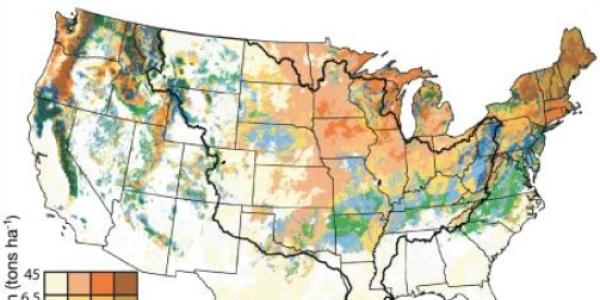 As winters warm, nutrient pollution threatens 40% of U.S. (U Vermont) 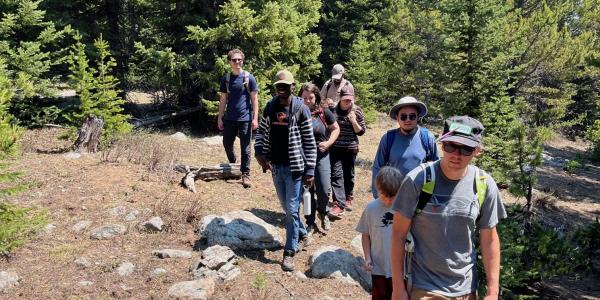 A convergence research project is uniting land managers, local residents, and scientists to jointly understand how Colorado Front Range ecosystems and public lands are responding to pressures from people and climate change. END_OF_DOCUMENT_TOKEN_TO_BE_REPLACED 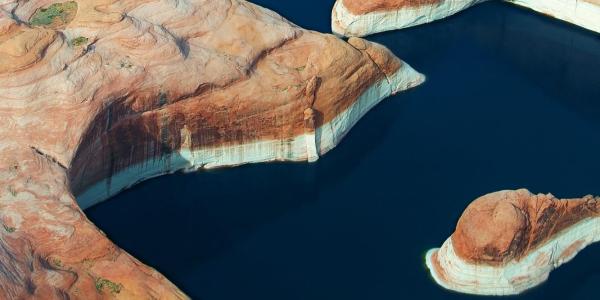 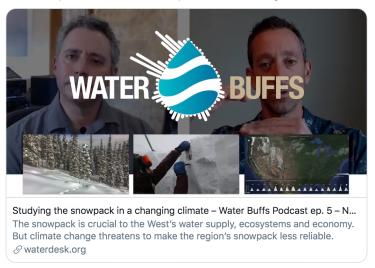 October 28, 2020.   An interesting and in-depth look at snowpack as it relates to water in the west by our very own CWEST and Mountain Hydrology Group director Noah Molotch. From the Water Desk podcast page:  The snowpack is crucial to the West’s water supply, ecosystems and economy. But climate change threatens to make the region’s snowpack thinner and less reliable. We talk to a leading snowpack researcher about how scientists are analyzing the past, present and future of the West’s snow. Water Desk Director Mitch Tobin talks to Noah Molotch, Director of the Center for Water Earth Science & Technology (CWEST) at the University of Colorado Boulder, about the importance of snow to our water supply and what the future may hold for the American West’s snowpack. 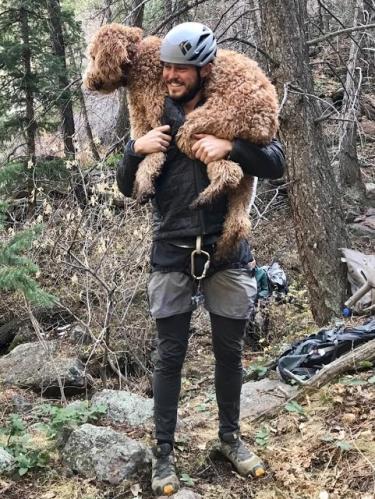 August 17, 2020.   We are pleased to welcome our newest member to the Mountain Hydrology Group, Eric Kennedy. Eric is an incoming MA student in the Geography program. His current research focuses on the impacts of changing snowmelt patterns on forest ecosystem processes with the goal of improving understanding of mountainous areas' vulnerability to climate change. Eric's research is motivated by previous work as a wildland firefighter and ski patroller in the Pacific Northwest and his avid mountain recreation habit. 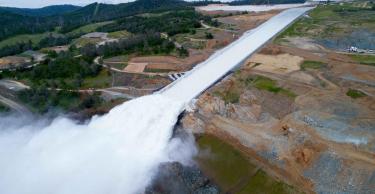 July 23, 2020.  "We know that climate change is expected to increase the intensity of storm events in the Sierra Nevada, including extreme melt of deep mountain snowpack,” said Mountain Hydrology Group co-author Keith Musselman. “With our Oroville Dam case study, we highlight an example of potential threats to public safety and infrastructure associated with a warmer and more variable climate". A new paper analyzes the factors behind the February 2017 Oroville Dam spillways incident in California. The lead author, Brian Henn a former researcher at the Center for Western Weather and Water Extremes (CW3E) at Scripps Institution of Oceanography at the University of California San Diego put together a research team consisting of Keith Musselman, Leanne Lestak and Noah Molotch from the Mountain Hydrology group here at INSTAAR, and F. Martin Ralph director of the CW3E. The press release by Robert Monroe from Scripps News states that "Heavy snowmelt [from a series of atmospheric rivers] delivered a surge of runoff to Feather River and Lake Oroville". To read more about the research visit the press release and the paper.

Snow Cover in the Sierra Nevada 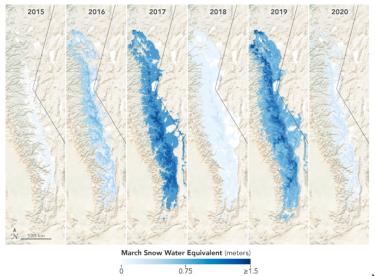 March 16, 2020.   Our regression modeled SWE estimates for the Sierra Nevada were used for the NASA Image of the Day. The winter of 2019-2020 brought a range of extreme weather to the mid-latitudes of the Northern Hemisphere, with some areas receiving a deluge of moisture and others staying much drier than usual. California experienced the latter, as evidenced by the thin snowpack in the Sierra Nevada near the start of spring. Snow-covered areas, as seen in natural-color satellite imagery, make for an interesting visual, but such imagery does not tell a complete story because it does not account for the depth or density of the snow. A more meaningful indicator of the quality of the snowpack is snow-water equivalent—an estimate of how much water you would get if all of the snow melted at once. The maps (left) show snow-water equivalents across the Sierra Nevada in early March for each year between 2015 and 2020. Data for the maps, developed by the University of Colorado’s Center for Water, Earth Science, and Technology, are derived from ground-based data, computer models, and satellite imagery. They incorporate a data set from the Jet Propulsion Laboratory (JPL)  called the MODIS Snow Covered Area and Grain-size (MODSCAG), which uses data from NASA’s Terra satellite to determine properties of the snow —- things like the area covered, grain size, and albedo —- that are useful for deriving accurate estimates of snow-water equivalent. 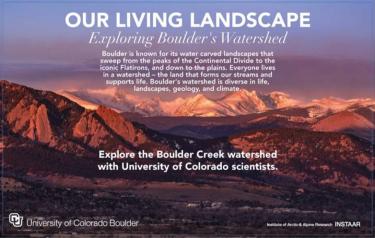 January 13, 2020.   We are excited to announce our opening of the educational exhibit "Our Living Landscape: Exploring Boulder's Watershed." The exhibit is at the Museum of Boulder from January 31st to March 31st, 2020. Come join us for an evening of celebration at the Open Reception (free to the public) Friday, January 31st, from 5:30 – 7:30 pm!

The Boulder Creek watershed exhibit is a collaboration between INSTAAR’s Boulder Creek Critical Zone Observatory, Niwot Ridge Long-term Ecological Research program, Center for Water Earth Science and Technology, and many partners including Boulder County Parks & Open Space, City of Boulder, United States Geological Survey, and more. It shares what we’ve discovered about the land, plants, animals, water, and climate of the place we all call home, over the course of decades of research in the watershed, with the community.

This exhibit was funded by the University of Colorado’s Office of Outreach and Engagement. In-kind contributions were provided by INSTAAR, BcCZO, NWT LTER, CWEST, CU Mountain Research Station, and the City of Boulder.