We are focused on investigating how vegetation processes affect water flow dynamics and pathways in soil and streams, and conversely, how water flow paths affect vegetation function in mountainous terrain.

Learn about the Ecohydrology Lab     See INSTAAR news about Barnard

Katarena Matos joined the lab as a new PhD student in Fall 2021.  Katarena is working with the Dynamic Water Critical Zone Cluster. We are excited about the wealth of expertise in hillslope hydrology that Katarena brings to the group.

Dr. Barnard won an Excellence Award from the Boulder Faculty Assembly, recognizing her outstanding work and effort to make advances in the academy.  More specifically, she was one of just three recipients across campus to win the Excellence in Leadership & Service award (2020-2021).  Separately, she was also recognized by the Diversity Committee of the Arts and Sciences Council for her efforts to increase diversity and inclusion. Students, staff and faculty received the first such awards from ASCEND, the Arts and Sciences Consortium of Committees on Climate, Equity, Inclusion and Diversity.

Andrew Birch is rocking the hydrology journals with two new publications that go together like chocolate and peanut butter:

"The influence of land cover and storm magnitude on hydrologic flowpath activation and runoff generation in steep tropical catchments of central Panama" is accepted in Journal of Hydrology (Birch, Bush, and Barnard co-authors).

Andrew begins his new career with the National Park Service as one of the water quality leads! Amazing job for an amazing guy. 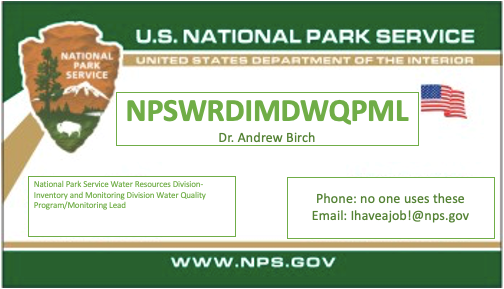 The project focuses on the role of subsurface water storage in driving Earth surface processes. Read the CU Boulder Today story about the new cluster.

Ethan joined the lab as a new MA student in Geography.

Andrew successsfully defended his PhD on May 8th, 2020 via Zoom. 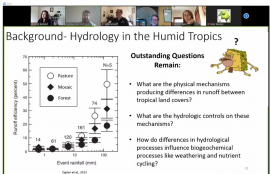 Best Acting by an Adult award from Earth Explorers

Congratulations to Hallie Adams and welcome back!!

Hallie Adams was awarded a NSF Graduate Research Fellowship and has returned to the lab to pursue a PhD after earning her Masters in 2014. Read Hallie's story in CU Boulder Today.

Holly returns from her term as NSF Program Officer 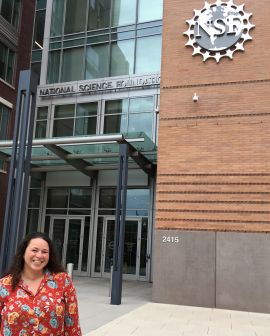 Holly was the Program Officer for the Hydrologic Sciences Program at the National Science Foundation. Read about her experience  in the AGU Hydrology Section Newsletter - see page 11 in the PDF.

Isaac successfully defended his MA thesis titled: Hydrologic flowpaths in foothill catchments of the Colorado Front Range on May 17, 2019

She has been accepted to the University of Utah Isocamp.

Kamini will be highlighting some of our transpiration-groundwater interaction results at select locations.

Congrats on her new position at the UC Berkeley Biometeorology Lab! We miss you.

Scott Allen's manuscript, "The role of stable isotopes in understanding rainfall interception processes: a review," has been accepted for publication in WIREs Water (Barnard co-author). 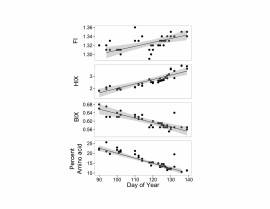 Andrew Birch will be joining the Geography Department this summer as a Ph.D student. His research will focus on how land use influences water residence time and subsurface flowpaths in a Panama Canal watershed. 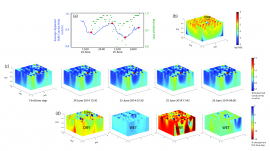 November 7, 2015: Holly Barnard gave an invited talk at the University of Idaho

Spoke at the Department of Forest, Rangeland, and Fire Sciences and visited with Dr. Tara Hudiburg's lab.

Spoke at the University of Vermont's Rubenstein School of Environment and Natural Resources and visited with Dr. Carol Adair's lab.

Daphne Szutu has joined the lab and INSTAAR where she will be leading field activities for our project in Oregon and managing the lab.

June 3, 2015: Hallie Adams will give presentation to Boulder data geeks

She will present her Ecosphere paper to the Analyze Boulder community of 2000+ data practitioners at their monthly meeting.

Sidney Bush will be joining the Geography Department this summer as an M.A. student and her research will focus on hillslope infiltration in Panama.

John Knowles' manuscript, "The relative contributions of alpine and subalpine ecosystems to the water balance of a mountainous, headwater catchment," has been accepted for publication in Hydrological Processes (Barnard co-author).

Rachel Gabor's manuscript, "Influence of leaching solution and catchment location on the fluorescence of water-soluble organic matter", has been accepted for publication in Environmental Science and Technology (Barnard and Burns co-authors). 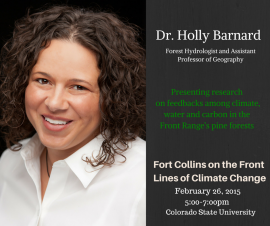 Holly Barnard is an invited panelist for this event at Colorado State University. The event will kickoff with a special screening of the newly released short film, “Unacceptable Risk: Firefighters on the Front Lines of Climate Change,” and a panel of local community members and experts to discuss local climate impacts in Fort Collins, followed by a climate action workshop.

Holly Barnard and Kamini Singha (Colorado School of Mines) have been awarded a new grant titled:  "Collaborative Research: From Roots to Rock - Linking Evapotranspiration and Groundwater Fluxes in the Critical Zone." This project addresses a critical knowledge gap in how water storage mediates the connection between evapotranspiration and groundwater dynamics, at the HJ Andrews Experimental Forest Long-term Ecological Research site in Oregon. The project goal is to mechanistically identify the interconnections between ET, groundwater fluxes, and discharge and to determine how these connections vary throughout the seasonal baseflow recession.

She started with FB Environmental Associates in Maine and New Hampshire.

Erin Berryman's (now with the USGS) manuscript: Complex terrain alters temperature and moisture limitations of forest soil respiration across a semi-arid to subalpine gradient, has been accepted for publication in Journal of Geophysical Research - Biogeosciences. (Barnard, Adams, and Burns co-authors)

She started with the City of Fort Collins Utilities where she works to engage the community in resource conservation efforts and environmental stewardship through energy and water conservation education.

She begins with the USGS Geosciences and Environmental Change Science Center in Lakewood, Colorado.

Both are CU-Boulder Geography graduates.  They will be missed dearly in the lab! 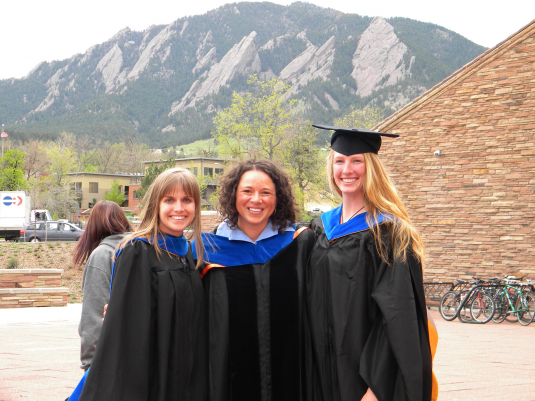