What I Did With My EMP Degree: Aerospace Engineer 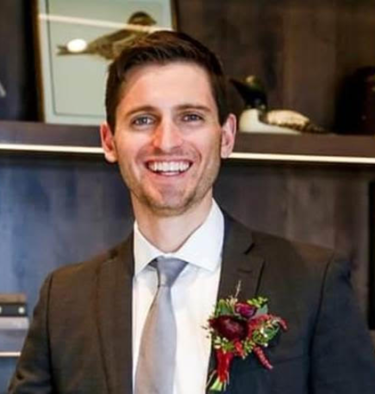 The sky is no longer the limit for engineers with the right degree under their belts. With a bachelor’s in aerospace engineering, Josh Lawrence's career was already taking off at Lockheed Martin, where he successfully landed his first job out of college as a systems engineer at its satellite operations facility in Colorado. However, after graduating from CU Boulder’s Master of Engineering in Engineering Management Program (EMP), Lawrence’s career as an aerospace engineer reached a much higher orbit.

“We do ground software and hardware for everything needed to command and control certain satellites,” says Lawrence. “My program specifically works on satellites for which the primary use is detecting heat signals for missile warning systems.”

While certain aspects of Lawrence’s job require security clearance, he can talk about it at a high level.

“The team I'm currently part of does what we call ‘mission processing,’” says Lawrence. “This is where applied mathematics and software come together to get the telemetry from the spacecraft so the operator can see the infrared signatures on a globe that could potentially be missiles. So it's a little bit of a unique domain."

Lawrence may have found his niche as an aerospace engineer working on government and military projects, but the space industry is certainly not a niche industry.

“I think I always wanted to work in the space industry,” says Lawrence. “It wasn't until I started at Lockheed that I realized how many different space programs there are in both military and civilian fields.”

Taking the Next Step with an Engineering Management Degree

After two years of working as an individual contributor at Lockheed Martin, Lawrence set his sights on a management position within the company. But, as one of many ambitious engineers in the aerospace industry, Lawrence knew that this would mean going back to school.

“I wanted to continue with my education and do a master’s degree,” says Lawrence. “I wasn't sure if I wanted to do an MBA, which is more business orientated, or a systems engineering degree, which is a little bit more technical. Both had their cons because they would have channeled me in one direction or the other. I didn’t want to pigeonhole myself into either a technical or business-orientated degree.”

Lawrence found the solution to his problem in the Master of Engineering in Engineering Management Program at CU Boulder.

“When I found the engineering management Program at CU, I was pleasantly surprised because it seemed like a perfect opportunity for me,” says Lawrence. “I didn't feel like I was pigeonholing myself into a certain direction with my career. I thought I could take that degree and still have the flexibility to take different routes.”

According to Lawrence, once he started looking deeper into the Program, a number of additional benefits jumped out at him.

CU Boulder was conveniently located close to where Lawrence lived and worked, meaning he could attend some of his classes on campus.

“It's a beautiful campus,” says Lawrence. “You go to CU Boulder, and immediately there are great views of the Flatirons rock formations. Then there’s the architecture. I thought that was all fantastic.”

Another plus was the flexibility afforded by the availability of online classes, which helped Lawrence balance his studies around his professional and personal life.

“The ability to take some of my classes online was fantastic,” says Lawrence. “I still had homework due on a weekly basis, but I could study when it was convenient for me. The lectures were recorded and made available online. It was a very friendly and easy-to-use interface, and I felt like I was learning just as much online as I was in person. As a software engineer, my life was already online, so it was a straightforward transition for me.”

However, it was the quality of the faculty at CU Boulder that sealed the deal for Lawrence.

“I started looking at the resumes of some of the lecturers in the Program,” says Lawrence. “It seemed like the Program had a lot of people who had ties to NASA. There were also a lot of successful business owners who had transitioned into academia later in life. I just thought that hearing from those people rather than somebody who grew up focused on academia their entire career would offer a different perspective. I think that's what really attracted me to the Program.”

Lawrence already knew he was going to get a lot out of the Program’s project engineering and systems engineering courses. However, there were several other courses in the Program that Lawrence particularly found useful and which went beyond the typical requirements to be an aerospace engineer.

“Reflecting on the Program, there were two courses that surprised me and left a really big impression on me," says Lawrence. "There was a marketing course that helped me think about problems from the customer’s perspective. The marketing course also taught me how to become a better communicator. I think that really helped me to become a better advocate and sell my ideas and objectives to my team at work.”

Lawrence also highlighted the finance for engineering managers course as incredibly valuable to his career development.

“Finance for engineering managers was fantastic because that really helped develop my business IQ," says Lawrence. "Now, when I'm involved in more technical problems, I'll also be thinking about the business objectives. So that has really influenced a lot of the decisions that I have made in a good way. Also, just being able to have more business language fluency when I'm talking with people in finance has really been beneficial to me.”

Lawrence is conscious of the fact that although his clients are primarily government and military organizations, his team still has to offer value for money and remain competitive.

“We have a number of competitors out there, so we still have to put together cost estimates and submit proposals to the government,” says Lawrence. “We still have budgets that we have to keep under, and we are continually providing earned value reports for the programs we work on to the government. So even though the customer is the military or the government, we still deal with budgets just like you would in private industry.”

Work/Life/Study — Getting Down to Business

Lawrence graduated from the master’s Program after three years of study.

“It was certainly challenging,” says Lawrence. “I was working full-time and doing the courses in the evenings. I was also dedicating one day of my weekend each week to doing homework.”

Despite dedicating so much of his time outside of work hours to the Program, Lawrence didn’t feel the pace was too arduous.

“It didn't feel like just busywork,” says Lawrence. “I always felt like the faculty did a great job bringing in guest speakers and lecturers, and that got people engaged. I was constantly learning about new topics and I never felt like I was dreading going into class. It was like switching my brain into a new mode and learning about something new, which I enjoyed."

Lawrence, who recently became a father for the first time, jokes that he didn’t have much spare time when he was studying for his master’s degree, but having a baby is a lot more difficult.

“Before kids, it was pretty sustainable to study for my master’s degree while going to work for 40-hours a week and still have a life outside,” says Lawrence. “I certainly didn't have a lot of time after all that, but the balance wasn't too bad.”

While Lawrence didn’t have a particular career move in mind when he joined the Engineering Management Program, he believes the skills he developed were instrumental in his promotion to a management position at Lockheed Martin.

“It’s not like I showed them my degree and I all of a sudden got promoted,” says Lawrence. “However, it was clear to my employers that I was leveraging the things that I learned in my coursework and adding more value to my work at the company.”

Lawrence highlights the skills he learned in his systems engineering classes as being particularly beneficial to his employer.

“I learned about how more efficient processes worked and I was able to apply that to my job,” says Lawrence. “That helped me to modify some processes I used at work, which helped reduce risk and just be more efficient. I also tried to focus on my newly developed communication skills. Simple, clear and consistent communication is just so important for engineering teams working on complex systems."

"About a year after I got my master's degree, my managers started to think, 'Maybe we should put Josh in one of these supervisor roles,'" says Lawrence. "I didn't necessarily apply for the role. I was just tapped on the shoulder and asked if I would be interested. So the timing worked out pretty well for me."

Lawrence describes a typical day in engineering management as helping his team to reach their goals.

“There’s a lot of interacting with people on my team,” says Lawrence. “I'm really trying to be fully focused on how I can set my team up for success. So I’m taking time to understand the objectives of what my team is working on, what are their struggles, what is blocking their progress, and what do they need to be successful.”

Lawrence describes his role in Lockheed Martin as a "servant leader."

“There’s a lot of communication involved,” says Lawrence. “I'm providing some one-way communication which flows down from the top, and then a lot of dialog from various team members on the problems we're working on to make sure everyone is appropriately tasked.”

Lawrence believes his master’s degree in engineering management was instrumental in preparing him for his management position.

“Coming out of the engineering management Program, I felt very prepared to manage people and scope the technical and cost implications of a project,” says Lawrence. “It really helped me develop a big picture mindset. Before the master’s Program, I felt like I was always in the weeds looking at a single technical problem. But, through the accumulation of all the coursework in the Program, I learned how to consider the customer’s point of view, the business objectives and developing more efficient processes. I think those are the universal lessons from the Program. It’s certainly benefited me in the space industry, but I'm sure it could benefit others who are in other industries as well.”

Lawrence believes the investment he made in himself by studying for his master’s degree will continue to pay dividends long into the future. But for the time being, he's thoroughly enjoying his current role.

“Right now, I feel fully engaged and fully tasked working with my teams," says Lawrence. "Maybe my next step will be into a senior manager role, but at this stage in my career, I'm very happy in my current management role."

Engineering Management — Just Do It

Lawrence advises anyone interested in studying for their Master of Engineering in Engineering Management not to overthink it and, "Just do it."

“I don't think there are any cons with the Program,” says Lawrence. “It is a blend of technical and business coursework. So whether a person is going to remain an individual contributor or has ambitions to become a supervisor in their career, I think no matter which route you follow, this Program will help you add more value to the company you work for.”

Learn More About the EMP

To learn more about how the EMP at CU Boulder can help you take your engineering career to new heights, visit the Master of Engineering in Engineering Management Program page on our website.