Megan Aikman:  As of the spring of 2005 Megan Aikman had just recently graduated with her Masters from the University of Colorado at Boulder. During her two and a half years in Boulder, Megan focused on gender issues and interpretation of women on Greek pottery. Megan believes that the best way to teach ancient art is in the museum, where a more diverse and otherwise uninterested audience might become enthralled.

Jessika Akmenkalns: As of Spring 2005, Jessika Akmenkalns is concluding her first year in the Masters program for Classical Art and Archaeology. She received her BA in Anthropology from the University of Colorado. Jessika has particular interest in Greek sculpture and ceramics of the Archaic and Classical periods. She is also interested in issues concerning the contrasts between anthropological and Classical archaeology and how the two disciplines coincide.

Jeff Gingras: As of Spring 2005, Jeff Gingras is completing his first year as a Masters student in Classical Art and Archaeology at the University of Colorado at Boulder. He received his BA in Classics from the University of Wisconsin-Madison in 2004. Jeff is fascinated by most aspects of Greek and Roman archaeology, but is particularly interested in the study of ceramics. In the future Jeff hopes to continue his study of Classical Archaeology.

Gina Hander: As of Spring 2005, Gina Hander is completing the second semester of her MA program in Art History. Her focus is Chinese art and how it has been influenced through trade and exposure with Northern and Western cultures through the Silk Road, the Fur Route, and through China's permeable northern borders. This summer, Gina will be traveling to Vietnam as a program assistant for a University of Colorado study abroad program and will be studying and teaching about the art and architecture of Vietnam. Gina will finish her Masters degree next spring and plans to work in the field of museum studies.

Heather McKeown: As of Spring 2005, Heather McKeown is concluding her first year in the Masters program for Museum and Field Studies, focusing in Classical Art and Archaeology. She received her BA in Liberal Studies from California State University, Hayward. Heather has particular interest in how museums can better utilize collections of classical materials to entice students to become involved in their study. She will be spending the summer on an archaeological dig in Pylos, Greece.

Crystal Rome: As of spring 2005, Crystal Rome is completing her second year of study at the University of Colorado as a Classics undergraduate. As a child, Crystal dreamed of becoming an archaeologist. Now, although she still harbors an abiding love of archaeology, her focus has shifted to the pursuit of a career in the conservation of ancient artifacts. This summer Crystal has plans to travel to London to work as an intern at the British Museum.

Stephanie Ann Smith: As of the Spring of 2005, Stephanie Smith is completing her first year of the M.A. program in Classical Art and Archaeology at the University of Colorado at Boulder. Stephanie earned her B.A. in Anthropology at Michigan State University. She is particularly interested in the exchange of artistic and architectural expression as well as socio-cultural practices between the varied peoples of the Roman Empire. Her scope of interest includes provincial areas such as Roman Britain and regions of the Eastern Empire. Stephanie hopes to continue her experience in the field as well as the museum; she plans to participate in archaeological fieldwork in Italy and areas of provincial Roman occupation in the near future.

Sarah Thomas: As of Spring 2005, Sarah Thomas is completing her final semester as a Masters student in Classical Art and Archaeology. Over the past two years, Sarah has focused on bringing her Classical education to the field of museum studies, in particular museum education as a tool for adult and family learning. Next year, Sarah will be attending the Getty Conservation Institute as a Graduate Intern where she will further pursue the conservation and interpretation of ancient artifacts.

Summer Trentin: As of the spring of 2005, Summer Trentin is completing the last semester of her M.A. program in Classical Art and Archaeology. Summer earned her B.A. in Art and Secondary Education from Cornell College, where she focused on studio art, particularly painting. She is especially interested in Roman painting and domestic architecture, including the ways in which function and decoration complement one another in the Roman domus , ancient painting technique, and the fresco workshops of Roman Campania. Summer hopes to pursue further education in the field of Ancient Art History. 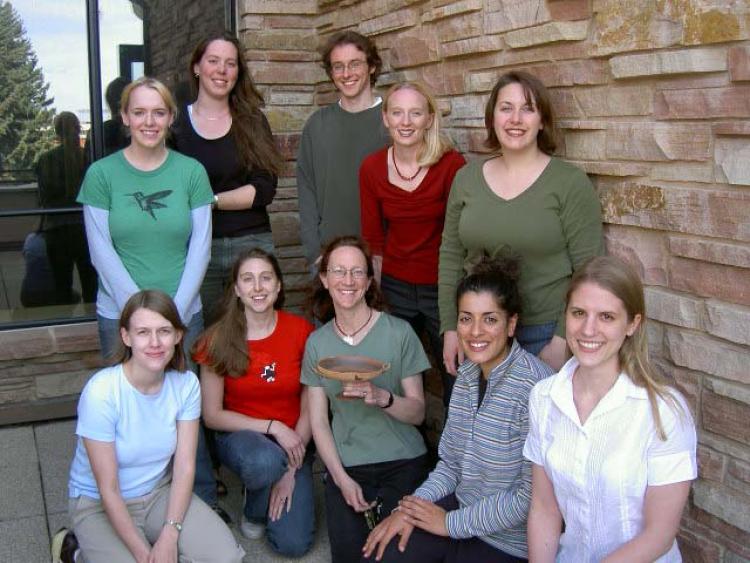