Waiting for the Next Boom

Whose Land is it Anyway?

An enduring legacy of the first boom was the establishment of land ownership in Shale Country that persists to today. Although prospectors staked more than 30,000 claims on over 4 million acres throughout Shale Country during the first rush, they focused on escarpments and elevations where the dark-colored rock was exposed or easily accessible. Very few mining claims were filed in the Piceance Creek Basin, where the rich deposits were generally too deep for early prospectors to discover. But the presence of water in this arid country did attract homesteaders. 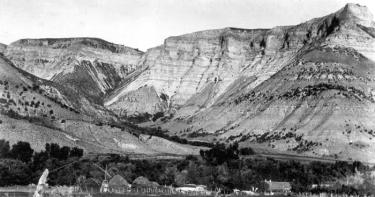 Both before and during the early-twentieth-century boom, settlers filled in the valley bottoms along the Piceance Creek and its tributaries and set about the hard work of proving up their homesteads. Those who successfully made a go of it won the title to their land, and through this homesteading process much of the valley land passed into private hands. However, not every homesteader received the same title to the land. Those who filed before the passage of the Stock Raising Homestead Act of 1916 obtained the deed to both the land’s surface and any minerals beneath. Those who filed after 1916 settled on split estates, where only the surface of the land belonged to the homesteader and the government retained rights to any minerals found beneath, with access to and development of those mineral governed by federal mining law. 1

In the years after the boom faded, a small cadre of farsighted and deep-pocketed speculators and energy companies set about purchasing claims throughout Shale Country, securing potentially rich holdings in anticipation of a day when oil shale could be worked profitably. They bought, often at bargain prices, many of the mineral claims that had been filed before the 1920 leasing regime. And as prospectors began to discover some of the deep, rich deposits under the valley bottomlands, some of these investors also purchased homestead deeds that predated the 1916 split estate system.

Although these purchases were sometimes islands of private property surrounded by a sea of federal land, too small for large commercial-scale development on their own (especially in the days when massive underground or open pit mines seemed the only feasible way to get at the shale), their acquisition gave the buyer a foothold in Shale Country. Through land-swaps with the government or other landholders, these individual parcels could be parlayed into consolidated blocks of land that promised to become major oil shale fields in the future. These savvy investors, true believers that oil shale would one day be a significant part of the nation’s energy picture, intended to be well-positioned to take advantage when that day came.

In the end, after all the hullabaloo and heartbreak, this large-scale transfer of valuable tracts of resource-rich land out of the public domain and into private ownership, facilitated by early mining and homesteading claims, proved to be the most significant legacy of the first oil shale boom.  Today private property owners, mainly energy companies, control about 20% of the land that overlies oil shale deposits in the Piceance Basin and the associated mineral rights – enough, according to some, to get an oil shale industry off the ground without the incentive of federal leases. 2

Although it may not always look like it on the surface, today about 20% of Shale Country is owned by private individuals and corporations. When energy companies bought the title to one of the area’s original homesteads (one that predated the 1916 split estate law and thus owned the mineral rights to the land), they often provided lease-back agreements that allowed for the land’s continued operation as a ranch. During the Depression, when a number of homesteads reverted to federal land because their occupants could not pay the taxes, these lease-back offers must have been especially attractive. 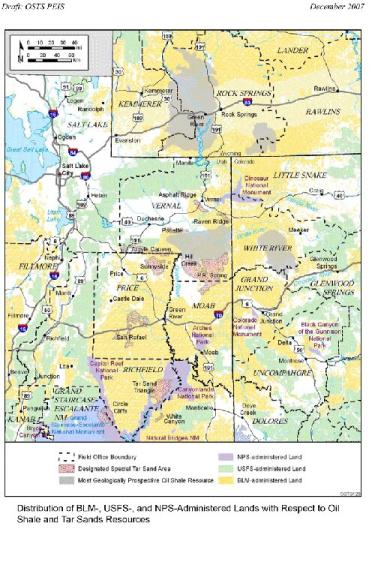 Other Western Slope residents – notably Dr. Tell Ertl and John W. Savage Sr – purchased old claims in anticipation of the day when their value would once again rise. In the decades after World War II, Ertl, Savage, and their heirs tracked down the descendents of the original prospectors, fought legal battles with the Department of Interior over the legitimacy of their claims, and diligently proved up and maintained the claims until by 1980 the Ertl family controlled 67% and the Savage family 13% of the individually-owned oil shale lands in the Piceance Basin. Their efforts paid off that year when the US Supreme Court ruled that the government was required to honor oil shale claims originally filed before 1920, clearing the way for the families to lease their property to energy companies willing to pay a premium to join the second oil shale rush.

With these substantial private holdings in Shale Country – more than 200,000 total acres by some counts – former Garfield County Commissioner Larry McCown, an oil shale worker during the last boom, thinks that leases on public land might not be necessary for the development of oil shale: “What everybody always seems to forget is that all the major oil shale players the last time around still have sizable private holdings where they could start a project without the BLM.”3

Energy companies and oil shale advocates acknowledge that significant resources are in private hands, but they have consistently maintained that the richest deposits – meaning those that will yield the most oil and be most likely to provide profit margins capable of supporting the high startup costs of a new industry – underlie federal lands.

Characteristic of lands in the American West, the richest and most commercially viable oil shale lands in Shale Country are under federal auspices. Federal lands comprise roughly 72 percent of the total oil shale acreage in Shale Country and roughly 80 percent of the total in-place resources. The State of Utah controls about 8 percent of the land in the Uinta Basin and the State of Wyoming controls a similar number of the oil shale lands in their state. 4 In order for energy companies to create a viable oil shale industry they will have to adhere to the leasing restrictions set by the Bureau of Land management and state agencies.

Although energy companies maintain that they could start an industry on private lands alone, for the companies to make the profits that they seek they will need to work with the federal and state governments to gain access to these valuable oil shale deposits. The government worked diligently to maintain and expand their holdings in Shale Country and they control the most promising lands for oil shale development.