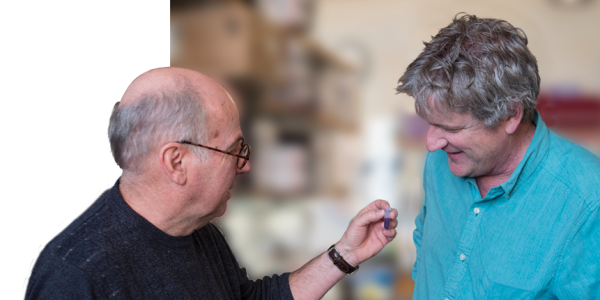 The human papillomavirus (HPV) vaccine was a landmark first in cancer prevention, protecting women against the virus that causes cervical cancers. Yet this life-saving vaccine and many others remain inaccessible to a large part of the developing world due to their high cost and need for refrigeration. Many have tried to overcome these barriers to universal vaccination, but thus far, all have fallen short.

Now BioFrontiers scientist Bob Garcea and collaborator, Ted Randolph, promise to finally break down these barriers with a fresh, cross-disciplinary approach. Blending their expertise in virology and chemical engineering, with a dash of ingenuity, they are redesigning low-cost, heat-stable vaccines with unprecedented success. Starting with HPV, their revolutionary vaccine designs could transform vaccine programs worldwide to serve regions that need them most.

Bob Garcea has been a transformative force in vaccine development since the 1980s. By studying viral structures, he has discovered new ways to simplify vaccines that drastically reduce their cost and increase their reach. His discovery of virus-like particles (VLPs) led to next-generation vaccines that are more affordable and safer than traditional live-attenuated or heat-killed virus vaccines, and have since become the new gold standard in vaccine design.

Now Bob promises to revolutionize vaccines once again with his discovery of viral capsomeres. “You don’t need the whole VLP to elicit an immune response,” says Bob. “Building blocks of the viral shell, termed capsomeres, are just as good at sensitizing the immune system against HPV.” These capsomeres are so simple they can be churned out en masse by bacteria, whereas VLPs require more complex biological production systems that are four times as costly. In addition, complex VLP vaccines are unstable, requiring liquid suspension and refrigeration for preservation. Meanwhile, simple capsomeres are much more stable, lending themselves to a new heat-tolerant formulation. While Bob had no experience with vaccine formulations himself, he knew someone in a neighboring lab who did. “Our BioFrontiers lab happened to be next to chemical engineers. They come at problems in a very different way than we do. For them, it’s about practicality,” says Bob. “In particular, Ted Randolph had developed a technique for thermo-stabilizing proteins in powder form.”

Ted Randolph specializes in the practical matters of converting molecular discoveries into viable treatments. Biological proteins are notoriously unstable, particularly when exposed to heat. Ted’s job is to prevent them from degrading throughout the manufacture, storage, and distribution processes. The stakes are high—any failures can compromise drug safety or efficacy, putting patients’ lives at risk.

“Meeting the stringent requirements for chemical and conformational stability during shelf life is a daunting task,” says Ted. Exploring how and why proteins go bad, he stabilizes them with chemical engineering solutions. His cutting-edge technique to freeze-dry proteins into powder form has achieved unprecedented heat-stability, enduring temperatures as high as 120 degrees Fahrenheit for 3 to 4 months.

“We brought our capsomeres over to Ted’s lab, and his team quickly made thermostable capsomere powders that equaled the ability of the current HPV vaccine to sensitize the immune system,” Bob says.

From Discovery to the Real-World

Recognizing the revolutionary nature of their breakthrough, and its potential to finally overcome barriers to universal vaccination, the duo teamed up with Al Weimer of the Department of Chemical and Biological Engineering in a unique collaboration that secured a $1.1 million grant from the Bill & Melinda Gates Foundation in 2016. The three investigators work in the Jennie Smoly Caruthers Biotechnology Building (JSCBB) at CU Boulder, but their research areas have very different emphases, and the grant has helped them work together and collaborate to translate their discovery into real-world vaccines. “It’s really merging three different people with three different sets of expertise into one project,” Garcea says. Ted adds, “This formulation represents a breakthrough technology previously unattainable for vaccines, allowing for safe and effective distribution wherever needed."

Bob and Ted also founded the spin-off company VitraVax Inc., turning to CU’s Technology Transfer Office in conjunction with the Innovation Center of the Rockies to get up and running. Offering essential guidance in identifying business drivers, finding equity support and licensing intellectual property, among other new challenges, these resources were instrumental in successfully launching the new venture.

With low-cost, heat-stable vaccines in a single dose, this BioFrontiers inspired team is aiming for the holy grail of vaccination. Their revolution in vaccine design would overcome the barriers to universal vaccination and save millions of lives, particularly in developing nations.

Current disparities in access to HPV vaccination deprive millions of women and men worldwide of this life-saving breakthrough in cancer prevention. “In cancer, an ounce of prevention is worth a pound of cure,” says Bob, explaining that HPV vaccination offers
a more realistic strategy to save lives in areas without the resources for cervical cancer screening or treatments.

In addition, the team’s new techniqu 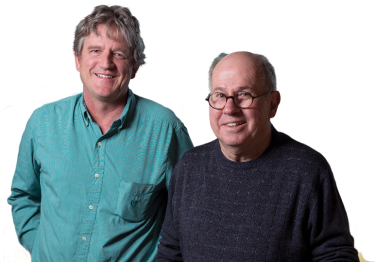 e could lead to new, more protective HPV vaccines by lowering R&D costs. “Although a majority of HPV-related cancers result from HPV16 and
18 infections, another 15 different strains can be oncogenic,” Bob says. “Our ability to fight this disease is currently limited by manufacturing and distribution costs as well as the breadth
of coverage.”

Beyond HPV, the team is laying the foundation for an entirely new paradigm in vaccinology that could impact all vaccines. “Our decades of work aimed at better HPV vaccines may become more about a process than a product—a way of making many types of vaccines rather than a single vaccine itself,” Bob explains. With their elegant combination of virology and chemical engineering, Bob and Ted’s next-generation vaccines have the potential to rewrite the book on disease prevention worldwide. Their admirable work exemplifies the BioFrontiers mission to drive medical advances through innovative cross-disciplinary science. 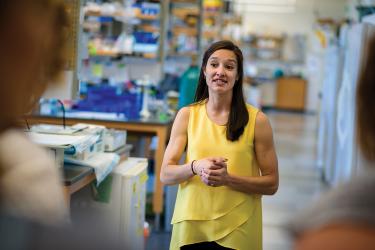 nds business and civic leaders on the road for a two-day, one-night “Colorado Experience”, connecting them to big ideas and communities in every corner of the state. As part of the May 2018 event, nearly three dozen Colorado Experience delegates heard from leaders, faculty, postdoctoral fellows and IQ Biology graduate students, in an afternoon packed with information about the interdisciplinary innovations happening at BioFrontiers.