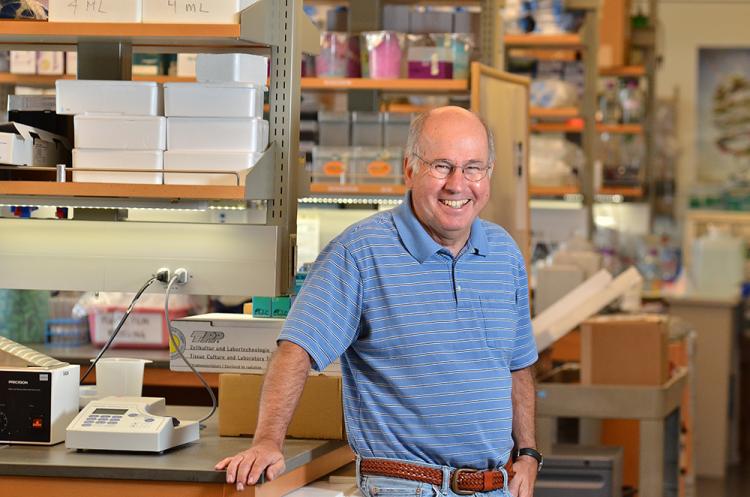 The University of Colorado Boulder has received a $1.1 million grant from the Bill & Melinda Gates Foundation to develop next-generation vaccines that require no refrigeration and defend against infectious diseases with just one shot.

If successful, those advancements could radically transform the difficult task of dispensing life-saving immunizations in developing countries — and improve convenience in every part of the world.

Professor Bob Garcea of the Department of Molecular, Cellular and Developmental Biology and the BioFrontiers Institute has teamed up with Professors Ted Randolph and Al Weimer of the Department of Chemical and Biological Engineering in a unique collaboration that applies a wide range of skillsets and ideas to the pressing challenge of delivering vaccines to patients in developing countries. All three investigators work in the Jennie Smoly Caruthers Biotechnology Building (JSCBB) at CU Boulder, but their research areas have very different emphases.

In Garcea’s lab, located in the Jean and Jack Thompson Vaccine Research Laboratories of the JSCBB, investigators work on new vaccines such as those for human papillomavirus, a leading cause of cervical cancer that is particularly devastating to women in developing countries.

One corridor away, Randolph’s team, which focuses on creating stable dosage forms for therapeutic proteins and vaccines, developed a process for making vaccines thermostable, or resistant to damage from heat or cold. In this glassy powder state, the vaccine can be stored at temperatures as high as 120 degrees Fahrenheit for three to four months without losing efficacy, Randolph said.

The two began collaborating about two years ago and even formed a spinoff company, Vitravax Inc., which is seeing successful results in vaccine studies conducted in mice.

The Gates Foundation grant will take these innovations a step further by combining the thermostable vaccine powders with techniques developed in the Weimer lab that allow uniform nanoscopic protective layers of aluminum oxide to be applied to vaccine microparticles. This coating process, called atomic layer deposition, not only provides a nanometer-thick protective barrier for the vaccine particles but also helps trigger the body’s immune response.

The trio is now forming extended release, multilayer microparticulate vaccine dosage forms, composed of an inner core of stabilized vaccine coated with aluminum oxide layers and an outer layer of vaccine, all embedded in a glassy powder. When the formulation is injected, the outer layer provides an initial vaccine dose. Next, the aluminum oxide layer slowly dissolves, eventually releasing the inner core which acts as a second dose of vaccine. Patients receive their second or third “dose” without ever knowing it and without a return trip to the doctor.

Although each step of the process has worked independently, researchers cautioned that moving from small test batches in the lab to manufacturing millions of vaccines for public use is a challenging process that may not succeed quickly – or at all.

“We’ve done many of the individual parts of this project,” Randolph said. “Now we’ve got to put those pieces together, and have it work.”

Still, investigators say they’re optimistic about the collaboration, which might never have happened if not for their proximity on CU-Boulder’s East Campus and the interdisciplinary mission of the BioFrontiers Institute, which seeks to drive innovation by combining researchers from different fields.

The Randolph and Weimer Labs are part of the Department of Chemical and Biological Engineering. The Garcea lab is part of the Department of Molecular, Cellular and Developmental Biology at CU Boulder and the BioFrontiers Institute.  At the University of Colorado BioFrontiers Institute, researchers from the life sciences, physical sciences, computer science and engineering are working together to uncover new knowledge at the frontiers of science and partnering with industry to make their discoveries relevant.