In the spring of 2020, campus leadership announced the final decisions relating to the campus general fund fringe benefits shared solution (often called “B-ROLL”). This involved localizing benefits expenses which had previously been paid centrally, as well as allocating a combination of continuing and temporary benefits budget to cover these expenses. Although the college had almost of all of its benefits paid by sending continuing budget to campus in prior years, this change would impact situations in which benefits had not been paid to campus, or where the prior policy regarding benefits allowed for exceptions with temporary salary. To aid those situations the campus proposed a Shared Solution approach to determine how much budget would be allocated to address the “new” expenses that units would incur. To determine the budget allocation, working groups of faculty and staff from across campus were created to make recommendations to campus. These working groups were based on a categorization of the “situations” within the general fund where there were often unpaid benefits: 1) DAICR; 2) Faculty startups and cost-shares (later including faculty retentions); 3) Academic Program Allocations (APAs, formerly course and program fees); and 4) all speedtypes that did not fall into the previous three categories, called “General” speedtypes.

It is important to note that the federal government requires the campus to charge benefits on all salary dollars paid, so “exceptions” to the prior benefits policy does not mean that benefits were not charged. It merely means that they were paid by campus rather than the local unit. The increasing amount of this activity is one driving factor behind the localization of benefits and shared solution.

The college received $194,666 in continuing budget and $194,666 in temporary budget (reference DAICR tab herein for detailed department allocations). The college contributed $3,140 in continuing budget to square up an adjustment in the calculation by campus, for a total of $197,806. This funding, both continuing and temporary budget, was transferred directly to the fourteen units which had calculated benefits deficits in FY19. When the temporary funding expires after FY23, the units will be left with the $197,806 in continuing benefits funding. Units that did not have calculated benefits deficits in their DAICR speedtypes in FY19 did not receive any funding.

The campus shared solution information includes the following graphic, representing the funding allocations for speedtypes in the DAICR category. It is meant to show the split between continuing and temporary funding provided by campus starting in FY21. 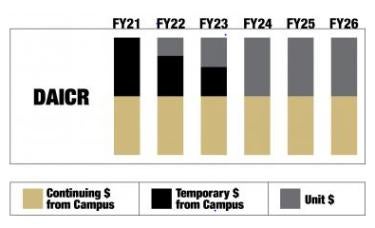 Note: An inaccurate representation of the DAICR shared solution budget allocation. The use of a Stacked Bar Chart, in which all segments add to 100%, misrepresents the budget allocation. The college requested that BFP revise the formatting to avoid confusion but was unsuccessful in that pursuit. As a result, it is necessary to provide clarity through this document.

This graphic is misleading because it implies that the campus will adjust continuing funding up or down according to the DAICR total, and always at 50% of DAICR benefits expenses. The actual allocation is based on FY19 activity and the continuing budget allocation is a fixed amount of $197,806; it will NOT be adjusted parallel to changes in departmental DAICR or actual benefits expenses. It is likely that DAICR will increase due to the recent strong growth on sponsored project research. So, it is important to understand that the gold bar in the graphic above will not always be 50% of actual activity. It is stagnant at $197,806 and it will not increase (or decrease) with DAICR changes. A more accurate representation of the DAICR shared solution from the departmental perspective in Figure 1b.: 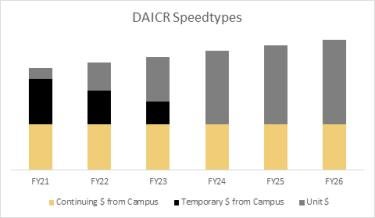 Figure 1b: An accurate representation of the continuing budget funding approved for DAICR

The continuing budget allocated from campus is unchanging from year to year, the temporary budget is declining on a pre-determined schedule through FY2023, and the unit is responsible for everything above this combined amount. There is no adjustment to the campus funding regardless of the level of expense.

Actual benefits expenses in startup and retention speedtypes in effect before January 15, 2020, will be fully covered for a period of five years (FY21-FY25), with the costs split 50/50 between the campus and college. After FY25, the college will determine how to utilize this continuing funding to support faculty startups. Startups and retentions created after January 15, 2020 are responsible for covering their benefits expenses out of their own funding.

The campus shared solution information includes the following graphic, representing the funding allocations for speedtypes in the startup/retention category: 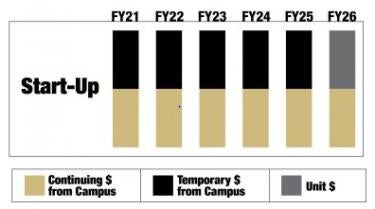 The main confusion arising from this graphic from the department perspective is the implication that continuing budget will be allocated to individual startup and retention speedtypes. It also indicates that continuing funding will be available for individual startup and retention benefits after FY25. The continuing budget allocation is fixed and calculated based on FY19 activity, and the allocation is being held by the college. This continuing budget is used to fund temporary commitments to individual faculty startups. Continuing budget is not allocated to faculty startup accounts because they are term-limited by policy and activity is inherently temporary. Effective FY26, the college will use the continuing funding to supplement faculty research activities but the exact manner is to be determined at this time.

A more useful graphic of how startups and retentions will work is Figure 2b below. This flow chart from campus demonstrates how funds will flow to startup and retention speedtypes. Benefits will be charged to the individual speedtypes, and at each month end campus will reimburse the full amount from their holding speedtype, and then reclaim 50% of the amount from the college. The end effect is that the college and campus each cover 50% of actual expenses. 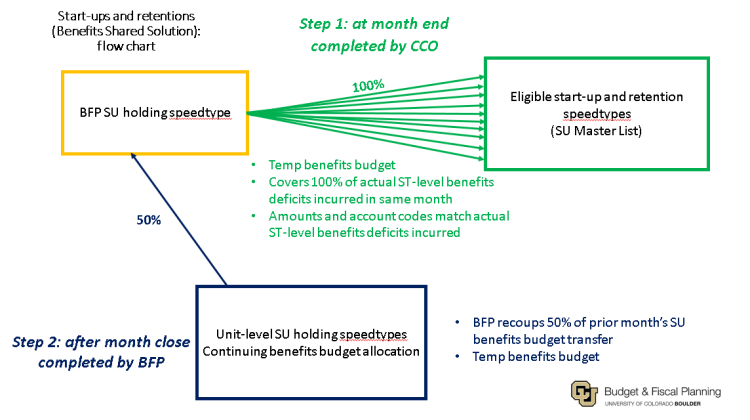 The campus arrived at the college’s allocation for the General category by netting together all the calculated benefits surpluses and deficits across the college’s General speedtypes in FY19. In that year there were approximately 800 General speedtypes with salary activity. The college allocation was based on the net total of benefits balances across these 800 speedtypes, calculated by employee type. The table below is a simple example of how this calculation worked, based on a single (fictional) unit:

In this example, despite the majority of the rows having calculated deficits, totaling $85, the unit would receive only $6, largely because of the surplus in the first row.

This same logic applied to the allocation to Arts and Sciences. Approximately 400 of the 800 speedtypes had calculated benefits deficits, totaling over $2.4M. However, the General category in A&S includes departmental salary speedtypes, which often have surpluses due to vacancies, and unallocated salary budget held in the Dean’s office for faculty and staff lines. The actual calculation by campus is below, sorted by division and department:

The net of all the benefits surpluses and deficits across the 800 General speedtypes in FY19 was only ($56,980). The campus adjusted this amount to account for benefit rate changes and merit between FY2019 and the actual allocation in FY21, for a calculated total of ($105,968). As mentioned above, the college received half of this balance ($52,984) in continuing funding and half in temporary funding which will eventually decline to $0. This funding is held in the Dean’s office. Once the temporary funding expires, the college with be left with just the $52,984 continuing budget, which is intended to cover the $2.4M deficits in 400 speedtypes.

The campus shared solution information includes the following graphic, representing the funding allocations for speedtypes in the General category: 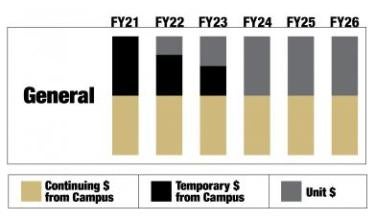 Note: An inaccurate representation of the General shared solution budget allocation. The use of a Stacked Bar Chart, in which all segments add to 100%, misrepresents the budget allocation. The college requested that BFP revise the formatting to avoid confusion but was unsuccessful in that pursuit. As a result, it is necessary to provide clarity through this document.

As with the DAICR graphic, this is misleading because it implies the continuing funding will be equal to 50% of the activity in General speedtypes each year. Instead, it merely represents the split between temporary and continuing budget provided by campus to the college. It is fixed based on FY19 activity and will not be adjusted for actual activity. It is further confusing to departments because it may imply that continuing and/or temporary funding will be coming to their speedtypes or departments, when it in fact, after netting surpluses and deficits, results in $52,984 going to the college.

Most of the deficits in the General category are the result of temporary or unbudgeted salary activity. Surpluses generally result from positions on continuing funding where there are vacancies or leaves and replacements. This means that both the amounts and speedtypes in question are not consistent from year to year. FY2019 activity cannot be assumed to be representative of current salary activity. Because continuing budget essentially represents permanent funding, it would not be good budget practice to allocate continuing budget to these variable benefits deficits. The shared solution failed to consider the types of speedtypes in the college’s General category, or the implications of netting the surpluses and deficits. The resulting allocation of $56,980 will not be able to solve a $500,000 deficit in one department. This has caused great confusion and a false belief that campus didn’t follow through as promised. Considering the scale of the deficits and the small amount of funding available, there is no way to allocate this funding in a systematic or meaningful way. It is also unclear whether it is equitable to use the college surpluses to fill the deficits, because that would involve transferring funding between units and divisions, with the added complication that the amounts will not be known until year-end and will be different from year to year. Due to these numerous issues with the General allocation, units are responsible for covering their own benefits expenses in these speedtypes.

Campus is providing a process through which departments or units can petition for additional funds to address deficits incurred in this category. These funds will be temporary and available through FY23.